Saint original name Giovanni di Bernardone. ?1181--1226, Italian monk; founder of the Franciscan order of friars. He is remembered for his humility and love for all creation and was the first person to exhibit stigmata (1224). Feast day: Oct. 4
Collins Discovery Encyclopedia, 1st edition © HarperCollins Publishers 2005 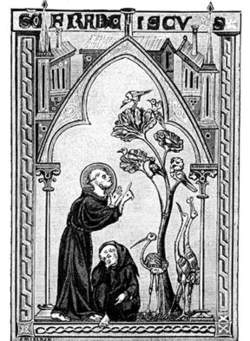 Feedback
Flashcards & Bookmarks ?
Please log in or register to use Flashcards and Bookmarks. You can also log in with
Flashcards ?
My bookmarks ?
+ Add current page to bookmarks
Mentioned in ?
References in periodicals archive ?
Little wonder, then, that Pope Francis adopted his name from St Francis of Assisi.
An interfaith dialogue, 800 years ago
What type of school is The Academy of St Francis of Assisi and what are the admission criteria?
Liverpool : Ratings The Academy of St Francis of Assisi; Find out how The Academy of St Francis of Assisi rates compared to other secondary schools in Liverpool with our school ratings
Francis of Assisi. Sometimes, friends will visit so they can sit on the benches to pray and discuss Scripture together.
Gardens planted with prayers
a previous Newmarket raider in the bendigo Cup, the luca Cumani-trained Sahara Sun, did subsequently contest the Melbourne Cup, but Francis Of assisi instead tackles this 1m5f event off a longer break.
Scottish and Assisi the finale to Appleby's amazing adventure
Francis of Assisi is widely acknowledged as the patron saint of ecology in Christian world today.
How St. Francis influenced Pope Francis' Laudato Si
Shocked parents set up a petition to save the playgroup and, after hearing about their plight, The Reverend Liz Jackson, the vicar at St Francis of Assisi, stepped forward with her offer.
Axe-threat playgroup thriving in new home
THE CAMBRIDGE COMPANION TO FRANCIS OF ASSISI. Edited by Michael J.
The Cambridge Companion to Francis of Assisi
He told an assembled audience at the Vatican that he was immediately inspired to take the name of St Francis of Assisi because of his work for peace and the poor.
I NEVER WANT TO FORGET THE POOR; St Francis inspired Pope
St Francis of Assisi called all creatures his brothers and sisters, and even preached to the birds and supposedly persuaded a wolf to stop attacking some locals if they agreed to feed the wolf.
Life is precious
Francis of Assisi. After 30 years of discussion and study, the bishops voted to continue the discrimination against gays, lesbians, bisexuals and
Unconditional love
Finally, let's not forget Los Angeles (short for Reina de los Angeles or Queen of Angels), San Francisco (named after Saint Francis of Assisi), St.
"Aint" and other politically correct words
(The Pope never approved of the Children's Crusade.) Francis of Assisi is an inspiring heroic figure who appears in this story; the connection is made that Blanche's faith, like that of Francis of Assisi, was based on a revulsion for the wealth and power of the Church.
McDonnell, Kathleen. 1212; year of the journey