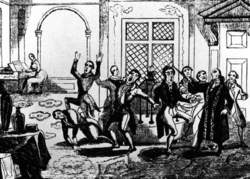 In this eighteenth-century depiction, Franz Anton Mesmer “mesmerizes” people using his ability to manipulate a universal magnetic fluid that could put subjects into a trance. Today, this is more commonly known as hypnotism. Fortean Picture Library.

Franz Anton Mesmer, primarily remembered today for the term mesmerism, a somewhat archaic name for hypnotism, stands at the fountainhead of the contemporary movements that emphasize extraordinary and miraculous healing. Mesmer was born in Austria and studied medicine at Vienna. During his student days he developed the ideas with which he would later be identified, all based around the notion of a universal magnetic fluid that permeated the cosmos. This fluid accounted for the truth of astrology (the influence of the planets on human life), and it could be manipulated by a knowledgeable person to place others in a trance or cause their healing. Mesmer apparently developed this idea after watching a healer who applied magnets to his patients’ bodies. Based on his ideas, he developed a medical practice.

Eventually, Mesmer moved to Paris, where he became a successful physician with an increasingly wealthy and influential clientele. By 1784 his activities had become controversial, and his influence had grown to such a point that a commission of doctors and scientists was appointed to examine his work. The commission concluded that there was no evidence of any universal fluid, then termed animal magnetism, and that Mesmer’s healing work was due to mere suggestion and the imagination of the patients.

The commission report did much to blunt Mesmer’s success, but by no means did it suppress an allegiance to his ideas. In the early decades of the nineteenth century, people dedicated to Mesmer’s understanding of animal magnetism created a popular movement in both Europe and North America. The understanding of animal magnetism became the basis of a revived Esoteric community that would build on Mesmer’s scientific approach rather than on supernatural ideas of spirits and demons.

Mesmer himself retired some time after the commission report and lived quietly in Switzerland, where he died in 1815. The movement he started is considered the impetus for the modern practice of hypnotism, a term used when the practice of assisting others into a trancelike state was shorn of the idea of animal magnetism. Some understanding of animal magnetism, although now known by alternative names such as “universal force,” undergirds the practice of spiritual healing in the Esoteric community. 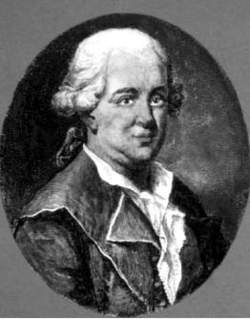 Franz Anton Mesmer was born in the village of Iznang near Lake Constance, Austria, in 1734. He studied theology and medicine. At the age of thirty-two he obtained a degree in medicine from Vienna University, the subject of his thesis being the magnetic influence of the planets on the human body (De planetarum Influxu—“The Influence of the Stars and Planets as Creative Powers”). This interest was inspired by the teachings of Paracelsus. Mesmer became convinced that there was a healing magnetic power in his own hands. He termed this force “animal magnetism,” first using the term in 1775. The idea that a magnet had curative powers had been quite common in the Middle Ages, with people believing that a magnet or magnetic lodestone could literally draw out illness from the human body.

Mesmer believed that the cures which he brought about, especially on hysterical patients, were the result of entirely natural phenomena. News of his “magnetic séances” spread rapidly and people flocked to his home from all over Europe. However, the conventional medical fraternity accused him of practicing magic, and in 1778 he was ordered to leave Austria. He went to Paris.

The historian Deleuze describes Mesmer’s methods, saying, “In the middle of a large room stood an oak tub—the famous baquet, four or five feet in diameter and one foot deep; it was closed by a lid made in two pieces, and encased in another tub or bucket. At the bottom of the tub a number of bottles were laid in convergent rows, so that the neck of each bottle turned towards the center. Other bottles filled with magnetized water tightly corked down were laid in divergent rows were laid with their necks turned outwards. Several rows were thus piled up and the apparatus was then pronounced to be at high pressure. The tub was filled with water, to which was sometimes added powdered glass and iron filings. There were also some dry tubs, that is, prepared in the same manner but without any additional water. The lid was perforated to admit the passage of movable bent iron rods, which could be applied to different parts of the patients’ bodies. A long rope was also fastened to a ring in the lid, and this the patients placed loosely around their limbs … The patients drew near to one another, touching hands, arms, knees, or feet. The handsomest, youngest and most robust magnetizers held also an iron rod with which they touched the dilatory or stubborn patients … In the midst of the panting, quivering throng, Mesmer, dressed in a lilac coat, moved about extending a magic wand towards the least suffering, halting in front of the most violently excited and gazing steadfastly into their eyes, while he held their hands in his, bringing the middle fingers in immediate contact, to establish the communication.” This communication became known as “Mesmerism” and was the forerunner of hypnotism.

Mesmer and his cures became immensely popular but many considered him a charlatan. By 1784, the French government appointed a special commission of scientists and physicians to investigate his work, though he himself refused to submit to them. The commission therefore investigated one of his disciples, Dr. Delson. Among the investigators were the American Ambassador to France Benjamin Franklin, the chemist Lavoisier, and Guillotin, inventor of the guillotine. The commission reported that Mesmer did indeed affect cures but attributed them not to animal magnetism but to some unknown physiological cause. As a result of this, Mesmer was lumped together with other quacks and his popularity waned. He finally retired to private life in Versailles. He moved to Switzerland in 1814 and took up residence in a village near his native Iznang. He died there in 1815.

Feedback
Flashcards & Bookmarks ?
Please log in or register to use Flashcards and Bookmarks. You can also log in with
Flashcards ?
My bookmarks ?
+ Add current page to bookmarks
Mentioned in ?
References in periodicals archive ?
(2) Franz Anton Mesmer (1734-1815), medico austriaco, foi o criador do magnetismo animal.
On the condemnation of animal magnetism: reviewing the history of Psychology/ Sobre a condenacao do magnetismo animal: revisitando a historia da Psicologia
Following the introduction is a valuable background on trancing in Europe and the United States, with documentation of significant historical points and individuals in the history of trancing: saint Augustine, the Roman Church in the Middle Ages, the Enlightenment, the work of Franz Anton Mesmer (1734-1815; see the subsequent expression "mesmerized" derived from Mesmer's work), Jean Martin Charcot (1825-93), Pierre Janet (1859-1947; hypnosis), and the recent revival of interest over the last thirty years in multiple personality disorder.
Deep Listeners: Music, Emotion, and Trancing
Gabay (School of Arts and Education, La Trobe University, Bendigo, Victoria, Australia) is an historical survey tracing the influences of philosopher, theologian, and iconoclast Emanuel Swedenborg, and Franz Anton Mesmer with his "Animal Magnetism" hypnosis, upon European and American culture.
The Covert Enlightenment
Paradoxically, the once mesmerising therapeutics of the German physician Franz Anton Mesmer now survive mainly in Poe's tales and in the English verb "to mesmerise', which has no equivalent in German, French of Italian.
Mesmerising revelations