Free and Accepted Order of Freemasons 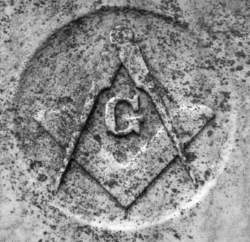 The symbol of the Freemasons chiseled into a nineteenth-century gravestone. The Masons and their beliefs have become more public in recent years, it seems, but conspiracists claim they are still a secret brotherhood with designs on world domination.

Free and Accepted Order of Freemasons

Servants of their Supreme Architect of the Universe, Lucifer, the Freemasons have plotted to take over the world since they labored on Solomon’s temple.

As the Freemasons enter the new millennium, the order’s membership in the United States is about two million and the average age is well over sixty. It seems that younger men are no longer attracted to an organization whose members receive such grandiose titles as Master of the Royal Secret, Knight of the Brazen Serpent, or Worshipful Master. As for being a secret society, the telephone numbers of Masonic lodges are in the directory and many of their oaths have been made public—for example: “You agree to be a good man and true; you agree to conform to the laws of the country in which you reside; you promise not to be concerned in plots and conspiracies against the government.” Each year the Masons give millions of dollars to charities.

In 2005, as a wit has observed, the Masons are Laurel and Hardy heading for the Sons of the Desert convention to get away from their wives and party up; the secret rituals are Ralph Kramden and Ed Norton shaking their tails at the Raccoon Lodge; the reenactments of ancient traditions are Amos and Andy at the Mystic Knights of the Sea; the secret handgrips are Fred Flintstone greeting Barney Rubble with the secret word of the Water Buffalo, ak-ak-a-dak.

But there are those conspiracy buffs who see beyond the innocuous public image of the Freemasons and discern their true identity as a powerful secret brotherhood of darkness that is planning to take over the world. According to some scholars of the occult, the Masons’ “Supreme Architect of the Universe” is none other than Lucifer, who cloaks himself in Masonic literature as Zoroaster, Shiva, Abaddon, and other pagan-god disguises. The so-called holy writings of Freemasonry, as well as their secret rites, passwords, initiations, and handshakes, have their origins in the Roman mystery religions, Egyptian rituals, and Babylonian paganism. Often linked to the Illuminati, Freemasonry is said to have exerted its influence on every aspect of American society—including its currency.

On the front of a one-dollar bill there is a portrait of George Washington, an avowed Mason, who donned his Masonic apron and presided over the dedication of the U.S. Capitol. The flip side of the bill displays both faces of the Great Seal of the United States. The front of the seal depicts the spread eagle, arrows in one claw, olive branch in the other, and a banner proclaiming E Pluribus Unum (“Out of many, one”) in its beak. On the seal’s other side is an incomplete pyramid with an eye floating in a glowing triangle where the capstone should be. Above the eye is the caption Annuit Coeptis, commonly translated as “He has favored our undertaking,” and in a scroll beneath is the slogan Novus Ordo Seclorum, “New Order of the Ages.” Historians of the Masonic order state that the establishment of such a “new order” is an integral part of the ancient plan of the Freemasons, the Illuminati, and other nefarious groups to control the world. Former president George H. W. Bush’s Masonic connections influenced his decisions in the Oval Office. Russia’s premier Mikhail Gorbachev is a secret Mason who worked with Bush to institute a New World Order.

Most scholars agree that the pyramid represented on the bill is the Great Pyramid of Cheops at Giza, which, to a Mason, is emblematic of the continuity of the craft of Freemasonry from the dawn of civilization in Egypt. It is also a reminder of the legend that Egyptian civilization was founded by survivors from Atlantis and that the United States is the New Atlantis foretold by the great master Mason Sir Francis Bacon. The pyramid with the all-seeing eye represents the Great Architect of the Universe guiding the Founding Fathers of the United States to establish a nation that might one day reveal itself as the heir of the ancient mysteries of Atlantis and restore all humankind to the earthly paradise that existed in that Golden Age of old.

The central mythos of Freemasonry centers on the building of the great temple of King Solomon and Solomon’s securing the services of the most accomplished architect in the world, Hiram Abiff, who designed the magnificent temple according to the precepts of the Great Architect of the Universe. Although Hiram is mentioned in biblical accounts as a master of the arts of construction, the rites of Freemasonry extend beyond the Bible and fashion a parallel myth, portraying Hiram as a primary figure in the creation of the temple. According to Masonic tradition, the ancient builders of Solomon’s temple created the rites still practiced in modern lodges, with the various degrees of initiation and their secret symbols and handshakes.

While the Free and Accepted Order of Freemasons may claim to be the oldest fraternity in the world, historically it does not date back to the masons working on Solomon’s temple—nor does it date, as some Masons vow, to those who labored on the Egyptian pyramids. Freemasonry evolved from the guilds of stonemasons who traveled from city to city in Europe in the fourteenth century looking for work on the great cathedrals being constructed at that time. The secret passwords and handshakes were unique ways by which a newcomer to a city might prove that he was a true member of the guild. Although there are references to Freemasonry as early as 1390, the structured fraternity as such did not come into being until 1717 when four London lodges united.

The Freemasons were nondenominational, asking only that members recognize a Supreme Being and seek somehow to better humanity through the course of their own lives. Because men of low rank could join and no religious philosophy was deemed superior to another, the lodges of Freemasonry became champions of the emerging concepts of democracy that were suffusing the Enlightenment. Such freedoms of thought and spirituality did not endear the organization to certain facets of established society, particularly the Roman Catholic Church, who condemned the fraternity as anti-Christian.

By the mid-1700s Freemasonry had established its lodges throughout Europe and had been carried across the ocean to the New World by numerous immigrants. George Washington, Benjamin Franklin, John Hancock, Paul Revere, and many other of the Founding Fathers of the United States were Masons. A freed slave, Prince Hall, who was initiated into Masonry by a British soldier in Boston, later founded an African lodge, which became the still-extant Prince Hall Masons.

After the Revolution, Freemasonry became extremely powerful in the United States. Lodges sprang up in the smallest of villages, and it became an undeniable sign of prestige in any community to be a member. For businessmen who wished to succeed, it was almost a requirement to join the Freemasons.

It was the tragic death of one of its members in 1826 that led to the near-annihilation of the Masons in the United States. William Morgan, a disillusioned Mason from Batavia, New York, let it be known that he was writing a book that would reveal all the secrets of Freemasonry to the world. The printer’s shop that was going to publish his manuscript was torched, and a few days later Morgan was arrested on trumped-up charges that he was in arrears on a two-dollar debt. That night, a stranger arrived to pay Morgan’s bail, and the dissident Mason was then seized by a group of his fellow lodge members and forced into a carriage. Neither Morgan nor his remains were ever found.

One of the cornerstones of Masonry is loyalty to its members, but the entire nation was offended by the manner in which juries were stacked in favor of the Masons accused of having murdered William Morgan. The general population was shocked by the power of a secret society that could stonewall three special prosecutors. After twenty trials for murder and kidnapping, the local sheriff, who was a Mason and obviously an integral element in Morgan’s abduction and disappearance, received the most severe judgment of all the defendants when he was sentenced to thirty months in jail.

Anti-Mason sentiment swelled throughout the country, and an Anti-Mason Party was founded that elected governors in Pennsylvania and Vermont and won seven electoral votes in the 1832 election. It was no longer prestigious to be a Mason. In state after state, lodges closed. Overall, the fraternity lost more than half its members.

By 1845 Freemasonry began to revive in the United States, but it never again achieved the social status it had once enjoyed. In 1872 two Masons formed a kind of parody of the Masons and named it the Ancient Arabic Order of the Nobles of the Mystic Shrine, a.k.a. the Shriners. By 1897 the Masons had about 750,000 members and societal pressures had lifted as numerous other fraternal organizations, such as the Knights of Columbus, the Benevolent and Protective Order of Elks, the Odd Fellows, and the Loyal Order of Moose sprang into being. In the 1950s the Masons reached their numerical peak in America with more than 4 million members. Depending upon the prejudices of the beholder, the Freemasons remain a fraternal group that donates generously to charities—or an insidious secret society bent on world conquest.