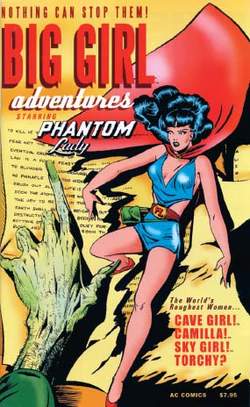 The Freedom Fighters are a patriotically-themed team of superheroes, whose members were originally owned by Quality Comics in the 1940s and were subsequently acquired by DC Comics. When the team first appeared in comics, its members were Uncle Sam, the Black Condor, Doll Man, the Human Bomb, Phantom Lady, and the Ray.

Their leader is Uncle Sam, who appropriately debuted in National Comics #1 (July 1940), and was created by writer/artist Will Eisner, based on the iconic American figure best known through the portrait by James Montgomery Flagg. Eisner’s version was a Revolutionary War soldier named Sam, who continues to manifest himself in physical form as the embodiment of the spirit of American freedom.

Also created by Eisner, Darrell Dane, alias Doll Man, was the first superhero who could shrink in size, debuting in Feature Comics #27 (December 1939). He concocted a formula that allowed him to shrink to six inches in height while retaining his full strength, like DC’s later hero, the Atom.

Roy Lincoln, the Human Bomb, drank a chemical that enabled him to cause powerful explosions with his touch. As a result he had to wear a protective gloves. Created by writer/artist Paul Gustavson, he first appeared in Police Comics #1 (August 1941).

Also making her debut in Police Comics #1 was the Phantom Lady, one of the first superheroines, who was first drawn by Arthur Peddy at the Eisner-Iger studio. She was Sandra Knight, the daughter of a United States Senator, who in her costumed identity utilized a “black light” projector, with which she could make herself invisible. After her run at Quality, Fox Feature Syndicate published new Phantom Lady comics, which became notorious because of the daringly revealing costume that “good girl artist” Matt Baker gave the character. Other lesser comics companies published Phantom Lady stories until DC asserted ownership of the character.

Reporter “Happy” Terrill traveled in a balloon through an electrical storm, gaining the powers to absorb and project light and to fly, and became the costumed hero known as the Ray. Created by Eisner and Fine, the Ray debuted in Smash Comics #14 (September 1940).

Other Quality heroes who were later part of the Freedom Fighters included Firebrand (Rod Reilly, from Police Comics #1), Miss America (Joan Dale, who can transmute matter, from Military Comics, August 1941), Alias the Spider (Thomas Hallaway, an archer, from Crack Comics #1), the Jester (Chuck Lane, from Smash Comics #22, May 1941), Manhunter (Dan Richards, from Police Comics #8, March 1942, not to be confused with DC’s Simon & Kirby version), and Quicksilver (now known as Max Mercury, a super-speedster from National Comics #5, November 1940). Quality’s Miss America and Quicksilver are different from the Marvel heroes of the same names.

Over the decades DC has introduced new versions of various members of the Freedom Fighters. For example, writer Roy Thomas co-created a female Firebrand in All-Star Squadron, and Ray Terrill, son of Happy, starred in his own The Ray comic book (1994–1996).

The 2006 miniseries, Uncle Sam and the Freedom Fighters, featured new versions of Doll Man, Human Bomb, Phantom Lady, and the Ray, led by the original Uncle Sam. A new, continuing Freedom Fighters series, featuring this new team, was launched in 2010.

The original line-up of Freedom Fighters made their television debut when they teamed up with Batman and Plastic Man in a 2010 episode of the animated series Batman: The Brave and the Bold. —PS

Feedback
Flashcards & Bookmarks ?
Please log in or register to use Flashcards and Bookmarks. You can also log in with
Flashcards ?
My bookmarks ?
+ Add current page to bookmarks
Mentioned in ?
References in periodicals archive ?
Reacting, PDP stated that Kanu is not a freedom fighter but a businessman out to make money from Igbo politicians and businessmen.
Biafra: PDP attacks Nnamdi Kanu
"He will remain a freedom fighter whose portrait adorns the Parliament.
ABVP to organise debates on forgotten freedom fighters on every educational campus
A few individuals who tried to research on the Mau Mau like Maina Wa Kinyatii were jailed," says Kimani Waweru, the in-charge at Ukombozi Library, which is collaborating with the Mau Mau Research Centre in a new effort to tell the freedom fighters' story.
The unsung Mau Mau heroes who fought for independence
LAHORE -- The Bhagat Singh Memorial Foundation held a candlelit vigil in connection with the 88th death anniversary of freedom fighter Bhagat Singh at Shadman Chowk here on Saturday.
Bhagat Singh death anniversary marked
Freedom fighters who migrated to these regions after the March 1 Independence Movement teamed up with local Korean groups and launched an armed resistance against Japan.
Freedom fighters gone to China, Russia, US
According to the Kashmiri police, of the 250 known freedom fighters, only 50 or so are from Pakistan.
Indian fear of Taliban returning to power
Wanjugu said some administrative and political leaders have labelled the programme a scam, dampening the spirit of the freedom fighters who she said have been waiting for the government to assist them in vain.
Dedan Kimathi's daughter denies conning Mau Mau veterans through 'free land issuance'
Bullets can never suppress unarmed brave Freedom Fighters. Indian Army must respect ethics of professional soldiering,' the DG ISPR wrote.
DG ISPR condemns state-sponsored terror in IOK
ISLAMABAD -- Federal Information Minister Fawad Chaudhry said on Monday that postal stamp of Burhan Wani reflects the view that Pakistan considers him a freedom fighter.
Pakistan considers Burhan Wani 'freedom fighter': information minister
On the other hand, Malaysian freedom fighters won independence for the country from the British colonists without the use of force.
Mat Sabu: Know the difference between freedom fighters and communist movement
The artists at cultural show paid tribute to freedom fighters of Kashmir by presenting Kashmiri popular folk music and songs.
PNCA organizes special cultural programs to mark Kashmir Solidarity Day
The official said letters written by Singh from jail to his father besides books, newspapers, records of the hotels where he and other freedom fighters stayed when underground are also to be included in the exhibition.
Pakistan to hold exhibition of Bhagat Singh trial records