[frā′nel ′mir·ərz]
(optics)
Two plane mirrors which are inclined to each other on the order of a degree and used to observe the interference of light which originates from a slit and is reflected from both mirrors.
McGraw-Hill Dictionary of Scientific & Technical Terms, 6E, Copyright © 2003 by The McGraw-Hill Companies, Inc.
The following article is from The Great Soviet Encyclopedia (1979). It might be outdated or ideologically biased.

(also Fresnel bimirror), two plane mirrors that form a dihedral angle a few angular minutes less than 180° used for the observation of the phenomenon of the interference of coherent light beams; proposed by A. J. Fresnel in 1816. 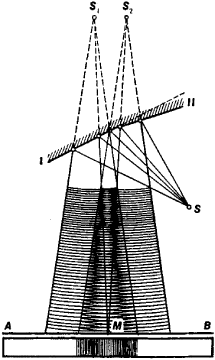 When the mirrors I and II (see Figure 1) are illuminated by a source S, the beams of rays reflected from them may be considered to have originated from coherent sources S1, and S2, which are virtual images of S. Interference occurs in the region where the beams cross. If S is linear (a slit) and parallel to the edge of the Fresnel mirrors, then upon illumination by monochromatic light the interference picture in the form of parallel slits of evenly spaced dark and light bands or fringes is observed on the screen M, which can be set up anywhere in the region where the beams cross. The wavelength of the light can be determined from the distance between the bands. Experiments conducted with Fresnel mirrors were one of the crucial proofs of the wave nature of light.

Feedback
Flashcards & Bookmarks ?
Please log in or register to use Flashcards and Bookmarks. You can also log in with
Flashcards ?
My bookmarks ?
+ Add current page to bookmarks
Mentioned in ?
References in periodicals archive ?
Large fields of Fresnel mirrors would reflect sunlight onto pipes containing water, heating it to make steam.
The sunshine solution: what does it take to power the country? If the physicist and engineers behind a start-up manufacturer are right, all we need is blue skies and big mirrors