[frā′nel ′lenz]
(optics)
A thin lens constructed with stepped setbacks so as to have the optical properties of a much thicker lens.
McGraw-Hill Dictionary of Scientific & Technical Terms, 6E, Copyright © 2003 by The McGraw-Hill Companies, Inc.
The following article is from The Great Soviet Encyclopedia (1979). It might be outdated or ideologically biased.

a complex compound lens used in lighthouse and signal beacons. It was proposed by A. J. Fresnel. The lens does not consist of a single polished piece of glass with spherical or other surfaces like conventional lenses but instead is made of a 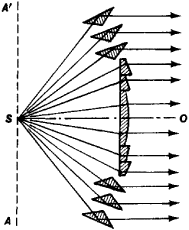 Figure 1. Cross section of ring-type Fresnel lens. In the center are rings whose outer surfaces are parts of toroidal surfaces. Along the edges of the lens are rings in which full internal reflection occurs in addition to refraction.

succession of individual, thin concentric rings, which in cross section have the shape of a special type of prism (see Figure 1). Such a design gives the Fresnel lens very low thickness, and therefore also very low mass, even for a large coverage angle. The sections of the rings are such that the spherical aberration of the Fresnel lens is slight and beams of light from point source S placed in the focus of the lens emerge, after refraction in the rings, in a practically parallel beam (in ring-type Fresnel lenses).

Fresnellens
In lighting, a lens that concentrates light from a small source such as an incandescent filament; similar to but thinner and lighter than a plano-convex lens owing to steps on the convex side; used in many types of luminaires, esp. downlights and spotlights.
McGraw-Hill Dictionary of Architecture and Construction. Copyright © 2003 by McGraw-Hill Companies, Inc.