in architecture, the member of an entablature between the architrave and the cornice or any horizontal band used for decorative purposes. In the first type the Doric frieze alternates the metope and the triglyph; that of the other orders is plain or sculptured. The 5th-century B.C. treasury of the Cnidians at Delphi shows figures in the frieze. Roman and Renaissance examples, a notable one being on the 1st-century B.C. temple of Vesta at Tivoli, display acanthus leaves and other ornamentation.
The Columbia Electronic Encyclopedia™ Copyright © 2013, Columbia University Press. Licensed from Columbia University Press. All rights reserved. www.cc.columbia.edu/cu/cup/

An elevated horizontal continuous band or panel that is usually located below the cornice, and often decorated with sculpture in low relief.

[frēz]
(architecture)
A decorated band immediately below the cornice on an interior wall.
(textiles)
Thick, heavyweight coating and upholstery fabric, with a rough, raised fibrous surface and a more or less hard feel.
McGraw-Hill Dictionary of Scientific & Technical Terms, 6E, Copyright © 2003 by The McGraw-Hill Companies, Inc. 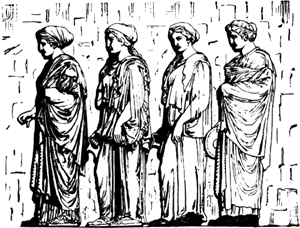 from the frieze, 2 of the Parthenon 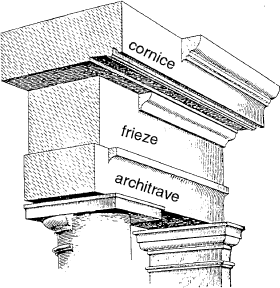 frieze, 1
1. In Classical architecture and derivatives, the middle horizontal member of three main divisions of an entablature, above the architrave and below the cornice.
2. A decorative band at or near the top of an interior wall below the cornice.
3. In house construction, a horizontal member connecting the top row of the siding with the underside of the cornice. Also see cushion frieze.
McGraw-Hill Dictionary of Architecture and Construction. Copyright © 2003 by McGraw-Hill Companies, Inc.

Feedback
Flashcards & Bookmarks ?
Please log in or register to use Flashcards and Bookmarks. You can also log in with
Flashcards ?
My bookmarks ?
+ Add current page to bookmarks
Mentioned in ?
References in periodicals archive ?
Other friezes for sale this year include a 13ft frieze of Elvis which will take pride of place on the front of Sinatra's Takeaway and a 25ft Mansel's Chippy banner.
In praise of The King; Elvis fans will be in South Wales this weekend Porthcawl Elvis Festival. Here's our guide to celebration of the American music legend
If you're heading to the festival chances are you'll easily spot the 140ft frieze featuring The King So, what exactly can I expect from David has been raising funds for of Sinatra's Takeaway and a 25ft Mansel's Chippy banner.
Shaking up the seaside
Saariaho acknowledges that her landscapes, especially "Pavage," are inspired by the art of MC Escher and the painted friezes of Odilon Redon, which she recently saw in an exhibition.
Art and music meet on the wall
In creating the friezes, gods or warriors are two options of what can be created.
My temple with a frieze: learning from the Greeks and Romans
PROUD The Queen at the unveiling; TRIBUTE Prince William and Harry; GRANTASTIC Frieze shows her visiting Londoners during the Blitz and enjoying a day's racing; REUNION Monument includes two statues; DEVOTED Queen Mum and George VI and, above, yesterday's ceremony on Mall
TOGETHER FOR EVER; Queen Mum statue next to husband
A glass hall at the top of the two-story museum - with a wall of windows allowing visitors to look directly onto the 2,400-year-old Acropolis - will house the parts of the Parthenon frieze still in Athens.
Museum could bring back Elgin Marbles
The stone has been used to build three semi-circular parapets, featuring sculptured friezes by landscape artist Howard Bowcott in the walling and columns.
Stonework success
Nursery and toddler classes near the Leam Lane Sure Start centre in Gateshead, were given art materials to create a series of wall friezes depicting the Easter scene.
Easter is brought to life
Part of what set Wesley apart within early Pop was the breadth of his bricolage--he rhymed the serial imagery of ancient friezes and pottery with contemporary wallpaper patterns.
John Wesley: Fredericks Freiser Gallery
Stylistically, the Ara Pacis friezes represent the period of greatest influence of Greek sculpture on Roman art.
Forum Romanum
Two groups of incised narrative friezes encircle the vessel, and above and below are ornamental designs.
Ein vergoldeter Silberbecher der Zeit Assurbanipals im Miho Museum: Historische Darstellungen des 7. Jahrhunderts v. Chr
"We're selling more textured friezes and single-color patterns created with precision-cut and uncut pile.
PILES OF STYLES FUELING COMEBACK IN CARPETS