[′frin·jəz əv ¦ē·kwəl ′thik·nəs]
(optics)
Fizeau fringes
McGraw-Hill Dictionary of Scientific & Technical Terms, 6E, Copyright © 2003 by The McGraw-Hill Companies, Inc.
The following article is from The Great Soviet Encyclopedia (1979). It might be outdated or ideologically biased.

one of the effects of the optics of thin films. In constrast to fringes of equal inclination, they are observed directly on the surface of a transparent film of varying thickness (Figure 1). 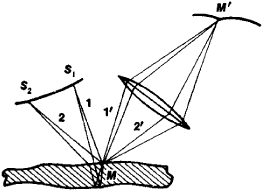 Figure 1. The path difference of interfering rays reflected from the upper and lower boundaries of a thin film depends on the angles of incidence of the illuminating rays. Even in the case of extended light sources, however, the spread of these angles is so small that the path difference acquired at point M of the film by rays 1–1′ and 2–2′, which are emitted by different parts (S1 and S2) of the source, are practically the same. The fringes of equal thickness are therefore localized directly on the surface of the film and can be observed without auxiliary optical instruments—the lens in the figure could be the crystalline lens of the eye. M’ is the point on the retina (or, when a supplementary lens is used, on the screen) where the image of the point M of the surface of the film—that is, one of the points on a line of equal thickness—is focused.

Fringes of equal thickness are responsible for the rainbow coloring of thin films, such as soap bubbles, patches of oil and gasoline on water, and films of oxides on metals; they are the cause of temper color. Such fringes are often used for determining the microrelief of thin plates and films and for making precise measurements with different kinds of interferometers and other instruments. Newton’s rings are an example of fringes of equal thickness.