a special-effects method of motion-picture photography in which the images of actors and objects located in the foreground are superposed in the frame on the image of a background produced by a motion-picture or slide projector on a light-reflecting screen. In the simplest case (Figure 1, a), the motion-picture or slide projector and the motion-picture camera are positioned in front of the reflecting screen at a specified distance from each other, so that the optical axes of their objective lenses are directed toward the center of the screen. In order to avoid spurious shadows on the screen, the area in which the objects being photographed are positioned and moved around is restricted to the portion of the space not covered by the beam from the projector’s lens but within the field of view of the camera.

In front projection in which the projector and camera lenses are brought into optical coincidence (Figure 1, b), the drawback mentioned above is eliminated. The projector and camera are mounted on a common support in such a way that their optical axes are in a single plane (horizontal or vertical) at an angle of 90° and intersecting at a point equidistant from both lenses. A beam splitter or a mirror with a hole in it is placed at the point of intersection at an angle of 45° to the direction of the light flux from the projector. At the same point the optical axis of the camera and 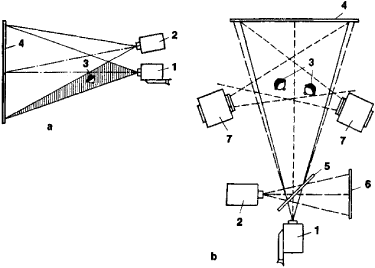 the axis of the light flux reflected from the mirror will coincide; thus, both lenses view the objects being photographed as if from a single point, and the shadows on the screen do not fall within the field of view of the camera.

When a motion-picture projector is used to produce the background image, its operation is synchronized with the operation of the camera so that the camera shutter is open when the projector shutter is open. Front projection can also be carried out in a frame-by-frame mode and in combination with other special-effects techniques. Modern arrangements for this method include raster screens that have a narrowly directed reflection, which substantially reduces light losses.

Front projection has all the merits of rear projection as well as a number of additional advantages: the studio area required during photographing can be from two to three times smaller, the intensity of the light flux from the projector is reduced by a factor of 10–20, and the screen receives more uniform illumination.

Feedback
Flashcards & Bookmarks ?
Please log in or register to use Flashcards and Bookmarks. You can also log in with
Flashcards ?
My bookmarks ?
+ Add current page to bookmarks
Mentioned in ?
References in periodicals archive ?
During this operation, front projection, front beam columns, eight (8) rooms at ground floor, reception office at ground floor, eight (08) rooms at first floor, hall at 2nd floor, stairs at Southern side and pillars of Aman Medical Institute were demolished.
Drive against encroachments in full swing
By display technology, the market is bifurcated into LCD, PDP, OLED, LED, front projection, and rear projection.
Global Digital Signage Market Projected to Touch US$34.67 Bn by 2022
Demolition of existing garages, erection of two storey side extension, including front projection incorporating porch, and erection of one and a half storey detached garage.
Planning applications
The company is a leading manufacturer and distributor of broadcast and professional video equipment, as well as D-ILA front projection systems.
JVC Announces Partnership with Peplink
Two variations of the technique emerged: rear projection and front projection. Both techniques attempted to avoid projecting the image directly onto the actor, who was positioned in front of the screen.
Practical effects for the digital world
Based on Technology, market is segmented into LCD, LED and Front Projection. Based on Type, market is segregated into Hardware, Software and services.
Stratistics MRC Announces Its New Report, "Digital Signature Technology Global Market Outlook - Trends, Forecast, and Opportunity Assessment"
The visual system manufactured by RSI will offer a front projection 200-degree horizontal by 40-degree vertical field of view and image display from three-channel PC-based image generators and three LED projectors.
TRU Simulation + Training to provide flight simulator for flight academy
Released in December 1968, Where Eagles Dare was one of the first films to use front projection effect (now evolved into blue/green screen technology) enabling filming of exciting scenes when actors fought on top of a cable car.
How Burton's film Where Eagles Dare funds a prestigious playwriting prize; STAR'S 'NICE LITTLE EARNER' HAS EARNED $8M IN ROYALTIES
"Creating a chipset that makes 3D and interactive technologies more accessible for projector developers is a major step forward for the industry," said Roger Carver, General Manager, DLP Front Projection. "This helps our customers build off-the-shelf projectors while adding new capabilities at a comparable price point that allows for global deployment while still serving unique regional needs."
Texas Instruments DLP Technology Releases New Chipset
The Tensioned Conference Electrol is available in sizes up to 10 feet wide with any of Da-Lite's flexible front projection surfaces.
Screen concealer
JVC is a leading manufacturer and distributor of broadcast and professional video and audio equipment, security products including IP network cameras and recorders, premium front projection systems for home theater use, and projection displays and optics used in aviation simulators.
JVC Unveils First Handheld 4K Camcorder GY-HMQ10