[′tōd·əl in′tərn·əl ri′flek·shən]
(optics)
A phenomenon in which electromagnetic radiation in a given medium which is incident on the boundary with a less-dense medium (one having a lower index of refraction) at an angle less than the critical angle is completely reflected from the boundary.
McGraw-Hill Dictionary of Scientific & Technical Terms, 6E, Copyright © 2003 by The McGraw-Hill Companies, Inc.
The following article is from The Great Soviet Encyclopedia (1979). It might be outdated or ideologically biased. 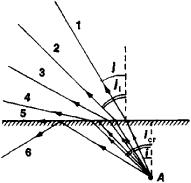 Figure 1. Illustration of total internal reflection: (A) light source. Total internal reflection (ray 6) occurs when the angles of incidence of light on the surface of the optically less dense medium exceed the critical angle icr for which the angle of refraction i is 90° (ray 5). The refractive index of the lower medium is greater than that of the upper medium.

Total internal reflection was first described by J. Kepler. After the discovery of Snell’s law of refraction, it became clear that within the framework of geometrical optics total internal reflection follows directly from this law, since the angle of refraction j cannot exceed 90° (Figure 1). The quantity icr is given by the condition sin icr = 1/n, where n is the relative refractive index of the first and second media. Because of dispersion, the values of n and, consequently, of icr differ somewhat for different wavelengths (frequencies) of radiation.

Figure 2. Total-reflecting prisms: (a) deviating prism, (b) reversing prism; the arrows on the lines representing light rays indicate the direction of the rays

of total internal reflection in many optical instruments and experiments (see Figures 2 and 3). It should be noted, however, that the energy of electromagnetic waves during total internal reflection partially penetrates into the second medium (the medium with the lower refractive index) but then returns. The depth of this penetration is extremely slight and is of the order of the wavelength of the reflected light.

Light that is reflected back from the edge of the medium it is traveling through. When light rays travel at an angle greater than the "critical" angle, which is determined by the medium, the light reflects back into the medium. When they are less than the critical angle (more perpendicular), the light is refracted out of the medium and lost to the outside. See refractive index.
Copyright © 1981-2019 by The Computer Language Company Inc. All Rights reserved. THIS DEFINITION IS FOR PERSONAL USE ONLY. All other reproduction is strictly prohibited without permission from the publisher.