fuel cell, electric cell in which the chemical energy from the oxidation of a gas fuel is converted directly to electrical energy in a continuous process (see oxidation and reduction). The efficiency of conversion from chemical to electrical energy in a fuel cell is between 65% and 80%, nearly twice that of the usual indirect method of conversion in which fuels are used to heat steam to turn a turbine connected to an electric generator. The earliest fuel cell, in which hydrogen and oxygen were combined to form water, was constructed in 1829 by the Englishman William Grove.

In the hydrogen and oxygen fuel cell, hydrogen and oxygen gas are bubbled into separate compartments connected by a porous disk through which an electrolyte such as aqueous potassium hydroxide (KOH) can move. Inert graphite electrodes, mixed with a catalyst such as platinum, are dipped into each compartment. When the two electrodes are connected by a wire, the combination of electrodes, wire, and electrolyte form a complete circuit, and an oxidation-reduction reaction takes place in the cell: hydrogen gas is oxidized to form water at the anode, or hydrogen electrode; electrons are liberated in this process and flow through the wire to the cathode, or oxygen electrode; and at the cathode the electrons combine with the oxygen gas and reduce it. The modern hydrogen-oxygen cell, operating at about 250℃ and a pressure of 50 atmospheres, gives a maximum voltage of about 1 volt.

A number of other fuel-cell technologies have been developed, but the fundamental design—anode catalyst, electrolyte, and cathode catalyst— remains the same; hydrogen is the most commonly used fuel, but other fuels, such as natural gas, are used. Fuel cells are combined in a fuel-cell stack to create greater voltages or currents. Characterized by high efficiency, cleanliness, and lack of noise, fuel cells have been used to generate electricity in space flights, to produce electricity in remote locations or from landfill or waste treatement gases, and, more recently, to power automobiles.

An electrochemical device in which hydrogen is combined with oxygen to produce electricity with heat and water vapor as by-products. Natural gas is often used as the source of hydrogen, and air as the source of oxygen. Since electricity is produced by a chemical reaction and not by combustion, fuel cells are considered to be green power producers. Fuel cell technology is quite old, dating back to the early days of the space program. Commercial use of fuel cells has been sporadic; however, the use of fuel cells in buildings is expected to increase in the next decade.
Illustrated Dictionary of Architecture Copyright © 2012, 2002, 1998 by The McGraw-Hill Companies, Inc. All rights reserved
The following article is from The Great Soviet Encyclopedia (1979). It might be outdated or ideologically biased.

the most important component of an electrochemical generator, which directly converts the chemical energy of fuel and oxidant reactants into electricity.

At the heart of a fuel cell are two electrodes separated by a solid or liquid electrolyte (see Figure 1). The fuel and oxidant are introduced into chambers adjacent to the electrodes, and oxidation and reduction reactions occur on the electrolyte-electrode interface in the presence of a catalyst (seeOXIDATION-REDUCTION REACTION). As a result of these reactions, ions A~ and B+ are formed, which later recombine to yield the final reaction product AB, and heat Q is released or absorbed. The electrons liberated by the oxidation of the fuel create an excess negative charge on the corresponding electrode (anode), and an excess positive charge is produced on the cathode as a result of the reduction of the oxidant. When the external circuit is closed, an electric current appears, which performs useful work Euse. The overall reaction is A + B = AB + Q + Euse. 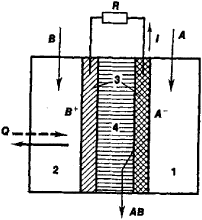 Figure 1. Diagram of a fuel cell: (1) and (2) chambers with reactants, (3) electrodes, (4) electrolyte, (A) oxidant, (B) fuel, (AB) reaction products, (R) load resistance, (I) electric current, (Q) heat released or absorbed as a result of the reaction

ionization processes and of the conduction of electrons and reaction products, and high purity of the reactants.

The idea of constructing a fuel cell was put forward in the early 19th century by the English physicist W. R. Grove, but it was only in the 1960’s that practical fuel cells were constructed— almost simultaneously in the USSR, USA, France, and Great Britain. By the mid-1970’s, many different types of fuel cells had been developed, differing in operating temperature (from room temperature to 1200°K), type of fuel (hydrogen, hydrogen-bearing substances, and metals), oxidant (oxygen, oxygen-bearing substances, and chlorine), catalyst (platinum, palladium, silver, nickel, and carbon), and electrolyte (alkalies or acids, solid metal oxides, salt melts, and ion-exchange polymers).

Fuel cells in which hydrogen, oxygen, and an alkali (or ion-exchange polymer) are used as fuel, oxidant, and electrolyte, respectively, have proved the most practical. Such fuel cells operate at moderate temperatures (up to 100°C), which ensures a long operating life—up to several thousand hours; their operating voltage is approximately 1 volt. In principle, however, any substance that reacts at the operating temperature with oxygen or halogens may serve as the fuel in a fuel cell. Fuel cells using the direct oxidation of hydrocarbons (propane or gasoline), alcohols, and ammonia also show promise for future development.

One of the major problems hindering the development of fuel cells is the need to develop a theory of catalysis and to devise practical methods for the production of catalysts with sufficient activity, corrosion resistance, and resistance to the poisoning effect of reaction products. (See alsoGROVE CELL.)

[′fyül ‚sel]
(physical chemistry)
An electrochemical device in which the reaction between a fuel, such as hydrogen, and an oxidant, such as oxygen or air, converts the chemical energy of the fuel directly into electrical energy without combustion.
McGraw-Hill Dictionary of Scientific & Technical Terms, 6E, Copyright © 2003 by The McGraw-Hill Companies, Inc.

a cell in which the energy produced by oxidation of a fuel is converted directly into electrical energy
Collins Discovery Encyclopedia, 1st edition © HarperCollins Publishers 2005

A pollution-free electricity generation technology for electric vehicles. Road testing began at the end of the 20th century, and hydrogen-powered fuel-cell buses have been running since the mid-2000s. Japan has been selling its Mirai fuel-cell automobile since 2014, and Japan along with China and South Korea have all set long-range targets for fuel-cell vehicles (FCVs).

From a refueling standpoint, a fuel-cell vehicle is like a car at a gas station rather than an electric vehicle (EV) that plugs into a charger. A fuel cell takes in hydrogen-rich fuel and air (oxygen) and turns them into electricity for the electric motors. The waste product is water, and although not recommended for drinking, one test by Toyota showed fewer organic impurities than a glass of milk.

The Energy Alternative?
Fuel cells compete with lithium-ion batteries as the source of electricity for the electric motors in the vehicle, and there are challenges. While hydrogen can be derived from natural gas, propane, methane or water, it depends on which sources ultimately make the most sense. In addition, hydrogen is difficult to distribute and stockpile, and installing hydrogen pumps in every gas station is a gigantic undertaking. See lithium ion.

Heat and Power the Home
Fuel cells are also expected to provide a pollution-free source of energy for electricity and heat in the home. This combined usage is a major incentive for fuel cell research and development.