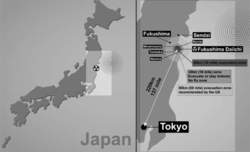 This diagram shows the location of the damaged Fukushima nuclear plant and the extent of the evacuation zone.

People were shocked all over the world when a huge 9.0 earthquake struck Japan, resulting in a devastating tidal wave that hit the eastern coast, wiping out entire towns. Worst of all was the damage to the Fukushima Daiichi nuclear power plant, which caused a radiation leak that forced the evacuation of nearly a quarter million people.

On Friday, March 11, 2011, the world watched in horror as a 9.0-magnitude undersea earthquake struck the northeast coast approximately 81 miles east of Japan’s Oshika Peninsula of Tohoku near Sendai just minutes before 3:00 P.M. (local time). With its epicenter about 20 miles under the earth’s surface, within a few minutes the quake had triggered 33-foot high waves. Entire towns and villages were swept away by the massive tsunami, and fears immediately arose concerning the power supply and cooling systems at Tokyo Electric’s (TEPCO) reactors at the Fukushima Daiichi nuclear power plant.

Initial reports attempted to assuage global concerns by stating that damage was minimal and there was no cause for alarm. However, by Sunday the government disclosed that 230,000 people had been evacuated from the area near the nuclear reactors. The power plant had suffered damage from the tsunami, and, on Saturday, an explosion had occurred in a building that housed one of the reactors. Prime Minister Naoto Kan admitted to the world that Japan now faced its greatest crisis since World War II. Millions of residents were without power or water.

During the decades after World War II, as people in the United States and Europe had become more familiar with Japan and its thriving global economy, it had seemed that earthquakes were commonplace; rumbles occurred so frequently that the citizenry had become inured to feeling the earth move under their feet. However, the 9.0-magnitude quake on March 11 was the most powerful ever recorded in Japan.

On Monday, March 14, a second explosion occurred at the damaged Fukushima plant, where courageous employees attempted to make the surrounding area safer by doing what they could to repair the damage. On March 15, when two more explosions and a fire shook the Fukushima plant, the radiation levels rose to such dangerous levels that authorities strongly recommend that people who lived as far away as twenty miles from the reactor stay indoors.

On March 17, a radioactive plume entered western North America and was moving toward the North Atlantic, where it was detected on monitoring sites. In Japan, the U.S. State Department recommended the voluntary departure of the families of the U.S. embassy staff. Other nations quickly followed suit and began to bring home the families of their embassy workers.

The core of the Number Three reactor was found to be damaged, and on March 18, the Japanese nuclear safety agency elevated the Fukushima radiation danger from 4 to 5 on the international 0 to 7 scale of gravity.

By Saturday, March 19, abnormal levels of radiation were detected in dairy and garden products in the Fukushima area, and traces of radioactive iodine were found in tap water in Tokyo, 155 miles away from the damaged nuclear plant. By March 21, abnormal radiation levels were detected in food products in four prefectures. In a few more days, tap water in Tokyo yielded high readings of radiation levels, and officials warned that the levels were not safe for babies.

The London Guardian opined that Japan appeared to have lost the fight to save the nuclear reactor: “The radioactive core in a reactor at the crippled Fukushima nuclear power plant appears to have melted through the bottom of its containment vessel … raising fears of a major release of radiation at the site.” (Ian Sample, March 29, 2011).

By the end of March, the area of Fukushima went on maximum alert after high traces of plutonium were discovered in the soil. At least nineteen selfless workers at the site were exposed to high levels of radiation.

An estimated total of 28,000 dead or missing was attributed to the tsunami, and about 25,000 Japanese and U.S. soldiers were deployed to the northeast coast of Japan to search for victims of the disaster. The nation of Japan soon announced the beginning of an official rehabilitation and reconstruction phase.

International experts began speaking of Fukushima as being worse than the nuclear disaster in Chernobyl, which rocked the Ukraine in 1986 and is still contaminated today. They predicted radiation releases that would spread catastrophically across wide parts of Japan and the entire Northern Hemisphere. Some areas would be permanently contaminated, and millions of people could perish from deadly cancers.

By the close of 2011, radiation levels had reached fifty million times the normal levels in the ocean water off the coast of the Fukushima Daiichi facility. The alternative press was detailing such information and proclaiming the event as the worst radiological accident in the history of nuclear research, while the mainstream media largely reported that the radiation at Fukushima had been contained. TEPCO, according to whistleblowers, had repeatedly and deliberately lied to the public. In December 2011, TEPCO admitted that alarming quantities of radioactive strontium had leaked into the ocean and that the leaks were still continuing.

The Pacific Ocean provides the main source of protein for about one billion people in Asia alone. Ken Buesseler, senior scientist at the Woods Hole Oceanographic Institution in Woods Hole, Massachusetts, reported that Fukushima released ten to one hundred times more radiation into the ocean than the 1986 Chernobyl catastrophe.

The first debris from the tsunami began washing ashore on the West Coast of the United States in December 2011, a year earlier than predicted. Residents of the Pacific coastal cities have found large quantities of bottles, cans, lumber, and other trash, the forerunners of the estimated nineteen million tons of debris from the Fukushima area floating across the Pacific, an “island” of assorted debris thought to be the size of Texas. The huge mass should reach Hawaii by February or March 2012.

Almost from the day it happened, conspiracy theorists had begun to question whether the Fukushima disaster was the result of natural or technically engineered causes. Whenever the discussion occurred between conspiracists, the High Frequency Active Auroral Research Program (HAARP) was named as the most likely villain that might have caused such a tragedy. Based in Gokona, Alaska, HAARP is a jointly managed U.S. Air Force/Navy weather warfare program that has been operating since 1992.

On its official website (www.haarp.alaska.edu), HAARP acknowledges its ability to induce “a small, localized change in ionospheric temperature so that resulting reactions can be studied by other instruments located either at or close to the HAARP site.” Such researchers as Rosalie Bertell, president of the International Institute of Concern for Public Health, insist that HAARP can accomplish far more than “localized changes in temperatures.” Bertell describes HAARP as a “gigantic heater that can cause major disruptions in the ionosphere, creating not just holes, but long incisions in the protective layer that keeps deadly radiation from bombarding the planet.”

In Bertell’s opinion, while HAARP is presented to the public as a device for repairing the ozone or as a space shield against incoming weapons, it has the ability to “deliver very large amounts of energy, comparable to a nuclear bomb, anywhere on earth, via laser and particle beams.”

Conspiracists have long claimed that HAARP has the power to trigger floods, droughts, hurricanes, tsunamis, and power blackouts over major cities and surrounding areas. To control the weather to cause an earthquake and tsunami like the Fukushima disaster would be well within its capabilities.

A television documentary on HAARP by the Canadian Broadcasting Company in 2010 reported on the international discomfort over what appears to be a secret weapon used for electromagnetic warfare: “It isn’t just conspiracy theorists who are concerned about HAARP The European Union called the project a global concern and passed a resolution calling for more information on its health and environmental risks. Despite those concerns, officials at HAARP insist the project is nothing more sinister than a radio science research facility.”

If HAARP was responsible for the worst nuclear disaster since Chernobyl and a great loss of life and terrible economic suffering, why was Japan a target?

Some conspiracy theorists suggest that it was an awful miscalculation of the power of the electromagnetic mechanisms employed by HAARP. An experiment that was intended to test power on an area of open sea was misdirected to eighty-one miles east of Japan’s Oshika Peninsula of Tohoku. More cynical conspiracists say that HAARP doesn’t make mistakes—especially now that it has been taken over by agents of the New World Order. Japan may be only the first of the new high-tech nations to feel the power of those who have mastered electromagnetic warfare. Who will be the next example made for the egomaniacal satisfaction of those shadowy figures who seek world domination?