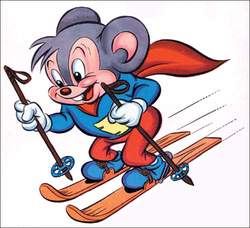 It’s a dog-eat-cat world in the land of animated cartoons. Endangered by falling anvils and ubiquitous dynamite, as well as ravenous, predatory toons loony for a meal of a weaker species, anthropomorphic animals need their superheroes, too.

The first big cheese was Mighty Mouse, originating as “Super Mouse” in the theatrical short The Mouse of Tomorrow (1942). If Terrytoons animator “Izzy” Klein had his way, this diminutive dynamo would have been “Super Fly.” Head honcho Paul Terry, seeing dollar signs in a merger of Mickey Mouse and Superman, appropriated and altered Klein’s idea, little realizing that Standard Comics had just beaten him to the punch with its own Supermouse (whose comics ran until 1958), leading Terry to change his character’s name. Bursting into action by singing an operatic strain of “Here I Come to Save the Day,” Mighty Mouse rescued his sweetie Pearl Pureheart, or other random rodents, from the clutches of a cagey cat named Oil Can Harry, through decades of cartoons and comic books published by St. Johns, Pines, Dell, and Gold Key Comics. He was a staple of Saturday morning television for many years, including CBS’s Mighty Mouse: The New Adventures, Ralph Bakshi’s subversive 1987 interpretation, peppered with double-entendres that flew over the heads of children—but not their parents. Watchdog groups incensed over a flower-sniffing sequence that allegedly mimicked cocaine use lobbied Bakshi’s Mouse off the air.

Hoppy the Marvel Bunny, a Bugs Bunny/Captain Marvel amalgamation, bounced into Fawcett Comics in 1942. Two different Super Rabbits premiered in 1943: the first, an original character published by Marvel Comics, and the second, a Superman parody in a classic Bugs Bunny short. DC Comics’ McSnurtle the Turtle, the slow-as-molasses alter ego of the Terrific Whatzit, a funny-animal version of DC’s own speedster the Flash, bowed in 1944. One of the original Captain Marvel’s best friends is Mr. Tawky Tawny, a talking tiger, while one of his greatest enemies is the diabolical Mr. Mind, a tiny genius worm from outer space. From the ashes of the post-World War II atomic age rose Charlton Comics’ Atomic Mouse in 1953, joined by spin-offs Atom the Cat and Atomic Rabbit. Cartoonist Henry Boltinoff’s Super Turtle, a half-page humor strip, appeared in the 1950s and 1960s as filler in many of DC’s titles.

Funny-animal heroes arrived on the budding medium of television in 1948 in the form of Crusader Rabbit. This low-budget series starred a clever bunny hero and his lumbering, dim-bulb buddy Rags the Tiger in narrated comical capers with cliff-hanger endings. Sound familiar? Co-creator Jay Ward later recycled this concept with Rocky and Bullwinkle. In the 1960s, the boob tube became a super zoo: Quick Draw McGraw paraded about as the Zorro parody El Kabong, and Bob Kane, the father of Batman, came up with a funny animal version of his own creation with Courageous Cat and Minute Mouse. “Humble and loveable” Shoeshine Boy popped power pills to change into Underdog (1964), who was voiced by Wally Cox, and spent his series rescuing the demure Polly Purebread; Hyram Fly slipped on his “supersonic glasses” to become lightning-fast hero Fearless Fly on the Milton the Monster Show (1965); Hanna-Barbera’s invincible insect Atom Ant debuted in 1965; Batfink (1966) featured a steel-winged rodent with a sidekick named Karate; and Ward’s wacky George of the Jungle featured Super Chicken (1967), whose powers came from guzzling a concoction called “Super Sauce.” More toon titans would follow, including Hanna-Barbera’s Hong Kong Phooey (1974) and Dyno-Mutt (1976); Danger Mouse, (1981) from the United Kingdom; and Disney’s Darkwing Duck (1991). Daffy Duck briefly took on the role of the DC Comics superhero Green Lantern in a 2003 episode of the animated TV series Duck Dodgers.

Writer/artist Joshua Quagmire introduced Cutey Bunny, the world’s first African American rabbit superheroine, in 1982. DC’s Captain Carrot and His Amazing Zoo Crew, a funny-animal superteam, created by Roy Thomas and Scott Shaw, launched in 1982, and Marvel’s porcine version of Spider-Man—Peter Porker, the Spectacular Spider-Ham— wallowed into comics in 1983. Stan Sakai’s samurai “rabbit bodyguard,” Usagi Yojimbo, got his start in 1985, and occasionally appears today. One of the denizens of Kurt Busiek’s Astro City is Looney Leo, a talking lion cartoon character who was brought to life, and who was once the sidekick of the superhero known as the Gentleman.

But no funny-animal heroes in recent memory have scored a larger success than the Teenage Mutant Ninja Turtles. Premiering in 1984 as a black-and-white comic, these “Heroes in a Half Shell” quickly blasted into a mega-media empire, including television animation, a live-action movie franchise, and a line of action figures. After a period of dormancy, the Turtles returned to the TV screen and toy shelves in 2003.

Although he’s not a comedy character, Rocket Raccoon is indeed a talking animal, and also a superhero who has adventures in outer space. Created by Bill Mantlo and Keith Giffen, Rocket Raccoon debuted in Marvel Preview #7 (Summer 1976). Recently Rocket Raccoon joined Marvel’s new Guardians of the Galaxy team.

The title character of the 2008 Disney computer-animated movie Bolt is a dog who stars on a television series as a heroic, superpowered pet. Bolt (voiced by John Travolta) believes he actually has superpowers, until he is accidentally shipped from Hollywood to New York City. Far from the studio, Bolt comes to realize the truth as he travels cross-country to return to his beloved co-star, a girl named Penny. Ultimately Bolt proves himself to be a true hero by saving Penny from a studio fire. —ME & PS