Also found in: Dictionary, Thesaurus, Medical, Acronyms, Idioms.
The following article is from The Great Soviet Encyclopedia (1979). It might be outdated or ideologically biased.

mechanisms designed to produce the detonation of charges of ammunition (shells, mines, bombs) upon striking the target, in the vicinity of the target, or at the required point of the flight trajectory.

Depending on the principle determining the moment at which the device is triggered, fuses are subdivided into im-pact fuses, which are triggered by the shell’s impact against an obstacle; time fuses, which may be pyrotechnic, mechanical, or electrical (these trigger in the trajectory at a set time after firing, missile launch, or release of the bomb); proximity fuses, which may be radar-actuated, infrared, optical, capacitive, acoustic, barometric, or vibration-actuated (and which are triggered at an optimal distance from the target without coming into contact with it); and radio-controlled fuses, 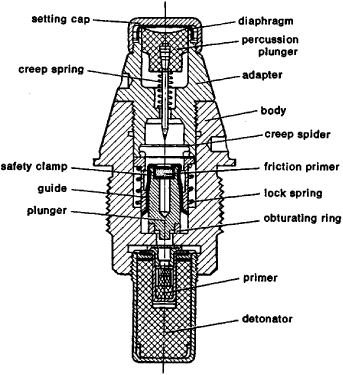 which are triggered upon receiving a coded external signal from base.

Common features of the fuse mechanism include the presence of a detonator circuit (the aggregate of components that ensure detonation of the explosive charge); actuators (firing pins with guards; electrical contacts; friction bars; and pistons), which effect ignition or explosion of the friction primer or detonator; and safety mechanisms (springs, diaphragms, caps, arming vanes, sliders, pellets, pins, and so on), which ensure fuse safety in handling, during firing, and in flight. The detonation of fuses is accomplished mechanically (the friction primer or detonator is triggered by the kinetic energy of the firing pin or by force of friction when the friction bar is removed—so-called friction fuses; see Figures 1-4), electrically (an electric primer or electric detonator is triggered by 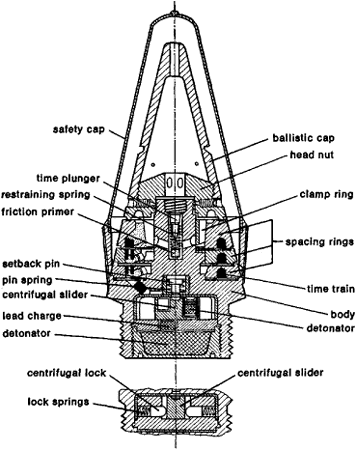 means of an electrical impulse), or chemically (a reagent flowing from a broken ampul ignites a combustible com-pound).

Depending on the time delay between the instant of contact with the target (obstacle) and the explosion, a distinction is made between instantaneous percussion and delay impact fuses. In artillery and aviation fuses, instantaneous action is effected by unscrewing the safety cap just before firing (see Figures 1 and 2) or by unscrewing it in flight by means of an arming vane (see Figure 3). In the fuses of controlled mines, instantaneous action is provided by pressure, tension, tension-release, and discharging devices (see Figure 4). The delayed action of fuses is accomplished by switching the delay element into the detonator circuit (in artillery impact fuses), by installing a clock mechanism, or by using a chemical reagent (in controlled mines and aerial bombs). Artillery fuses have an assembly for mine inertial effect (see Figure 1) that initiates explosion of the shell after significant penetration into the obstacle. Fixed-delay (self-destroying) impact fuses make it possible to explode the shell in case it misses the target. Depending on the point at which the fuse is connected to the ammunition, fuses are divided into nose fuses (in fragmentation, high-explosive, high-explosive fragmentation, shaped-charge, and other shells, mines, and bombs), base fuses (in armor-piercing, concrete-piercing, and high-explosive projectiles and bombs), nose-base fuses (in 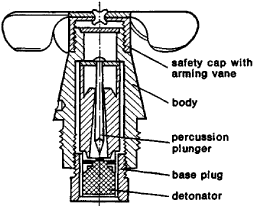 shaped-charge shells and mines), and body fuses (in aerial bombs). Some ammunition has several fuses to ensure reliability. Fuses in which the primer is separated from the detonator are called bore-safe fuses. Fuses in which the friction primer is separated from the detonator are called semibore-safe fuses. The presence of insulation increases the safety of fuses in case of premature actuation of the detonator or friction primer. The improvement of fuses is moving in the direction of increased efficiency, reliability, and safety of the ammunition. Feedback
Flashcards & Bookmarks ?
Please log in or register to use Flashcards and Bookmarks. You can also log in with
Flashcards ?
My bookmarks ?
+ Add current page to bookmarks
Mentioned in ?
References in periodicals archive ?
"PGK is a fuse that is smart and steers itself to the target using satellites," said Sgt.
New ammunition
This gives us a high degree of confidence in TRM's ability to simulate a fuse in this kind of simulation.
PCB fusing currents: why, relatively speaking, wider traces are quicker than narrower ones to reach the fusing temperature
Fuses ship from the factory calibrated to a specific set of operating parameters, ensuring that the fuse will operate as specified without maintenance and upkeep concerns.
Circuit breakers--are you protected? Fuses offer an alternative in maintaining uninterrupted service when implementing PDUs
The skilled artist will blend the fuse with details applied to represent feathers, muscle tone, fish scales, or similar finish work.
Chapter 7 Fusing: joining ice to ice
The scientists next documented that the envelope gene functions primarily in the trophoblast cells that fuse into the placental syncytium.
Do captured viral genes make human pregnancies possible?
In less than a millisecond, the computer transmits another electrical signal to the next fuse. KABOOM again!
Fireworks Grow Up!
* Identify blown fuse. Most screw-in fuses have a small window which when a fuse is blown will become discolored or will show a broken small metal strip (Fig.
Fuse protection
These advantages are due to the very simple design of fuses. The only working part is a small wire filament.
Insurance company rejects house with electrical fuse box
A fuse, however, must be removed if it has "blown," so the entire unit must be powered down in order to access the fuses for servicing.
The dinosaurs of circuit protection: while less expensive, fuses do not provide the same reliability and control as circuit breakers