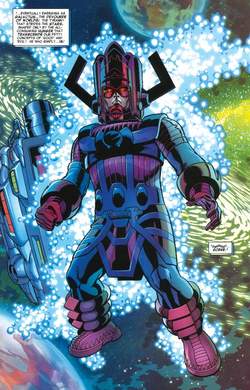 (pop culture)
For three months in 1966, Marvel Comics readers feared the end of the world. Flames engulf the sky in Fantastic Four #48 (1966), blanketing New Yorkers in “the dread grip of panic,” followed by a dense sea of space debris choking out the sunlight. As the Fantastic Four (FF) gather to investigate this phenomenon, the Watcher, the otherworldly observer pledged never to interfere with those he surveys, breaks his vow—the astronomical occurrences are his creation, he admits, unsuccessful shields to protect Earth. The entrance of the intergalactic scout the Silver Surfer portends a doom that arrives conveniently paced on a lastpage reveal in one of comics' greatest cliffhangers. Stepping from a sphere-like spacecraft is a millennia- old, grim, armor-clad giant who might have looked absurd in his winged, coffeemaker-shaped helmet were he not rendered by the king of comics and the king of cosmic, Jack Kirby. Bombastic dialogue by Stan Lee discloses the creature's mission and his name: “This planet shall sustain me until it has been drained of all elemental life! SO SPEAKS GALACTUS!” Many a kid paced impatiently for the next thirty days waiting for FF #49. What those readers discovered has since become legend. Issue #49's “If This Be Doomsday!” was actually act two of what is now known as the Galactus trilogy (concluding in issue #50). Mythological gods had long populated the pages of comic books, Marvel's own Norse pantheon in Thor among them. But with Galactus, the Devourer of Worlds, readers met not a god but the “God”—not literally, but by his own admission Lee found inspiration in the angry God of the Old Testament when searching for a bigger, more formidable FF supervillain. Yet the ravenous Galactus does not fancy himself a deity—“Do not the humans themselves slay the lesser beasts for food … for sustenance? Galactus does no less!”—but with his triumphant entrance, his limitless Power Cosmic, his grandiloquence (including his habit of making thirdperson references), and the Silver Surfer as his shimmering herald, Galactus is omnipotence incarnate. As Galactus methodically readies his “energy converter,” the humans buzzing around him are of no significance, until one of them—the Thing's girlfriend, Alicia Masters—appeals to the man that was once the Silver Surfer, turning the herald into the fallen angel as he stands against his master, leading the FF on a defiant showdown. The Devourer of Worlds is vanquished by Reed (Mr. Fantastic) Richards, who possesses the Ultimate Nullifier, a weapon powerful enough to stay Galactus' mighty hand. Hence, a truce is negotiated, Galactus vowing never to invade Earth again in exchange for the Nullifier, a pact harkening back to God's oath to Noah that He would never again flood Earth. The Galactus trilogy is regarded by many historians and fans as the zenith of Lee and Kirby's fertile collaboration. But their magnum opus raised the cosmic-story bar to an unattainable height. The numerous reappearances of Galactus—he turned away from Earth but found other planets appetizing, as a result combating virtually every Marvel superhero along the way, plus scads of supervillains and alien races—have adequately entertained, but for those who first read the original tales, never quite satisfied. Yet Galactus has continued to send ripples throughout the Marvel Universe. He is a primary component in the framework of the cosmos, along with other supreme entities such as Eternity, Death, Oblivion, and Infinity. Galactus' intergalactic feeding frenzies have been chronicled in numerous Marvel titles including issues of Fantastic Four, Thor, Silver Surfer, and Thanos, plus his own comics, Super-Villain Classics #1 (1983), the reprint edition The Origin of Galactus: #1 (1996), and Galactus: The Devourer #1–#6 (1999–2000). In addition to the Silver Surfer, Galactus' heralds have included Gabriel the Air-Walker, Terrax the Tamer, Firelord, Nova, Morg the Berserker, Red Shift, and Stardust; imbued with a portion of his Power Cosmic, these scouts traverse the galaxy searching for inhabited worlds whose life forces can be drained for Galactus' sustenance. The Devourer of Worlds has been presumably destroyed in some stories, only to later return. Before he was the Eater of Planets he was Galen (at times, Galan) of the planet Taa, an astronaut engulfed by his universe's implosive “Big Crunch.” Cocooning within a “Cosmic Egg,” he eventually exited as the cosmic being Galactus, an origin similar to the Fantastic Four's (astronauts given powers by cosmic rays). This parallel was not lost upon the FF's own Johnny (Human Torch) Storm, who, having temporarily assumed the powers of his sister, the Invisible Woman, served as the herald of Galactus in the four-part tale “Rising Storm” (FF #520–#523, 2005). Using his newly acquired Power Cosmic, Storm temporarily siphoned Galactus' energies, leaving him the aloof alien Galen, who received firsthand lessons about “the indomitable spirit of the humanoid order.” Galen exiled himself to another dimension to contain the swelling Power Cosmic, a redemptive gesture to halt “Galactus' wrath in this universe.” It is unlikely, however, that “this universe” has seen the last of Galactus. In the universe of Marvel's “Ultimate” titles, reimagined versions of its characters, writer Warren Ellis methodically escalated the coming of the Ultimate Galactus in the 2005–2006 miniseries trilogy, Ultimate Nightmare, Ultimate Secret, and Ultimate Extinction. Many of the Ultimate Marvel heroes—including, naturally, the Fantastic Four— united to ward off the impending locust-like plague of “Gah Lak Tus,” overhauled to resemble a black metallic skull with pincers. The original Galactus has occasionally invaded other media. Toy Biz has produced extra-sized action figures of the villain, including an 18-inch 2005 figure boasting 33 articulation points. The Eater of Planets chewed scenery in the animated series Fantastic Four (both the 1967 and 1994 incarnations) and Silver Surfer (1998–1999). He was parodied in animation as Omnipotus on The Tick (1994–1997) and as Lactose the Intolerant on Sam & Max: Freelance Police (1997). Galactus, sans face and with altered costume colors, made the cover of the 1969 album “Monster Movie” by the rock group the Can.
The Supervillain Book: The Evil Side of Comics and Hollywood © 2006 Visible Ink Press®. All rights reserved.