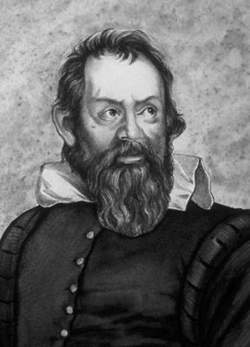 Galileo pioneered the experimental scientific method and was the first to use a refracting telescope to make important astronomical discoveries. Fortean Picture Library.

In 1616 the Roman Catholic Church was beset with problems. The new Protestant movement was growing by leaps and bounds. New worlds had been discovered, causing all manner of political, financial, and theological dilemmas. Intellectual Europe, awakening from its long slumber during the Middle Ages, was proposing all kinds of radical philosophies. Not least of these was the proposal that Earth was not, as previously thought, the fixed center of the universe. A free thinker named Nicolaus Copernicus (1473-1543) had dared to come up with a theory that planets orbited the sun, rather than the other way around. And a good Catholic churchman named Galileo Galilei (1564-1642) had gone and invented a telescope that he claimed proved Copernicus right. Ardent followers of Aristotelian logic had already been suspicious of Galileo. They had been pressing the Inquisition to ban Copernicus' book De Revolutionibus, and in 1616, the book was banned by decree. Galileo had made a trip to Rome to speak personally to them, trying to persuade folks in the church of what those outside the church were already excited about—namely, that when the plain words of the Bible conflicted with common sense, the Bible was probably being allegorical. In other words, it's perfectly okay to say "the sun rises in the east" without losing your theological footing if it turns out we suffer from an illusion every morning. But the church was afraid a scandal at this point would undermine its battle with Protestantism. So the Inquisition told Galileo to stop teaching Copernican nonsense and get back to being a faithful Catholic.

In 1623, however, Galileo thought he might have another chance. A longtime friend became pope. Galileo tried to get the 1616 decree revoked.

It didn't happen. But he did get permission to write a book discussing both the Aristotelian and Copernican worldviews. The understanding was that he could publish and teach as long as he promised to be impartial and not imply that God couldn't do whatever he wanted with his universe in ways humans couldn't possibly understand.

The resulting work was published in 1632 under the title Dialogue Concerning the Two Chief World Systems, and it was immediately hailed as a literary and philosophical masterpiece.

But Galileo's problems were only beginning. The new pope rightly deduced that people, especially liberal Protestants, were using the material to reinforce Copernican heresy. He declared that Galileo had broken his promise of 1616. The Inquisition sentenced him to house arrest for life and ordered him to publicly renounce Copernicus. The choice was to acquiesce or die by torture—not much of a choice. Galileo retired.

But his spirit was not broken. Four years before Galileo died, a copy of his manuscript was smuggled to liberal Holland and published under the name Two New Sciences. This book is considered the genesis of modern physics.

Galileo died in 1642. His life, perhaps more than any other, personified the modern perception of the separation of science and religion. Because of the human tendency to leap to black-and-white views, assuming every issue has only two sides, one is tempted to draw quick conclusions about the science/religion debate that oversimplify the argument.

Galileo was a loyal churchman all his life. At the same time, he believed his church was wrong about some issues. He obviously did not feel that religion was simply a way of explaining that which science does not yet understand. If that is all religion is, it is reduced to a form of mythology. To Galileo it was more than that. He saw no contradiction between religious belief and scientific inquiry. It is probable he viewed both as separate means to the same end. To picture him simply as a modern, radical "victim" of his "old-fashioned" church would be to rewrite history in accord with modern thought processes.

Of course the Inquisition was wrong. Modern popes have admitted it, long after such admissions could do Galileo any good. Galileo was bullied under threats of torture. But he also seems to have been a man of firm religious conviction. If so, he was certainly not the first to condemn his church while loving it still.

Feedback
Flashcards & Bookmarks ?
Please log in or register to use Flashcards and Bookmarks. You can also log in with
Flashcards ?
My bookmarks ?
+ Add current page to bookmarks
Mentioned in ?
References in periodicals archive ?
Galilei, Galileo. Galileo on the World System: A New Abridged Translation and Guide.
Gailileo on the World Systems: A New Abridged Translation and Guide