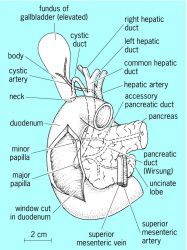 Feedback
Flashcards & Bookmarks ?
Please log in or register to use Flashcards and Bookmarks. You can also log in with
Flashcards ?
My bookmarks ?
+ Add current page to bookmarks
Mentioned in ?
References in periodicals archive ?
There has been controversy in the literature regarding routine or selective HPE of gallbladder specimens when cholecystectomy is performed for benign gallbladder diseases.
Routine histopathological examination of gallbladder specimens after cholecystectomy: Is it time to change the current practice?
MRCP (Magnetic resonance cholangiopancreatography) can help prevent unnecessary operation by evaluating the biliary tract and providing precise anatomical details excluding ectopic gallbladder but unfortunately, due to lack of resources in our country, MRCP was not advised and CTS (Computed Tomography Scan) was done whose report showed absence of the gallbladder and the diagnosis of GA was made.10 The patient is doing well on conservative treatment with antispasmodics.
A case of an absent gall bladder presenting as biliary colic in a tertiary care hospital in Karachi
Age, predisposing diseases, and ultrasonographic findings in determining clinical outcome of acute acalculous inflammatory gallbladder diseases in children.
ACUTE ACALCULOUS CHOLECYSTITIS IN A CHILD WITH HEPATITIS A INFECTION
Tw o cases of ectopic liver attached to the gallbladder wall.
Ectopic Liver Tissue on the Gallbladder
"Medications for gallbladder disease typically do not work," explains Dr.
The Cure for Gallstones Usually Is Gallbladder Surgery: If gallstones are causing severe pain, gallbladder removal is usually the most effective treatment
Clinical and pathological features of intraductal papillary neoplasm of the biliary tract and gallbladder. HPB (Oxford), 17(9):811-8, 2015.
Neoplasia Papilar Intracolecistica. Reporte de un Caso y Revision de la Evidencia Existente
Gallbladder carcinoma update: Multimodality imaging evaluation, staging, and treatment options.
Management of gallbladder carcinoma
Though congenital abnormalities in the form of ductal and vascular is the rule not the exception in relation to stone disease, yet congenital defect like agenesis is very very rare as far as gallbladder is concerned.
CONGENITAL AGENESIS OF GALLBLADDER--A HOSPITAL-BASED STUDY
A case of well differentiated mucinous carcinoma of the gallbladder. Nihon Shokakibyo Gakkai Zasshi 2010; 107:1821-7.
Acute Cholecystitis and Cholelithiasis Concurrence with Mucinous Adenocarcinoma
(3) However, there are few studies that have investigated the relationship between gallbladder polyps and acute pancreatitis.
Cholesterolosis as a cause of acute pancreatitis
The long-term stimulation of gallstones and cholecystitis leads to epithelial proliferation and hypertrophy of the muscles of the gallbladder wall.
Pathogenesis of gallbladder adenomyomatosis and its relationship with early-stage gallbladder carcinoma: an overview
Faisal Ghani informed about the causes Cholecystitis a gallstone stuck in the cystic duct, a tube that carries bile from the gallbladder, is most often the cause of sudden (acute) cholecystitis.
Gallstones can become life threatening: Prof. Faisal Ghani