1. a room or building for exhibiting works of art
2. a covered passageway open on one side or on both sides
3.
a. a balcony running along or around the inside wall of a church, hall, etc.
b. a covered balcony, sometimes with columns on the outside
4. Theatre
a. an upper floor that projects from the rear over the main floor and contains the cheapest seats
b. the seats there
c. the audience seated there
5. a long narrow room, esp one used for a specific purpose
6. Chiefly US a building or room where articles are sold at auction
7. Theatre a narrow raised platform at the side or along the back of the stage for the use of technicians and stagehands
8. Nautical a balcony or platform at the quarter or stern of a ship, sometimes used as a gun emplacement
Collins Discovery Encyclopedia, 1st edition © HarperCollins Publishers 2005

A long covered area acting as a corridor inside or on the exterior of a building or between buildings. A room, often top-lit, used for the display of artwork.

(1) A long, covered, well-lit space where usually one of the long walls is replaced by columns or posts and sometimes also by a balustrade. In the first half of the 16th century, especially during the baroque period, a new type of gallery was developed in European palace architecture: a spacious hall with a succession of large windows on one long wall. Beginning in the 17th century, such galleries contained the art collections of the palace owners. Later, art museums as well as their departments came to be called galleries. In modern architecture the gallery is an important functional element of gallery houses.

(3) Figuratively in Russian, a long row, a file (for instance, a galley of set type in Russian is called a galereia).

(Russian, shtrek), a horizontal, underground mine passage that has no exit on the surface and that usually follows the vein or rock in which it is excavated, in which case it may be called a drift or rock drift. Various types of galleries are distinguished according to purpose, including primary (main roads), panel, horizontal, excavation, intermediate, transport, and ventilation galleries.

[′gal·rē]
(geology)
A horizontal, or nearly horizontal, underground passage.
A subsidiary passage in a cave at a higher level than the main passage.
(mining engineering)
drift level
McGraw-Hill Dictionary of Scientific & Technical Terms, 6E, Copyright © 2003 by The McGraw-Hill Companies, Inc. 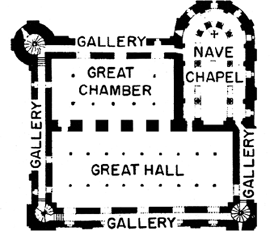 gallery, 1
1. A long, covered area acting as a corridor inside or on the exterior of a building, or between buildings.
2. An elevated area, interior or exterior, e.g., minstrel gallery, music gallery, roof gallery.
3. An elevated section of the seating area of an auditorium, esp. the uppermost such space.
4. In buildings for public worship, a similar space, sometimes set apart for special uses.
5. A service passageway within a building, or linking a building underground to exterior supplies or exits. Some service galleries also serve sightseers, e.g., the lighting gallery in the base of the dome at St. Peter’s, Rome.
6. A long, narrow room for special activities like target practice, etc.
7. A room, often top-lit, used for the display of art works.
8. A building serving such art needs.
9.See long gallery.
10. Any raised working platform at the side or rear of a theater stagehouse.
11. An arcade, 2.
12. (Brit.) A device, attached to a lampholder, for supporting a reflector, shade, etc.
McGraw-Hill Dictionary of Architecture and Construction. Copyright © 2003 by McGraw-Hill Companies, Inc.

Feedback
Flashcards & Bookmarks ?
Please log in or register to use Flashcards and Bookmarks. You can also log in with
Flashcards ?
My bookmarks ?
+ Add current page to bookmarks
Mentioned in ?
References in classic literature ?
`Well, mace in one hand and Weena in the other, I went out of that gallery and into another and still larger one, which at the first glance reminded me of a military chapel hung with tattered flags.
`Then, going up a broad staircase, we came to what may once have been a gallery of technical chemistry.
I remember a long gallery of rusting stands of arms, and how I hesitated between my crowbar and a hatchet or a sword.
View in context
Pellisson and Gourville went out together by the door of the gallery; Fouquet descended to the garden with the five last plotters.
View in context
Those who occupied the gallery to whom this injurious and unpolite speech was addressed, were the family of Cedric the Saxon, with that of his ally and kinsman, Athelstane of Coningsburgh, a personage, who, on account of his descent from the last Saxon monarchs of England, was held in the highest respect by all the Saxon natives of the north of England.
There was a murmur even among the attendants of Prince John; but De Bracy, whose profession freed him from all scruples, extended his long lance over the space which separated the gallery from the lists, and would have executed the commands of the Prince before Athelstane the Unready had recovered presence of mind sufficient even to draw back his person from the weapon, had not Cedric, as prompt as his companion was tardy, unsheathed, with the speed of lightning, the short sword which he wore, and at a single blow severed the point of the lance from the handle.
Thus urged, the Jew began to ascend the steep and narrow steps which led up to the gallery.
View in context
I had sense enough left to take his advice, and return to my post at the gallery door.
I drew back into a corner behind the door, facing the gallery stairs, and watched for her.
View in context
This hope was speedily dispelled like his other illusions; silence had indeed, been restored in the audience, after a fashion; but Gringoire had not observed that at the moment when the cardinal gave the order to continue, the gallery was far from full, and that after the Flemish envoys there had arrived new personages forming part of the cortege, whose names and ranks, shouted out in the midst of his dialogue by the intermittent cry of the usher, produced considerable ravages in it.
On the entrance of the cardinal, one would have said that an invisible magic thread had suddenly drawn all glances from the marble table to the gallery, from the southern to the western extremity of the hall.
View in context
They made signs for me to come down from the rock, and go towards the shore, which I accordingly did; and the flying island being raised to a convenient height, the verge directly over me, a chain was let down from the lowest gallery, with a seat fastened to the bottom, to which I fixed myself, and was drawn up by pulleys.
View in context