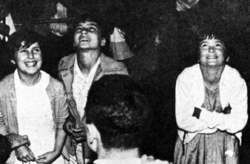 Children experience visions of angels and the Virgin Mary at San Sebastian de Garabandal, Spain. Invisible to adults, the visions were said to affect only children, who would go into a trance and receive holy kisses and communion. Fortean Picture Library.

The growing popularity of the devotion to the Virgin Mary as a result of the reported apparition at Fatima, Portugal, in 1916 and 1917 had repercussions in neighboring Spain in 1961. On June 18, 1961, at San Sebastian de Garabandal, a small town in northwest Spain, four young girls—Mari Loli Mazon, Jacinta Gonzalez, Mari Cruz Gonzalez, and Conchita Gonzalez—saw an angel. This initial encounter was followed by others. On July 1, the angel announced that on the next day, the Virgin Mary would appear under the form of Our Lady of Mount Carmel.

Many were present the next day, though as is common in such cases, only the children saw the two angels and the Virgin, who made her first appearance to them. During the apparition, they seemed to carry on a conversation with the Virgin. Such apparitions became common over the next four years. Some 2,000 were recorded through 1965. During the apparitions, the girls appeared to be in a trancelike state, with their heads drawn back and the pupils of their eyes dilated. They were oblivious to their surroundings and on occasion were subjected to pin pricks or burns, to which they paid no attention.

As the apparitions continued, religious objects were handed to the girls, and they presented them to the Virgin to be blessed with a kiss. The girls also received an invisible communion from the Virgin. This later aspect of the visions led to one of the more heralded events at Garabandal. At one point, the angel who had appeared to the children told Conchita Gonzalez that the invisible communion would become visible. On July 19, 1962, while in her ecstatic state, a white object appeared on her extended tongue. A picture, since widely circulated, captured the event.

The messages at Garabandal were somewhat mundane, calling for greater devotion and including only a few prophecies. Almost from the beginning, however, they became controversial and, along with devoted advocates, harsh critics arose. The local diocesan office made an initial evaluation in 1961. It concluded that the events in the isolated community offered no proof through which to understand the apparitions as true and authentic. In 1962 the local bishop ordered priests to refrain from saying mass relative to the apparitions. It was after this initial report that a number of tests were conducted on the girls by visiting scientists.

Finally, in 1986 the Bishop Juan Antonio del Val Gallo of Santander appointed a new commission to reevaluate the events at Garabandal. The results of the study were passed to Rome, and in 1987 the Bishop sanctioned priests celebrating massin the local church. The story did not end there, as in October 1996 the Bishop Jose Vilaplana of Santander issued a letter denying that the events at Garabandal were of supernatural origin. Although primarily unsupportive in his statements, the local bishop has left room for supporters of Garabandal to call attention to the messages and organize devotional activities, especially pilgrimages.

Feedback
Flashcards & Bookmarks ?
Please log in or register to use Flashcards and Bookmarks. You can also log in with
Flashcards ?
My bookmarks ?
+ Add current page to bookmarks
Mentioned in ?
References in periodicals archive ?
Aside from the appeal which the model of sanctity illustrated by Padre Pio had amongst Kamm and his later followers, equally important in the present context is that the developing cult of Padre Pio also became a focal point of wider conservative tendencies emerging during the period of Vatican II and after and heavily promoted by messages from a number of the unapproved Marian apparitions which occurred during the 1960s; notably those of Conchita Gonzalez at Garabandal, Spain (1961 to 1965), and of Rosa Quattrini ("Mama Rosa") at San Damiano, Italy (1962).
Kamm, like numerous others in this developing spiritual milieu, became fascinated with the controversial apparitions at San Damiano, with its harsh condemnation of communion in the hand, and with the apparitions at Garabandal, with their apocalyptic emphasis on an impending "Great Warning" a supernatural event where the entire world would experience "an interior realization of one's sins." (80) Reflecting on this period in the early 1970s Kamm wrote:
"Mourning the death of our faith": the little pebble and the Marian work of atonement 1950-1984
Masses flocked to Knock, Fatima, Medjugorje, Garabandal, Clearwater, and Conyers for a chance to see the Virgin Mary, or, more often, to see the seers speaking with the Madonna.
Apologia pro Turismo: breaking inter- and intra-disciplinary boundaries in the anthropological study of tourism and pilgrimage
de Pena Sagra, prope San Sebastian de Garabandal, 30TUN87, sumergida en regatos, 1390 m, Fuertes & Olivan 1997, MACB 75940.
Notula chorologica Iberica (Bryophyta)
In 1961 Mary appeared to four young girls in the small Spanish village of Garabandal, where for 5 years the faithful were urged to pray and repent to preserve the church.
The Experience of Marian Apparitions and The Mary Cult
Several sources at Steubenville, however, say that Miravalle encourages a fascination with Marian apparitions such as Fatima and Garabandal, and that this interest at times shades off into apocalypticism.
What kind of model is Steubenville?
But-as with the Vatican's denunciation of the supposed apparition at Garabandal in Spain in the sixties-we can make a good guess.
Virginity Regained
As noted above, prophecies and their accompanying supernatural manifestations had been a lifelong obsession for Dupont, and stories about the latest apparitions at Garabandal in Spain, (43) a weeping statue of the Madonna in New Orleans, (44) or the divine portents which the comet Kohoutek held, were all regular features in World Trends alongside articles pertaining to the problems surrounding the New Mass and criticisms of the theology of figures like the bete noire of traditionalists Pierre Teilhard de Chardin.
The Road to Schism: Yves Dupont and the Latin Mass Society of Australia 1966-1977
He and Carol took tales of Marian apparitions seriously, devoting a 1987 European vacation to hitting the top sites -- Fatima, Portugal; Lourdes, France; Garabandal, Spain; and Medjugorje, Bosnia.
Gimme that end-time (Catholic) religion: seer harmonizes apocalyptic views, catechism, pope