[¦gas ¦stȯr·ij]
(food engineering)
Storage in a low-oxygen atmosphere to delay ripening.
McGraw-Hill Dictionary of Scientific & Technical Terms, 6E, Copyright © 2003 by The McGraw-Hill Companies, Inc.
The following article is from The Great Soviet Encyclopedia (1979). It might be outdated or ideologically biased. 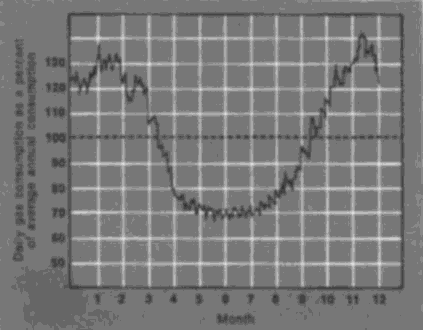 A gas transport system designed for peak gas demand would supply more gas than necessary for full-year operation, but a system based on minimum supply would not fully provide a city with gas during peak months of the year. Therefore, a gas transport system is designed on the basis of its average capacity, and gas storage facilities are established near large gas consumers. The seasonal variation of gas consumption is partly balanced by the so-called buffer consumers, who use a different type of fuel (usually fuel oil or coal) during the winter and switch over to gas for the summer.

There are two types of underground gas storage facilities: those created in porous rock and those in rock cavities. The first type includes storage reservoirs in depleted oil and gas deposits and those in water-bearing strata. Natural gas is usually stored in these in a gaseous state. The second type includes storage areas created in abandoned mine shafts, old tunnels, caverns, and special underground workings excavated in impervious rock (such as limestones, granites, clays, and halite-bearing rock). In rock cavities gases, usually propane, butane, and their mixtures, are stored especially in a liquefied state at the temperature of the surrounding environment and at pressures ranging up from 0.8-1.0 meganew-tons per sq m (8-10 kilograms-force per sq cm). Underground and aboveground storage of natural gas in a liquid state at atmospheric pressure and low temperature (so-called isothermal storage) has been in use on a commercial scale since the early 1960’s.

The most inexpensive and convenient gas storage facilities are those created in depleted oil and gas beds. These beds are adapted for storage by installing additional equipment, overhauling wells, and laying the necessary communications. In regions where gas reserves are required but depleted oil and gas beds are nonexistent, gas is stored in water-bearing strata. A water-bearing bed used for gas storage is actually an artificially created gas deposit that is exploited cyclically. The creation of such a deposit requires that the water-bearing bed be sufficiently porous and permeable, have a trap for the gas, and be so formed that the water can be forced out of the trap to the periphery of the bed. The trap is generally a domal bed rise covered with impervious rock, especially clays. The gas pumped into the trap expels the water from the trap and remains settled above the water. The dense deposits forming the roof over the collector bed keep the gas from permeating upward. The stratal water prevents the gas from escaping to the sides and down. The main difficulty in creating a gas storage reservoir in a water-bearing stratum is to ascertain whether the prospective part of the stratum can in fact be a trap for the gas. Moreover, when the stratum is inhomogeneous, it is usually necessary to expel the water completely from the stratum without simultaneously permitting the gas to escape beyond the trap. The creation of a gas storage reservoir in a water-bearing stratum requires an average of three to eight years and costs several million rubles. A period of two or three years is required for a return on the capital expenditures. Gas storage reservoirs in water-bearing strata are generally located at depths of from 200-300 to 1,000-1,200 m.

Gas storage in horizontal and gently sloping water-bearing strata was developed in the USSR on the basis of the theoretical work of I. A. Charnyi and was used on a commercial scale for the first time in the world in the creation of the Gatchina Underground Gas Storage Reservoir near Leningrad (1963). This method is based on the fact that a sufficiently large volume of gas in a water-saturated porous environment spreads very slowly and with insignificant leakages in a horizontal bed. Gas storage without traps is of great practical interest, since many gas-consuming regions lack conditions favorable for the creation of conventional water-bearing gas storage facilities.

Reservoirs constructed in halite-rock deposits represent the most important method of storing gas in rock cavities. The creation of this type of reservoir is 10-20 times cheaper than those in other types of rock. A capacity is usually created in the halite-bearing rock by leaching it with water through wells that are later used during the operation of the reservoir. The volume of a single cavern may be as much as 100,000 to 150,000 cu m. The washing of such a cavern lasts for three or four years. A reservoir in salt is created at depths ranging from 80-100 to 1,000 m and more. Deep reservoirs are expedient for the storage of natural gas, since they can sustain higher pressures and consequently contain more gas for a given volume.

Isothermal underground gas storage facilities (for example, for liquefied methane), which are trenches with frozen walls, are also very important. The upper part of the reservoir is reinforced with a concrete collar on which rests a steel roof with heat-insulating material. For the construction of an isothermal storage reservoir, a circular battery of wells is drilled around its perimeter in order to freeze the soil surrounding the future reservoir during the construction period. The freezing wells are no longer needed after the storage space is constructed and filled with liquefied methane. The liquefied methane is stored under atmospheric pressure at temperatures of -161° C to -162° C. The thickness of the frozen soil walls of the storage area slowly increases and reaches 10-15 m. Heat losses decrease in time. Low temperature is maintained in the storage reservoir because of the evaporation of some of the methane (2-4 percent per month). The vapors are collected, liquefied, and returned to the reservoir. The methane bleeding is performed by submersible centrifugal pumps, and subsequent regasification of the liquid is done in special installations. Isothermal gas storage facilities are created in different types of conditions, including weakly stable soils. Their geometric volume may be as much as 80,000 cu m. Isothermal storage of methane is usually considerably more expensive than the storage of methane in a gaseous state in water-bearing strata. Above-ground storage facilities—steel tanks with double walls packed with heat-insulating material—also are used for the storage of liquid hydrocarbons. Aboveground isothermal gas storage facilities are relatively expensive and use a great deal of metal, and therefore they are rarely used.

Historical background. The first underground gas storage facility was built in Canada (1915) in a depleted bed. The greatest developments in underground gas storage have been made in the USA, where there were 330 gas storage facilities in 1968 with a total capacity of 124 billion cu m. East Germany, Poland, Czechoslovakia, West Germany, France, and other countries also have underground gas storage facilities. The first in the USSR was the Bashkatov Gas Storage Reservoir in Kuibyshev Oblast (1958), based on a depleted gas deposit. The Kaluga Water-Bearing Gas Storage Reservoir, which began to be filled with gas in 1959, has been in operation since 1963. Its capacity is 400 million cu m. Later, the Shchelkovo Gas Storage Reservoir, one of the largest in the world, was created in a water-bearing strata; it holds approximately 3.0 billion cu m of gas at a maximum pressure of 11 meganewtons per sq m (110 kilograms-force per cu cm). The operating gas consumption rate at this reservoir is as high as 15 million cu m per day.