a machine that is used to obtain lowtemperature refrigeration, mainly in the temperature range from 12° to 150°K, by means of the expansion of a compressed gas. A characteristic feature of gas refrigerators is that the working fluid, which may be helium, hydrogen, neon, nitrogen, or air, completes an entire refrigeration cycle while remaining in the gas phase.

As a rule, a gas refrigerator is an ensemble of several units (Figure 1). The working fluid, which is compressed in a compressor, passes through a water or air cooler, where the heat of compression is removed. Then, after preliminary cooling in a regenerative heat exchanger, the working fluid enters an expander. The cold gas obtained after expansion cools an object in a refrigerated compartment and then either is returned through the regenerative heat exchanger to the compressor to be compressed again (in the case of a closed cycle) or is vented into the atmosphere (in the case of an open cycle). The type of expander depends on the method chosen to expand the compressed gas.

The refrigeration cycles used most often in gas refrigerators are based on one of the following principles: the throttling of the compressed gas through a narrow orifice (the Joule-Thomson effect), the expansion of the compressed gas in an expansion valve with the performance of external work, or the expansion of the gas from a constant volume without the performance of external 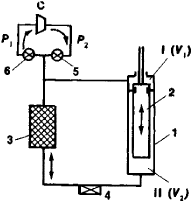 The main component of a gas refrigerator based on the Gifford-McMahon design (Figure 2) is a plastic piston that moves in a thin-walled cylinder containing two volumes v1 (hot) and V2 (cold), which are connected through a highly efficient regenerator with a checkerwork consisting of a thin metallic screen. The gas pressure is practically the same in the two volumes, and no work is performed when the piston moves. When Vl = 0, the system begins to fill with compressed gas. When the piston moves upward, the incoming gas is cooled in the regenerator, expands, and is cooled in volume V2, thus removing heat from the object to be cooled. When the piston moves downward, the gas is heated in the regenerator and leaves the system at a temperature that is higher than the temperature of the gas drawn from the compressor. The difference in the enthalpies of the incoming and outgoing gas flows determines the refrigerating capacity of the cycle. The energy removed from the object to be cooled is transferred to the environment as heat. The efficiency of this cycle is lower than that of cycles that entail the use of an expansion valve. However, gas refrigerators that operate on this cycle are compact, are simple in design, and may be readily constructed as multistage systems. Such systems make it possible to obtain very low temperatures, for example, 80°–100°K in a single stage and 14°–20°K in three stages.

Gas refrigerators are used to cool, for example, radiation detectors and quantum mechanical amplifiers (masers) as well as to liquefy gases.

Feedback
Flashcards & Bookmarks ?
Please log in or register to use Flashcards and Bookmarks. You can also log in with
Flashcards ?
My bookmarks ?
+ Add current page to bookmarks
Mentioned in ?
References in periodicals archive ?
The gas refrigerator worked on the absorption principle using a heat source to provide energy needed to drive the cooling process.
A better solution to air pollution issues
"It works on the principle of a gas refrigerator, using heat to expand gas," Gordon says.
WANTED: GADGETS, GIZMOS & CONTRAPTIONS
* If you smell an odor from your gas refrigerator have an expert service it.
The invisible killer: Carbon monoxide safety tips for your home and car
This gas, known as " biogas can also replace fossil-based natural gas to fuel an engine or an absorption cooling system, such as a gas refrigerator or chiller.
Make a biogas generator to produce your own natural gas: transform grass clippings, food waste or manure into renewable energy with a home-scale methane digester
If you don't have a gas refrigerator, you are probably wondering what these are.
Gas refrigerator DIY maintenance
Even during our first six weeks in our home here while we waited for the arrival of the gas refrigerator, we had an ice chest that we replenished with cubes on a daily basis.
Homesteading in Costa Rica
ABSORPTION REFRIGERATORS, also known as gas refrigerators, LP gas fridges or propane gas fridges, are fridges that use LP gas to keep food cold.
Need another refrigerator? Here are some ideas for non-electric refrigerators for home, cabin or backup