Gas-turbine engines with continuous combustion of fuel at constant pressure are the type that is most widely used in industry. In this engine (see Figure 1), compressed atmospheric air passes from the compressor to the combustion 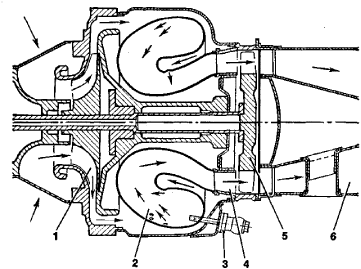 chamber, to which the fuel is supplied. As the fuel burns, it heats the air. The energy of the gaseous products of combustion is then converted to mechanical work in the gas-turbine. A large part of this work is expended in compressing the air in the compressor; the remaining part is transmitted to the unit being driven. It is this work that is the useful work of the engine. The useful work Le per kilogram of the working component is equal to the difference between the work Lt developed by the turbine during the expansion of the gas in it and the work Lc expended by the compressor for compression of the air in it. The operating cycle of a gas-turbine engine may be plotted on a graph in a PV diagram, where P is pressure and V is volume (see Figure 2). The greater the efficiency of the compressor and the turbine, the lower Lc and the higher Lt, that is, the greater the useful work. An increase in the temperature of the gas before it enters the turbine also facilitates a rise in useful work L’c (curve 3′4′, Figure 2). The operating efficiency of a gas-turbine engine is described by the ratio of useful work to the amount of heat expended to create the work. In modern gas-turbine engines the efficiency of compressors and turbines is 0.88-0.9 and 0.9-0.92, respectively. The temperature of the gas before it enters the turbine may be 1100°-1200° K in transportation and stationary gas-turbine engines and up to 1600° K in aviation engines. The use of heat-resistant materials in the manufacture of turbine parts and the presence of a cooling system have made possible operation at these temperatures. At the 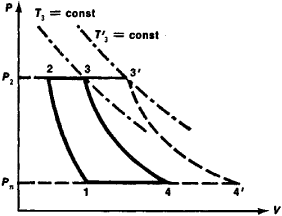 present level of advancement of the flow section and a gas temperature of 1000° K, the efficiency of a gas-turbine engine operating according to the simplest design is not higher than 25 percent. To increase efficiency, the heat in the gases leaving the turbine is utilized during the operating cycle to warm the compressed air supplied to the combustion chamber. Heat exchange between the exhaust gases and the compressed air going into the combustion chamber takes place in regenerative heat exchangers. The operating process of the gas-turbine engine during which the heat of the exhaust gases is utilized is called a regenerative process. The efficiency of a gas-turbine engine may also be raised by heating the gas during its expansion in the turbine using the heat of exhaust gases, as well as by cooling the air while it is compressed in the compressor (see Figure 3). In this way useful work increases because of an increase in the work Lm developed by the turbine and a decrease in the work Lc required by the compressor. A design for such a gas-turbine engine was introduced in the 1930’s by the Soviet scientist G. I. Zotikov. 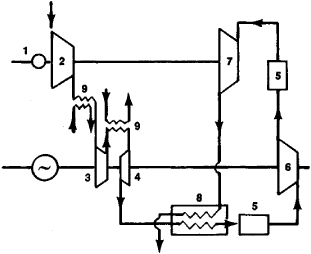 A compressor and low-pressure turbine are mounted on the same shaft, which is not connected to the drive shaft of, for example, a generator or screw propeller. Their rate of rotation can change depending upon the mode of operation; this significantly improves the efficiency of the engine when not at full power.

Gas-turbine engines may operate on gaseous fuel (natural gas, by-product fuel gases, gas-generator gases, gases from blast and carbon-black furnaces, and gases produced by underground gasification), liquid fuel (kerosine, gas oil, diesel oil, and mazut), and solid fuel (coal and peat dust). Heavy liquid and solid fuels are used in gas-turbine engines operating on a semiclosed or closed cycle (see Figure 4). In closed-cycle engines the working component is not discharged after its work in the turbine has been done; rather, it is used in the next cycle. Such gas-turbine engines allow for an increase in unit power and for the use of nuclear fuel. Gas-turbine engines have found wide application in aviation as the main engines of the power plants in airplanes, helicopters, and drone aircraft. Gas turbines are used to drive generators in steam power plants and in mobile electric power plants—for example, aboard trains. Gas-turbine engines may drive air and gas compressors while simultaneously producing electrical and heat energy; they are used thus in the petroleum, gas, metallurgical, and chemical industries. Gas-turbine engines may be used as the traction motors in gas-turbine locomotives, buses, freight and passenger vehicles, caterpillar tractors, and tanks; as the power plant of ships, cutters and submarines; to drive auxiliary machines and mechanisms such as winches and pumps; and in military installations as sources of energy and as traction power units. The sphere of application of gas-turbine engines has been widening. In 1956 the capacity of all gas-turbine engines in the world exceeded 900 MW; by 1958 it exceeded 2,000 MW, and by early 1968 it reached 40,000 MW (not including aviation and the military). The most powerful gasturbine engine produced in the USSR has a power of 100 MW (1969). The operating efficiency of the engines has reached 35 percent.

The development of gas-turbine engines is proceeding along the path of improvement of their components (the compressor, turbine, combustion chamber, and heat exchangers), increasing the temperature and pressure of the gas before it enters the turbine, and the use of combination power units with steam turbines and free-piston gas generators. The use of such units in stationary power systems and in transportation has shown that when the heat of exhaust gases is utilized and when the basic components are advanced, actual efficiency may reach 42-45 percent.

Feedback
Flashcards & Bookmarks ?
Please log in or register to use Flashcards and Bookmarks. You can also log in with
Flashcards ?
My bookmarks ?
+ Add current page to bookmarks
Mentioned in ?
References in periodicals archive ?
SPS now has fasteners made of Aerex 350, a proprietary super-alloy originally developed for bolting applications in gas-turbine engines. These fasteners offer high-strength and corrosion resistance, and are suitable for use in applications up to 1,350[degrees]F.
High-strength fasteners
According to Royal Caribbean, Jewel of the Seas, one of four Royal Caribbean ships equipped with LM2500+ smokeless gas-turbine engines manufactured by General Electric Marine Engines, was recognized for its use of a "very refined, distillate fuel, which virtually eliminates airborne emissions compared to internal combustion engines."
Royal Caribbean Honored for Use of Low-sulfur Fuel
They have has four massive gas-turbine engines and can reach speeds of 40 knots or 46 mph.
SPEEDY CROSSING