in printing, a machine designed for assembling signatures (from printed sheets) into books, pamphlets, and magazines. The machine consists of a head (with a drive mechanism and receivers), an assembly conveyor, and the required number of sections with groups of hoppers and devices (usually arms) for pulling out signatures. The general arrangement of the automatic gathering machine for placing one signature on top of another and the main variations in the operation of gathering machines are shown in Figure 1. Stacks of signatures (Si) are loaded into the hopper (H). Each arm (A) in turn separates the bottom signature from the stack and guides it to the assembly conveyor, which moves the sets being gathered to the receiver (R). The machine stops automatically if a signature is missed or two are pulled out instead of one; a signal shows where the trouble is. When one set of signatures is being gathered (Figure 1,a), the number of hoppers and arms is equal to the number of signatures in the book, and the assembly conveyor moves the intermediate products one step / for each working cycle. The hoppers are refilled and the receivers are loaded without stopping the machine. The gathering machine can select two identical sets (Figure 1,b) or two different sets at doubled conveyor speed with alternate output to two receivers (Figure 1,c). Such gathering machines (with pincer arms) are produced in several modifications, with numbers of hoppers n = 12 + 6q, where q is the number of attached sections. In two-conveyor gathering machines (Figure 1,d), the sets of signatures are fed out to a common receiver (R1) or separately to individual receivers (R2 and R3). 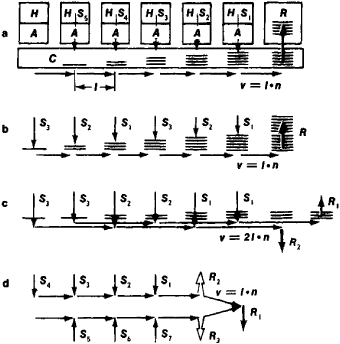 Figure 1. Diagrams of the operation of gathering machines

Gathering machines may have pincer arms (Figure 2,a), rotary arms (Figure 2,b), or friction devices (Figure 2,c). In the pincer devices the grabbers bend the signature back, the stoppers press against the stack and hold it, and the pincers grasp and separate the signature; in the rotary devices a group of hooks on the rotor grasp and separate the signature; and in friction devices the rollers press the signature against disks, which separate it. Pincer devices are reliable for slow and medium operating speeds (30 < n < 90 working cycles per minute). The rotary and friction systems are preferable for high-speed machines (up to 200 signatures per min from each hopper).

For pamphlets and magazines with a small number of pages, gathering machines are used that insert one signature into another; they are usually built into aggregates and multiple-operation flow lines. Gathering machines that gather sets of individual sheets are used to produce sets of postcards and posters and in small-scale step-and-repeat duplication.

Feedback
Flashcards & Bookmarks ?
Please log in or register to use Flashcards and Bookmarks. You can also log in with
Flashcards ?
My bookmarks ?
+ Add current page to bookmarks
Mentioned in ?
References in periodicals archive ?
Still more broadly, the Internet as it has evolved over the past couple of decades is essentially a data gathering machine, in which we all trade information about ourselves -- our likes and dislikes, what we look at on the Web, our countless online utterances -- in exchange for free services we need, or merely enjoy.
Analysis: What the life and death of Cambridge Analytica tells us about politics -- and ourselves
The evolution of digital technology will always put citizens a step behind the massive, dispassionate corporations and America's intelligence gathering machine. Only through the individual courage of citizens like Edward Snowden will we have the ability to safeguard our freedoms.
Critical thinking
Speculation was growing within political circles that Koizumi would not take the risk of making a Shinto shrine visit until at least the election is over as such action could imperil his party's ties with its ruling coalition partner New Komeito party known to mobilize a powerful vote gathering machine in an election.
LEAD: Koizumi indicates not to visit Yasukuni around Aug. 15
OUR revelations today that the IRA intelligence gathering machine has led to yet more warnings from police that people could be at risk are nothing less than devastating.
Voice of the People: Who will take the blame for killing off peace hopes?
Public debate so far has centred on the idea of a Scottish Six - an hour of international UK and Scottish news stories produced and edited in Scotland, drawing on the strengths of the BBC's unrivalled news- gathering machine around the world.
We have to work together to make the BBC the best
The danger in gathering machine data, he says, is to gather too much and create "an avalanche of false alarms that just aggravates people."
CIM comes to thermoforming