Gautier, Théophile (tāôfēlˈ) (gōtyāˈ), 1811–72, French poet, novelist, and critic. He was a leading exponent of “art for art's sake”—the belief that formal, aesthetic beauty is the sole purpose of a work of art. An important manifesto of this theory appeared in the preface of his novel Mademoiselle de Maupin (1835). Gautier was a painter before he turned to writing. His theory of plasticity, that words should be used as the painter and sculptor use their tools, is illustrated in his volumes of poems Voyage en Espagne (1845) and Emaux et camées [enamels and cameos] (1852). His other works include the poem La Comédie de la mort (1838), the novel Le Capitaine Fracasse (1863), and L'Histoire de l'art dramatique en France (1858–59). He prepared the way for the Parnassians and symbolists in their reaction against romanticism.

His daughter, Judith Gautier, 1850–1918, was married to the poet Catulle Mendès and then to Pierre Loti, with whom she wrote the novel La Fille du ciel (1911; tr. The Daughter of Heaven, 1912). Her novels, poems, and essays were usually on Asian subjects. She was the first woman to become a member of the Goncourt Academy.
The Columbia Electronic Encyclopedia™ Copyright © 2022, Columbia University Press. Licensed from Columbia University Press. All rights reserved. 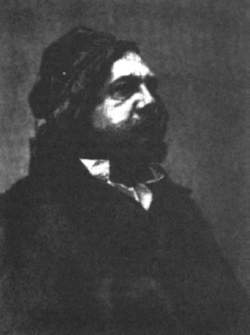 French writer Théophile Gautier was fascinated by the vampire myth.

Pierre Jules Théophile Gautier, a French romantic author, was born in southern France, the son of Antoinette Adélaide Cocard and Jean Pierre Gautier. As a child, he read Robinson Crusoe, and at school he associated with Gérard de Nerval (who later translated Faust into French).

As a young man, he was affected by E. T. A. Hoffmann’s tales and Goethe‘s “The Bride of Corinth.” Gautier also became associated with the circle of writers around Victor Hugo. Throughout the early 1830s, he frequented a variety of literary gatherings, including one that gathered at the Hotel Pimodan; famous for its indulgence in opium.

A change in family fortune in the 1830s forced Gautier to work as a journalist; and he worked at it, somewhat unhappily, for the rest of his life. He authored thousands of reviews as a literary, theatre, and art critic. Gautier’s long hours of work earned little more than a modest living and few honors during his lifetime. Apart from newspaper work, he wrote many romantic stories, although his role in the larger romantic movement was overshadowed by that of Victor Hugo. His own exploration of the psyche, in part stimulated by the use of opium, gained greater acknowledgement in the years since his death, when Gautier finally took his place among France’s outstanding nineteenth-century writers.

Like many other French romantic writers, Gautier found great inspiration in the vampire myth. His earliest and most famous vampire story, La Morte Amoureuse (literally, “the dead woman in love”) appeared in 1836. An English translation appeared in The World of Théophile Gautier in 1907 and was published separately in 1927 as The Beautiful Vampire. The story used what was to become a recurring theme in Gautier’s fiction. It told of a woman who returned from the dead to vampirize the male subject of the story. In The Beautiful Vampire, the dead woman, Clairmonde, made herself so attractive to her male lover, the priest Romuald, that he chose to bleed to death rather than lose her attention.

The theme would reappear, for example in Aria Marcella, which was directly inspired by Goethe’s “The Bride of Corinth,” in which Gautier declared, “No one is truly dead until they are no longer loved.” The 1863 novel The Mummy’s Foot was set among archaeologists in Egypt. In it a mummy, which retained the elasticity of living flesh and had “enamel eyes shining with the moist glow of life,” was compared to a vampire lying in its tomb dead … yet alive.

Another vampiric story, Spirite (1866), used recently popularized spiritualism as the setting. The story told of a man who experienced both the symbolic and actual death of his love. She first became a nun (and thus died to the world) and then physically died. When the woman took her vows, she gave herself to her love and vowed to be his beyond the grave. Contact was made in a seánce and she ultimately lured the man to his death.

During the last years of his life, Gautier lived in a Paris suburb, where he died from a heart condition in 1872. Most of his romantic tales have been translated into English.

In his youth Gautier was an adherent of romanticism but later became the spiritual father of the Parnassian school. His early Poems (1830), the narrative poem Albertus (1833), the tales Young France (1833), and the verse collection Comedy of Death (1838) exhibit traces of Byronic demonism; he combined an inclination to fantasy with measured verse. Rejecting bourgeois everyday life as a kingdom of vulgar men and hucksters, Gautier gave one of the first full-scale substantiations of the theory of “art for art’s sake,” in the foreword to the novel Mademoiselle de Maupin (1835–36) and in articles in the book The New Art (1852). He rejected both petit bourgeois moralizing and democratic ideological content in literature. In the lyric miniatures of the collection Enamels and Cameos (1852; Russian translation, 1914), the elegance, fluidity, and color of things underscore his indifference to what he considers transitory passions.

Gautier’s penchant for the picturesque re-creation of distant periods and countries found expression in his Novel About a Mummy (1858; Russian translation, 1911), set in ancient Egypt; in his adventure novel about the life of itinerant actors in 17th-century France, Captain Fracasse (1863, Russian translation, 1895, 1957; expanded French editions in 1929, 1942, 1961, France); and in Journey to Russia (1867).

Gautier’s more interesting works of criticism include Grotesques (1844), about forgotten poets of the 15th through 17th centuries, A History of Romanticism (1874, posthumous), and his essay on Baudelaire (Russian translation, 1915). V. G. Benediktov, V. Ia. Briusov, and N. S. Gumilev have translated Gautier’s poetry into Russian.