[′gir ‚drīv]
(mechanical engineering)
Transmission of motion or torque from one shaft to another by means of direct contact between toothed wheels.
McGraw-Hill Dictionary of Scientific & Technical Terms, 6E, Copyright © 2003 by The McGraw-Hill Companies, Inc.
The following article is from The Great Soviet Encyclopedia (1979). It might be outdated or ideologically biased.

Gear drives are classified according to the relationship of the axes to the drives (Figure 1): spur gearing, with parallel 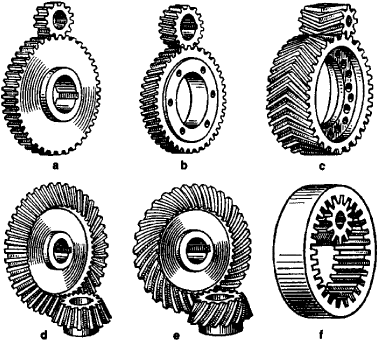 axes; bevel gearing, with intersecting axes and, in rare instances, spur-bevel and flat spur gearing; and screw drives (worm gears, hypoid gears, and screws), with overlapping axes. Rack-and-gear drive is a special type of gear drive which transforms rotary motion into translatory motion or vice versa. Most machines and mechanisms use external gearing—that is, gears with teeth on their outer surface. Internal gearing, in which case one gear has teeth cut into its inner surface, is used less frequently.

Gears are made with spur teeth for operation at low and medium speeds in open drives and in transmissions, with helical teeth for use in highly stressed drives at medium and high speeds (more than 30 percent of all spur gears), with double-helical teeth for transmitting large moments and high power in heavy machines, and with spiral teeth in all highly stressed gear drives. As a rule, gears with a constant gear ratio i =w1/w2 = z2/z1, where w1, z1 and w2, z2 are the angular velocity and number of teeth of the high-speed and low-speed gears, respectively, are used in machines and mechanisms. Gear drives with variable gear ratios involve eccentric spur gears which impart a predetermined, smoothly changing speed to the driven element while the drive element operates at a constant speed. Such gear drives are rarely used. The gear ratio of one pair of gears in reducers is usually as high as 7:1; in a transmission, up to 4:1; and in the drives of machine stands, up to 20:1 or more. The circumferential speeds of high-precision spur gear drives is up to 15 m/sec; of helical gears, up to 30 m/sec; and of high-speed drives, up to 100 m/sec.

Gear drives are the most practical and widespread type of mechanical transmission. They are used to transmit power— from negligibly small values to tens of thousands of kilowatts-and to transmit circumferential forces of fractions of a gram to 10 meganewtons (1,000 tons-force). The main advantages of gear drives are their significantly smaller dimensions, high efficiency (losses in precision-made, well-lubricated drives are 1-2 percent, and, under especially favorable conditions, 0.5 percent), longer life and greater dependability, lack of slippage, and small shaft loads. The disadvantages of gear drives include noisy operation and the need for precision manufacture. 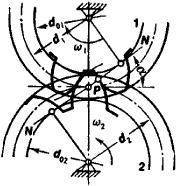 contact is the point of contact of the pitch (primary) circles of the gears—that is, the circles that rotate against each other without slippage. The diameters of the pitch circles d1 and d2 can be determined from the ratios

where A is the distance between the axes of the gears. Many curves satisfy this condition, particularly involute gears, which are best suited for shaping gear teeth from the point of view of combining operational and technological properties; therefore, involute gears have become predominant in machine building. Gears with involute profiles can be cut by a single tool, regardless of the number of teeth, and in such a way that every involute gear can be engaged to gears with any number of teeth. The shape of the teeth on the tool can be rectilinear, which is convenient for manufacturing and quality control. Involute gearing is little influenced by variations in the distance between axes. The gear teeth make con-tact at points of the line of contact that pass through the pole of contact at a tangent to the basic circles with diameters d01 = d1cos α and d02 = d2cos α, where α is the generating angle. The main dimensional parameter of involute and other gearings is the modulus m , which is equal to the ratio of the diameter of the pitch circle of the gear dp to the number of teeth z - For uncorrected involute gearing, the initial and pitch circles coincide:

In shaping a gear, the profile of a so-called producing rack is outlined according to the initial contour of the main rack (Figure 3), which is produced by increasing the number of

teeth in a normal involute gear to infinity. The teeth of the producing rack have increased height h = (h’ + h”) to form the radial clearance in gearing (c0m thickness along the pitch circle s, radius of curvature ri, tooth pitch t, and generating angle αp. In helical gears the initial contour is taken in a section normal to the line of the tooth. 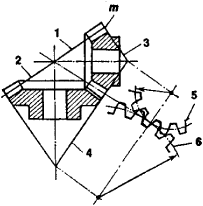 In addition to involute gearing, clock mechanisms and certain other instruments use cycloid gearing, which operates with smaller friction losses and makes possible the use of gears with a small number of teeth but does not have the advantages of involute gearing mentioned above. Drives that were proposed in the 1950’s by M. L. Novikov (Figure 5) are

used in heavy machinery along with involute drives. The shapes of the gear teeth in a Novikov drive are determined by the arcs of circumference. The protruding gear teeth on one gear (usually the smaller one) engage the recessed teeth on the other. The initial contact (without load) is at a point. The gears in a Novikov drive are helical. The points of contact of the gear teeth do not shift along the height of the teeth but rather only in the direction of the axis, so that the line of contact is parallel to the axes of the gears. Among the advantages of such gear drives are reduced bearing stress, favorable conditions for formation of an oil wedge, and the possibility of using gears with small numbers of teeth and, hence, higher gear ratios. The supporting power of Novikov drives on the basis of contact strength is essentially higher than in involute gear drives.

The satisfactory operation of gear drives requires high precision. Twelve degrees of precision are provided for gear drives; they are selected on the basis of the purpose and conditions of operation of the drive involved.

The main reasons for the breakdown of gear drives are the breaking of gear teeth, the fatigue pitting of the surface layers of gear teeth, abrasive wear, and binding of the teeth (which occurs when the oil film is broken by high pressures or temperatures).

The main materials for gears are alloy steels that undergo thermal or chemicothermal treatment: surface tempering, mostly with high-frequency currents; volume tempering; case hardening; nitrogen case hardening; and nitriding and cyaniding. Gear drives made from steels improved by thermal treatment before the teeth are cut are made without strict requirements for dimensions, usually in small series or individual production. When particularly quiet operation is required, and when loads are small, one of the gears is made of plastic (textolite, kaprolon, wood laminates, or polyformaldehyde), and its counterpart is made of steel. Gear drives are designed to resist bending pressures in the dangerous section at the bases of the teeth and contact pressures in the pole of contact.

Gear drives are used in the form of simple single-stage drives and of various combinations of several drives built into machines or made as separate units. Gear drives are widely used to reduce angular velocities and increase the torque in reduction gears. Reduction gears usually operate in independent units of one, two, and three stages and with gear ratios of 1.6-6.3:1, 8-40:1, and 45-200:1, respectively. Two-stage reduction gears are the most common type (about 95 percent). Transmissions are used to produce various speeds of rotation of the final shaft while maintaining a constant speed of rotation of the drive motor. The potential of gear mechanisms is increased by the use of planetary drives, which are used as reduction gears and as differential mechanisms. The small size and weight of planetary gear drives are due to distribution of the load over several gears (satellites) performing planetary motion and to the use of internal gearing, which has a greater supporting power. Planetary drives are 1.5-5.0 times smaller in mass than simple drives. Wave transmissions have the smallest relative size and can handle heavy loads with a high degree of kinematic precision and rigidity.