a technique for generating improved tooth shape in gears of involute design. During the gear-cutting process the initial standard contour of the pinion generating tool is displaced radially in such a way that the pitch line of the tool does not touch the pitch circle of the gear. Normal pinion cutting tools (chasers, hobbing tools, and other devices) or a gear cutter may be used in these cases. Processing is done on a gear cutter by the generating method, in which the gear cutting takes place with the required displacement of the initial contour.

Gear shaving originated as a means for avoiding undesirable undercutting of the root of the tooth in gears with small numbers of teeth (caused by imperfections in the tool). Modern gear shaving has a more general meaning and consists in a predeter-mined displacement of the initial contour, which is one of the main geometric parameters of gears. The displacement from the center of the gear may be negative or positive (Figure 1). In the case of positive displacement, the tooth profile uses portions of the involute with large radii of curvature, which increases the contact strength and breaking strength of the teeth. Gear shaving may be used to improve the quality of meshing between two gears or between a gear and a rack. The selection of the appropriate displacement can decrease the slippage of teeth against each other, reduce wear, decrease the danger of jamming, and in-crease the efficiency of transmission. 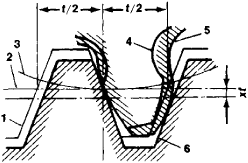 Gear shaving makes possible variation of the interaxial distances in gear transmission, which provides a solution for a number of important design problems. For example, gearboxes, planetary drives, and other mechanisms may contain transmission elements between two shafts, in which the same gear may mesh with others having different numbers of teeth; in addition, nonstandard gears may be replaced by standard gears during repair.

The displacement coefficient x, which is equal to the displacement of the initial contour divided by the gear modulus, is used in determining the geometry of shaved gears. If the value x1 is used for the first gear and the x2 value is used for the second gear, the following limiting conditions must be taken into account: absence or reduction of undercutting at the root, absence of interference (that is, intersection of the tooth profiles during relative motion of the gears), generation of a coefficient of overlap that is sufficiently high to reliably provide engagement of the next pair of teeth before the preceding pair disengages and the absence of pointed crowns (generation of adequate tooth thickness at the crown). A convenient method for calculating these conditions’by means of a correlation diagram, using curves plotted in x1, x2 coordinates’has been developed in the USSR. Such diagrams reflect the limitations mentioned above and form a closed contour describing the area of permissible combinations of x1 and x2 (Figure 2). A separate correlation dia-gram is constructed for each combination of numbers of teeth (Z1 and Z2). If the transmission is not subjected to unusual conditions, then x1 and x2 are selected in the area of permissible values according to general recommendations, taking into ac-count improvement of all properties of the system (all-purpose gear shaving systems). In cases of special requirements, such as high breaking strength of the teeth, x1 and x2 are selected in order to satisfy these requirements to the greatest degree possible (special gear shaving systems). 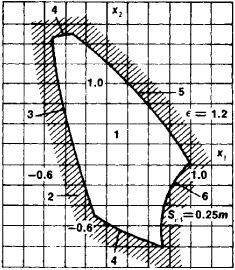