a metal-cutting machine tool for cutting gears, worm gears, and gear racks. Depending on the tool used, a distinction is made among gear-milling machines, gear shapers, gear planets, and finishing machines (shaving, grinding, honing, lapping, generating, and chamfering).

A gear-cutting machine is used to rough out and finish gear teeth, to fit gears, and to fine finish and round off the butt ends of gear teeth.

Gear-milling machines are used to make spur, helical, and herringbone gears, as well as worm gears. Vertical gear-milling machines, which are made either with movable table and stationary stand or with movable stand and stationary table, are the most common in industry. During the cutting of gears, the blank is firmly fastened to a dividing worm gear, which is rotated by a dividing worm connected to a hob cutter by interchangeable gears. The ratio of the speed of rotation of the hob cutter to that of the blank is determined by the gear ratio of the interchangeable gears selected.

The most widely used machines are gear-milling machines that cut gears with a modulus of 0.05-10.0 mm and a diameter of 2-750 mm. 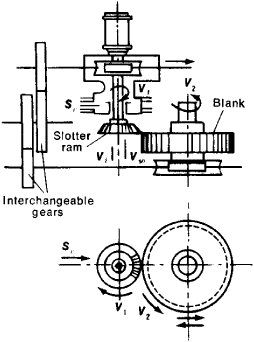 Figure 1. Schematic diagram of the operation of a vertical gear shaper

widely used in industry. The cutting tool is a slotter ram that moves reciprocally parallel to the axis of the blank. The main (working) movement is Vw; there is no cutting on the return (idle) stroke Vp. The motion of the rotary feed Sr imparts a rotary motion to both the shaper-cutter and the blank in directions V1 and V2, so that they rotate as two gears would rotate if engaged. For this purpose the slotter ram and the blank are connected by a rigid kinematic chain with inter-changeable gears and a reversing device, When teeth are being shaped for external gearing the direction of rotation of the ram is opposite to that of the blank (as shown in Figure 1); when teeth are being shaped for internal gearing, the directions coincide. Herringbone gears are usually cut on horizontal gear shapers by alternately operating rams for right-hand and left-hand helical teeth. The most widespread gear shapers are for cutting gear teeth with moduli of 0.2-6.0 mm and diameters of 15-500 mm, and for cutting gears with moduli of 8-12 mm and diameters of 800-1,600 mm. The tracing method consists in the simultaneous slotting of all of the depressions of a gear by forming heads (Figure 2). The heads 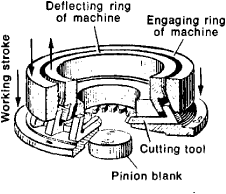 Figure 2. Cutting of gear teeth with a forming head

operate on the principle that forming tools, the number of which corresponds to the number of depressions (teeth) in the gear being made, are fastened to a head and simultaneously (in a single stroke) shape all the depressions, after which a deflecting ring removes the cutting tools.

Gear planets produce bevel gears with spur teeth by generation with one or, more often, two cutting tools. In such machines the gear being cut is meshed with an imaginary flat producing gear; in the process two teeth of the producing gear constitute a gear-cutting tool, which performs a reciprocal motion. Thus, the side surfaces of each tooth of the gear being cut are formed by movement of the cutting tools and the engagement of the flat gear and the gear being cut. The gear-cutting process occurs as the cutters move toward the apex of the cone of the blank, and the return stroke is idle (in this period the cutters move away from the blank). Bevel gears with round teeth are cut by generating on special machines with a gear-cutting head consisting of a disk with cutters mounted on its rim. The cutters shape the tooth from two sides (the first half of the cutting tools shapes one side; the second half shapes the other side). The most common gear planets are those for cutting bevel gears with moduli of 2.5-25 mm and teeth 20-285 mm, for rough cutting and finishing work on large spur-tooth bevel gears with moduli up to 16 mm, and for rough cutting and finishing bevel gears with helical teeth and moduli up to 25 mm.

Gear-tooth shaving is done on gear-shaving machines. It is based on the slipping in opposite directions of the gear teeth of the machine tool and the gear being cut (Figure 3). There 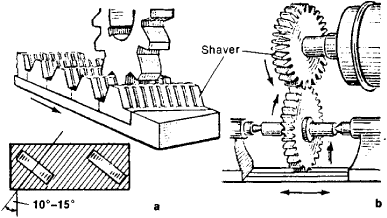 Figure 3. Diagrams of shaving of spur gears: (a) with rack shaver, (b) with disk shaver

are three methods of gear shaving, which differ according to the direction of feed: parallel, diagonal, and tangential. The tool is a disk, rack, or worm shaver. The first two types are used for cutting spur gears; and the last is used for making worm gears.

Gear-grinding machines produce gears by generation and profile tracing using a profile grinding disk (Figure 4,a). Depending on the process, a distinction is made between gear-grinding machines with vertical and horizontal placement of the gear being cut. The gearing of a gear-rack pair (Figure 4, b and c), in which the cutting tool is a grinding wheel (or wheels) that duplicates the rack, is reproduced in the grinding of gears by generation. The grinding wheels rotate and reciprocate; the latter motion is analogous to the imaginary producing rack. As the grinding wheels roll over the gear being cut, which is being rotated (in two directions), their butt ends grind the surfaces of the gear teeth. Machines using an abrasive worm as a cutting tool also operate by generation (Figure 4,d).

Gear-honing machines produce spur and helical gears with moduli of 1.25-6.0 mm, as well as gears with flanked or barrel-shaped teeth to reduce the surface roughness of the tooth profile. Gears are honed on a machine that is similar to a shaving machine, with crossing axes of the cutting tool (the gear hone) and the gear being worked but without a radial feed mechanism. The gear, which is mounted on the journals of the machine, performs not only rotary motion (which is reversible) but also reciprocal motion along its own axis. The gear hone is a plastic gear with a helicoid profile and loaded with an abrasive powder whose grain size is selected according to the size of the allowance (0.025-0.05 mm) and the surface roughness requirements. Gear honing is achieved by constant pressure between the hone and the teeth of the gear being cut (“thrust honing”) or by engaging them without clearance at a fixed center distance. The first method yields gears with greater precision. Abundant cooling and efficient removal of metallic dust from the surface being worked are essential for gear honing.

Gears are lapped on gear-lapping machines after they have undergone heat treatment. The cutting tools are laps, which are cast-iron gears engaged with the gear being worked. The laps are lubricated with a mixture of fine abrasive powder and oil. The gear being worked (Figure 5) is rolled by three laps. 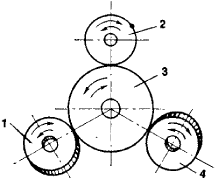 Gear-generating machines produce untempered gears in an oil medium without an abrasive powder. The gear being cut is worked in tandem with one or more tempered standard gears, which have been made with a high degree of precision. The pressure of the teeth of the standard gears during the generating process, as well as the surface work hardening that takes place during the process on teeth being formed, smoothes out uneven areas. This method of finishing is applicable only to gears that do not require high precision and are not subjected to heat treatment.

Gear-chamfering machines form teeth with a cone-type end mill that rotates and moves reciprocally. During one double stroke of the milling cutter, the gear turns one angle step. The tool is moved along the gear (Figure 6) by a rotating 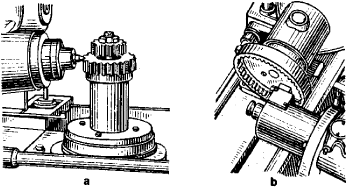 Figure 6. Diagram of chamfering of external (a) and internal (b) gear teeth

toe cam. Such machines chamfer spur and helical gear teeth with external or internal teeth and with diameters up to 320 mm, and also remove flash from the ends of teeth after they have been cut. During operation, the axis of the tool is in a vertical position and the blank is inclined toward the axis at an angle of 30°-45°. The machine operates in an automatic cycle: rapid approach of the tool to the blank, working feed, and return of the tool to its original position. The blank is fastened to a mount on a chuck.

Feedback
Flashcards & Bookmarks ?
Please log in or register to use Flashcards and Bookmarks. You can also log in with
Flashcards ?
My bookmarks ?
+ Add current page to bookmarks
Mentioned in ?
References in periodicals archive ?
The Obamas' list of borrowed items also includes an intriguing trio of patent models on loan from the National Museum of American History, including models for Samuel Morse's 1849 telegraph register, a gear-cutting machine and a paddlewheel for a steamboat.Aa
Cultural revolution arrives at Obama's White House
Hofler GmbH finalized the sale of what it claims is the largest gear-cutting machine ever built.
Quality of life: IMTS shows metalworking evolution--down to the micron
In 1867 at the Paris Exhibition, he introduced the first modern automatic gear-cutting machine with a concentric ground milling cutter.
Gear hero
The exports cover a broad spectrum of technologies, focusing principally on gear-cutting machines, machining centres, laser machines, grinding, honing, lapping and polishing machines, milling machines, lathes and presses."The importance of the Korean market is rising steadily, since industrialisation is progressing significantly in all areas.
VDW Symposium Showcases German Machine Tool Industry's Capabilities
He was a firm believer in the use of automatic machine tools, like the automatic gear-cutting machines which could turn out eight gear-wheels at once.
Dog Cart to sell for pounds 120,000 at auction
Pratt patented milling and gear-cutting machines and, together with Amos Whitney, created an engine manufacturing company that remains in business today.
The true harnessing of steam: a club of professional men in New York City became America's mechanical brain trust
Since 1997, when Gleason gave its Phoenix line of bevel gear-cutting machines the flexibility to cut wet or dry, using advanced carbide tools, nearly 90 percent of Phoenix machines shipped have been running dry.
The Phoenix--rises, again: gearcutting goes dry, compact and ergonomic. (Manufacturing Update)
The LCV 40's rotary double-work spindles indeed represent an unprecedented machine design as far as gear-cutting machines are concerned.
High speed, dry gear hobbing
The average age of all of its gear-cutting machines is less than four years.
Hobbing machine ensures shop accuracy