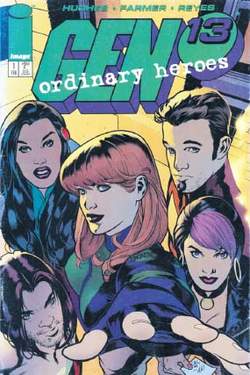 Often seen as the slacker heroes of the Wild-Storm universe, Gen 13 are a group of teenage superheroes who have Gen-Active powers. Created in the Project Genesis program, a part of the secret government group known as International Operations (I.O.), the teens escape an uncertain future to live as a surrogate family for each other, all while fighting aliens and criminals such as Ivana, the Keepers, Bliss, and Threshold. The Gen 13 team is mentored by an ex-operative for the government, John Lynch, a man with mysterious powers and a shady past. The team lives at his La Jolla, California, home, where he has an android maid named Anna. Eventually, Lynch is revealed as team member Burnout’s father. Others in the group include Fairchild, Rainmaker, Freefall, and Grunge.

Fairchild is Caitlin Fairchild, a very tall college student who developed superstrength and an extremely dense body while at Project Genesis. After she helped the others escape, Fairchild became the de facto leader of the group. The Amazon-like Fairchild is rarely able to stay dressed, as her clothes are constantly being shredded, vaporized, or otherwise destroyed.

Burnout is Bobby Lane, a sullen high-schooler who is inducted into Project Genesis, gaining the power to generate heat and plasma fire blasts, and to fly. Sarah Rainmaker uses her last name as her code name, and is an Apache who first discovered her powers while on the San Carlos Reservation. Rainmaker is able to fly and control the weather, and uses ampli-bands on her forearms to direct lightning strikes at her opponents. She is openly bisexual.

Freefall is Roxanne Spaulding, a girl who tries to cultivate a “bad girl” image, and who is romantically linked with Grunge. She has the power to levitate herself or almost any mass, thus negating gravity. Grunge is Percival Edmund “Eddy” Chang, a muscular, immature youngster with a taste for skateboards, surfing, pizza, tattoos, and women. Stronger than average humans, he also has the ability to assimilate properties from anything he touches—steel, water, concrete—and become a living version of that property. He is sometimes able to transform into other people as well, has a photographic memory, and knows multiple forms of the martial arts. His roving eye for romance doesn’t sit well with Freefall.

Fairchild, Burnout, and Freefall first appeared in Deathmate #2 (a.k.a. Deathmate Black, September 1993), an inter-company crossover between Image Comics and Valiant Comics. Rainmaker appeared in Stormwatch #8 (1994), while Grunge made his debut in Gen 13 #1 (February 1994), the first of a five-issue miniseries from Image imprint WildStorm. Drawn by fan favorites J. Scott Campbell and Jim Lee, and written by Brandon Choi, Gen 13 was given a regular series starting in March 1995, and a second series, Gen 13 Bootleg, ran twenty issues (plus an annual) from November 1996 to July 1998. The series were very popular not only because of the kinetic art and humorous stories, but also because the book was laden with cheesecake and beefcake; the hormones of the characters rivaled any soap opera stud or vixen, and thongs and shorts seemed acceptable crime-fighting apparel.

In addition to the two regular Gen 13 series, there were almost twenty one-shot issues and almost as many miniseries. Gen 13 became one of the hottest properties for WildStorm, leading to crossover stories with Fantastic Four and Generation X (Marvel), Monkeyman & O’Brien (Dark Horse), Superman (DC), and The Maxx (Image). A planned and partially completed crossover with Batman (DC) never appeared. Spin-offs such as Gen 12 and Gen-Active also appeared. Besides spin-offs, Gen 13 was infamous not just for its cheesecake covers, but also for its alternate ones; issue #1 of the second series would have fifteen different covers total, and it wasn’t rare for other issues to have at last one alternate cover and sometimes more.

When WildStorm Studios was bought by DC Comics in 1999, Gen 13 moved under the DC/WildStorm publishing umbrella with issue #37 (1999). The popularity of the series began to wane—critics often blamed overexposure—and Gen 13 was finally canceled with issue #77 (July 2002). In that final issue, it appeared that the original teen heroes were dead.

Gen 13 was relaunched with issue #0 (September 2002), written by past X-Men author Chris Claremont. Several new multicultural teens showed up to fight evil—Dylan York, Ethan York, Gwen Matsura, Ja’nelle Moorhead, Hamza Rashad—with some of them having gotten their Gen-Active powers from the mysterious Herod. The new team faced villains such as the Triad, Purple Haze, Chrome, and G-Nome. Predictably, Caitlin Fairchild returned, signaling the eventual return of her other previous teammates. By the time the series ended (again), the original Gen 13 team was reinstated. The final issue for this run was #16 (February 2004). The series was rebooted in 2006, revising the origins of the team’s characters.

Over the years, assorted Gen 13 action figures and models have been released, as well as three novels. In 1998, an eighty-minute Gen 13 animated feature film was written and directed by Kevin Altieri. An all-star cast recorded voices, including Alicia Witt (Fairchild), John de Lancie (Colonel Lynch), Elizabeth Daily (Freefall), musician Flea (Grunge), Mark Hamill (Threshold), and Cloris Leachman (Helga). The PG-13-rated film was never released in the United States by Hollywood Pictures (an arm of Disney), though it was shown at some comic book conventions, and released direct-to-video in England, Australia, Germany, Hungary, Iceland, Brazil, and other countries. A live-action Gen 13 film, slated to be produced by Courtney Solomon, went through several script drafts before being mothballed at Disney. —AM