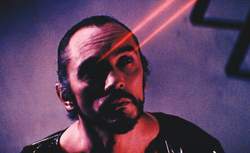 (pop culture)
“You will bow down before me, Jor-El! Both you and then one day, your heir!” swears powermad seditionist General Zod (Terence Stamp) in Superman: The Movie (1978) as he and his fellow black-leather-clad insurrectionists are sentenced by Kryptonian scientist Jor-El to an eternity in the otherworldly prison called the Phantom Zone. In Superman II (1980), a vindictive Zod and his subordinates Ursa and Non are accidentally freed years later by a nuclear explosion in space. Arriving on Earth, which they first believe to be “Planet Houston” after an ill-fated (for the astronauts) encounter with a moon-walking NASA crew, these cold-hearted conquerors from Krypton—with the same powers as Superman—plow over cities and armies, and even humble the president of the United States before Superman, canoodling with Lois Lane at his arctic Fortress of Solitude during Zod's siege, returns to save the day. Stamp's General Zod demanded that his subjects kneel and swear eternal allegiance, but even that offered no guarantee that this aspirant deity would not kill them. “It's a joy to play a two-dimensional character for a change,” the actor beamed in a Superman II promotional interview, surveying Zod as “brutal, vicious, evil, and corrupt, without any redeeming qualities.” Stamp's tour de force was supported by merchandising including action figures of varying sizes from manufacturer Mego. Decades later, his General Zod remains one of cinema's definitive supervillain performances. General Zod did not originate in the movies, but instead in Adventure Comics #283 (1961), in writer Robert Bernstein and artist George Papp's Superboy story that introduced the Phantom Zone to the pages of DC Comics. Originally a Kryptonian army officer/scientist, the egomaniacal Zod, in his purple military uniform and cap, created a militia of Bizarro-like imperfect duplicates in his image and attempted to become the planet's dictator, earning him a one-way ticket to the Zone. He continued to appear in Superboy, Superman, and Supergirl tales until the mid-1980s, usually “seen” in his wraithlike state, conspiring with other Zone prisoners and occasionally breaking free of the ethereal realm to wreak havoc with his superpowers. Once writer/artist John Byrne rebooted Superman in the 1986 miniseries The Man of Steel, this version of Zod was retconned into the “Pocket Universe,” an alternate timeline shaped by the villainous Time Trapper (but actually created by DC to address continuity inconsistencies between the pre– and post–Man of Steel stories involving Superboy and the Legion of Super-Heroes). In a tip of the general's cap to Superman II, Zod and fellow fiends Quex-Ul and Zaora escaped from the Phantom Zone for a murder spree until being executed by Superman with green kryptonite in the shocking Superman vol. 2 #22 (1988). Since then, General Zod has resurfaced in different incarnations. In 2001's “Return to Krypton” storyline, Superman and Lois Lane used the Phantom Zone to travel back in time to the Man of Steel's homeworld, where they met a version of Zod who perished under the collapse of his own machinations. A crimson-cloaked oppressor with abilities similar to Superman's appeared in Action Comics #779 (2001), a cold-war baby named Avruskin born to celestially irradiated Soviet cosmonauts. To Superman's surprise, the revengeful life essence of the Pocket Universe Zod had possessed Avruskin, and this new General Zod made life difficult for the hero before dying while fighting him. Fan-favorite writer/artist team Brian Azzarello and Jim Lee's best-selling “For Tomorrow” Superman story arc (2004–2005) unveiled yet another Zod, an ebon-armored refugee from “Metropia,” a reality within the Phantom Zone that Superman created as a potential safe haven for his loved ones. Wrestling with the perils he unleashed, the Man of Steel was assaulted physically and psychologically by the diabolical Zod, who laughed at Superman as he refused his helpful hand and slipped into a dimensional rift, apparently to his doom. Superman suspects what his fans know: that as long as there is a Man of Steel, he will have little rest from his rancorous Kryptonian foe. The 2005 season premiere of television's Smallville (2001–present) proves this to be true: two unnamed Kryptonian supervillains were described as “disciples of Zod,” revealing Zod's existence in Smallville's continuity.
The Supervillain Book: The Evil Side of Comics and Hollywood © 2006 Visible Ink Press®. All rights reserved.