diagrams showing the relative position of interlinked hereditary factors or genes. These maps reflect the actual linear arrangement of the genes in the chromosomes and are important both in theoretical studies and in breeding work because they permit pairs of characters to be deliberately chosen in crossings. They are also of value in forecasting the nature of the inheritance and expression of various characters in organisms under study.

With the aid of genetic maps of chromosomes one can follow the transmission to offspring of genes responsible for the formation of characters that are difficult to analyze; this is done by following the inheritance of a “signal” gene that is closely linked to the gene being studied. For example, the gene responsible for wrinkled endosperm in corn is located in the ninth chromosome, where it is linked to the gene responsible for the low viability of the plant. Many facts bearing on the absence (contrary to Mendel’s law) of independent assortment of characters in second generation hybrids were explained by the chromosome theory of heredity. The genes located in one chromosome are inherited together in most cases, and they form a single linkage group the number of which is therefore equal in each organism to the haploid number of chromosomes. The American geneticist T. H. Morgan showed, however, that the linkage of genes located in a single chromosome is not absolute in diploid organisms. In some cases there is an exchange of corresponding segments between homologous chromosomes before the gametes are formed, a process called crossing over. The probability that segments of chromosomes (with their genes) will be exchanged varies depending on the distance between them. (The further apart the genes, the greater the probability of crossing over and, consequently, recombination.) Genetic analysis is cf value in detecting crossing over only when the homologous chromosomes differ in composition of the genes, which results in the appearance of new gene combinations after crossing over. The distance between genes on a chromosome map is usually expressed as a percentage of crossing over (ratio of the number of mutant individuals differing from the parents in their combination of genes to the total number of individuals studied). The unit of this distance, a morganid, is equal to a 1 percent frequency of crossing over. 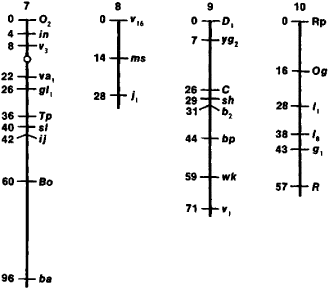 Figure 1. Genetic maps of the seventh through tenth chromosomes of corn. The figures along the length of the chromosomes indicate the distance from the end of the chromosome in morganids. The letters are abbreviations of the characters determined by the corresponding genes.

Bacteria, which are haploid organisms, have one usually continuous ring-shaped chromosome, and all the genes form a single linkage group. During the transfer of genetic material from a donor cell to a recipient cell—for example, in conjugation—the ring-shaped chromosome breaks and the resulting linear structure is transferred from one bacterial cell to another (in 110 to 120 minutes in the colon bacillus). By artificially interrupting the conjugation process, one can determine from the types of recombinants appearing which genes managed to reach the recipient cell. This is one of the methods of constructing genetic maps of bacterial chromosomes that have been worked out in detail for several species. The genetic maps of some bacteriophage chromosomes are even more detailed.