maps representing the geological structure of some segment of the upper part of the earth’s crust. They are compiled from data obtained by means of geological surveying. They can also be made by processing materials accumulated in the course of geological research. Geological maps enable us to draw conclusions about the structure and development of the earth’s crust and the laws governing the distribution of minerals. They are used in planning exploratory and analytic work and in conducting geological engineering studies, construction work, and investigations dealing with water supply and land reclamation.

The most important of these are geological maps proper (see the sample map on the insert facing page 257 in Bol’shaia Sovetskaia Entsiklopediia). These depict the age, composition, and origin of rocks, as well as the conditions of the occurrence of rocks and the nature of the borders between particular complexes, by means of a qualitative background (color and hatching) and letter, number, and other standard symbols. The color background serves to indicate the age of sedimentary, igneous, and metamorphic rocks. Hatching is used to show the composition of the rocks. Intrusive rocks and certain igneous rocks whose composition is conventionally depicted by color or letters are, however, an exception. There are also monochromatic geological maps showing both the composition of rocks and their age by hatching. All standard designations with their explanations are put in the map’s table of standard designations (its legend). The insert referred to above provides an example of the general color legend and the indexing of geological formations as recommended by the instructions on compiling and preparing for publication the USSR State Geological Map (published in 1969; scale, 1:200,000). These instructions make certain changes in the letter designations adopted earlier. Thus, new designations have been introduced in place of the indexes Pg (Paleogene), Cr (Cretaceous), Cm (Cambrian), Pt (Proterozoic), and A (Archean).

Horizontally occurring layers are depicted most simply on geological maps. The borders between layers are at an equal elevation, and their drawing on the map repeats the curves of the relief horizontals (see Figure 1). Where layers occur on a slope it becomes more difficult to depict them because the shape of their outcropping depends on the inclination of the 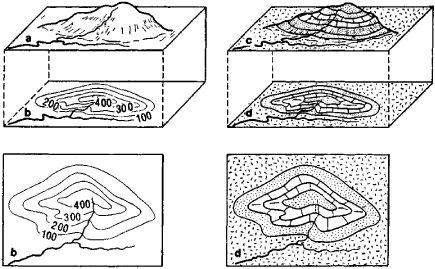 rocks and on the unevenness of the topography. The borders between layers on the map assume the form of winding lines that intersect horizontals (see Figure 2). Folded shapes of the bedding of rocks are designated on geological maps in the form of winding and closed contours. In this case anticlines are expressed by outcrops in the center of ancient layers, and synclines are expressed in the center of younger ones (see 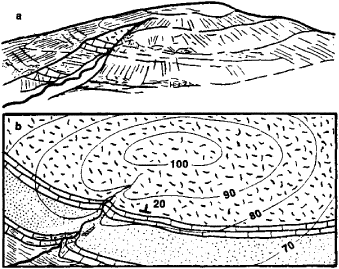 Figure 2. (a) Overall view of a series of layers occurring on a slope and (b) representation of the layers on a geological map

Figure 3). Broken dislocations, such as faults, upthrusts, and overthrusts, are depicted on geological maps by a sharp shift of geological borders and by direct contact between strata of different ages along the joining surfaces (see Figure 4). Deep-lying crystalline rocks, such as granites and gabbro, forming intrusive bodies (batholiths, laccoliths, stocks) usually cut through contacts between layers of the strata containing them. The relationships in the bedding of intrusive and enclosing rocks are easily revealed on geological maps.

Geological maps of Anthropogenic (Quaternary) deposits reflect the distribution, age, composition, thickness, and origin of rocks of the Quaternary age. They show the borders of different stages of glaciation, sea transgressions and regressions, and the borders of the distribution of perennially frozen rocks. On geological maps proper, rocks of the Anthropogenic (Quaternary) age are preserved in those cases when they have their origin in seas or when they include mineral deposits (for example, placer gold and tin), as well as when their thickness is considerable and it proves extremely difficult to reconstruct the structure of the bedrock lying beneath the cover of loose deposits.

Lithologic maps serve to depict (usually by means of hatching) the composition and conditions of occurrence of rocks exposed on the surface or concealed under a cover of Quaternary beds.

Paleogeographic maps are constructed for a certain segment of time in geological history. They show the distribution of land and sea and indicate the composition of sediments or facies and their thicknesses. 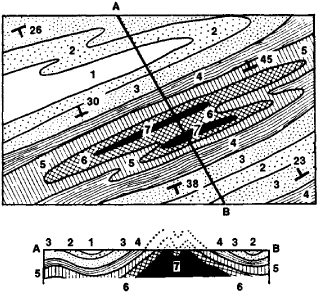 Figure 3. A geological map depicting a folded structure, from (1) the youngest layers (in the center of the syncline) to (7) the oldest layers (in the nucleus of the antisyncline); below is a cross section along line AB

Geological engineering maps show, in addition to data on the age and composition of rocks, their physical properties—porosity, permeability, strength, and the like. They thus provide data necessary for planning projects.

Maps of minerals are compiled on a geological base on which signs and colors are used to show the groups of minerals (fuel, metallic, nonmetallic) and the particular types of mineral raw materials distributed over a given area. For each type of mineral the industrial and nonindustrial deposits and manifestations are distinguished. All direct and indirect signs of minerals are also included on the maps.

Prognostic maps reflect the laws of distribution of different types of mineral raw materials or their complexes. They are compiled on a geological base and offer a prospective assessment of elements of the geological structure of particular regions in reference to useful minerals. Taking into account the geological and economic conditions of each sector, these 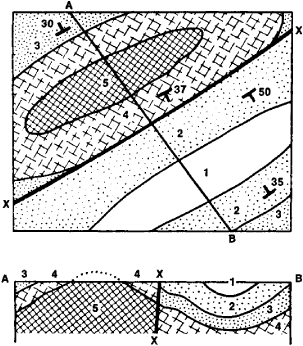 Figure 4. A fold broken by a fault, X-X, from (1) the youngest layers to (5) the oldest layers; below is a cross section along line AB

maps reflect the degree to which deposits in sectors recommended for more detailed exploratory and analytic work have been substantiated and are reliable.

Feedback
Flashcards & Bookmarks ?
Please log in or register to use Flashcards and Bookmarks. You can also log in with
Flashcards ?
My bookmarks ?
+ Add current page to bookmarks
Mentioned in ?
References in periodicals archive ?
Data compilation, being the first step involved the incorporation of previous published data of GSP in the form of geological maps, mineral maps, reports etc., data rectification is further performed in which the incorporated data is rectified using GIS and remote sensing techniques.
STATUS OF GEOLOGICAL MAPPING IN PAKISTAN ### MINERAL MAP OF PAKISTAN; A TRANSFORMATION FROM PICTORIAL REPRESENTATION TO GEODATABASE MANAGEMENT
The efficient interpretation of geophysical data requires the knowledge and appropriate use of geological information, especially information represented on geological maps. Magnetometry is a geophysical method usually used in regional geological studies.
Interpretation of aeromagnetic data using GIS to evaluate the geotectonic regime of the Sabinas Basin./Interpretacion de datos aeromagneticos usando SIG para evaluar el regimen geotectonico de la Cuenca de Sabinas
Tribune News Network - Doha T HE first phase of the Geological Maps project in Qatar has been completed in cooperation with Gannett Fleming Company and the United States Geological Survey.
First phase of Geological Maps project completed
The Ministry of Municipality and Environment has concluded the first phase of geological maps project in co-operation with Gannett Fleming firm and United States Geological Survey.
Geological maps project's phase 1 over
It was decided in the meeting that the geological experts would conduct a survey of Killi Luqman and Killi Jahangir and for the same Google and geological maps would be used.
Pakistani, Afghan military officials meet at Bab-e-Dosti
Martin, Mapping Western Australia: State geological maps 1894-2015
A. Riganti, J.F. Johnston, R.M. Hocking & D.McB. Martin, Mapping Western Australia: State geological maps 1894- 2015
The outcome of the study is expected to provide industry with specifications for a subsequent implementation project, which provide an on-line source of digital geological maps that will summarise current subsurface understanding and the hydrocarbon resources potential within key areas of the UKCS.
Oil & Gas UK commissions SLR Consulting for preliminary phase of 21st Century Exploration Road Map
"We used a computer program to move geological maps of Australia, India and Antarctica back through time and built a 'jigsaw puzzle' of the supercontinent Gondwana.
Jigsaw puzzle of past supercontinent Gondwana solved
Geological maps have been instrumental in the finding and exploitation of the coal, gas, oil and minerals that form the foundation on which our prosperity, health and longevity has been built.
The earth sciences: our legacy and our future