The geometry of light rays and their images, through optical systems. In the modern view of the wave nature of light, geometrical optics as a model is simply wrong. In spite of this geometrical optics is remarkably robust, remaining as a most practical tool in the solution of optical problems where at first glance it would seem to be totally inappropriate. The principal application of geometrical optics remains in the field of optical design.

Light is a form of energy which flows from a source to a receiver. It consists of particles (corpuscles) called photons. The speed with which the particles travel depends on the medium. In a vacuum this speed is 3 × 108 m · s-1(1.86 × 105 mi · s-1) for all colors. In a material medium, whether gas, liquid, or solid, light travels more slowly. Moreover, different colors travel at different rates. The ratio of the speed in a vacuum to the speed in the medium is called the refractive index of the medium. The variation in refractive index with color is called dispersion. See Color, Dispersion (radiation), Refraction of waves

A point source is an infinitesimal region of space which emits photons. An extended source is a dense array of point sources. Each point source emits photons along a family of rays associated with it. For each such family of rays there is also a family of surfaces, each of which is a surface of constant transit time from the source for all the particles, or alternatively, a surface of constant optical path length from the source. These surfaces are called geometrical wavefronts, because they are often good approximations to the wavefronts predicted by a wave theory.

The ray path which any particle takes as it propagates is determined by Fermat's principle, which states that the ray path between any two points in space is that path along which the optical path length is stationary (usually a minimum) among all neighboring paths. In a homogeneous medium (one with a constant refractive index) the ray paths are straight lines.

In a system that consists of a sequence of separately homogeneous media with different refractive indices and with smooth boundaries between them (such as a lens system), the ray paths are straight lines in each medium, but the directions of the ray paths will change in passing through a boundary surface. This change in direction is called refraction, and is governed by Snell's law, which states that the product of the refractive index and the sine of the angle between the normal to the surface and the ray is the same on both sides of a surface separating two media. The normal in question is at the point where the ray intersects the surface.

The primary area of application of geometrical optics is in the analysis and design of image-forming systems. An optical image-forming system consists of one or more optical elements (lenses or mirrors) which when directed at a luminous (light-emitting) object will produce a spatial distribution of the light emerging from it which more or less resembles the object. The latter is called an image. See Optical image

In order to judge the performance of the system, it is first necessary to have a clear idea of what constitutes ideal behavior. Departures from this ideal behavior are called aberrations, and the purpose of optical design is to produce a system in which the aberrations are small enough to be tolerable. See Aberration (optics)

An object line parallel to the axis will have a conjugate line which either intersects the axis in image space or is parallel to it. The first case is called a focal system, and the second an afocal system. 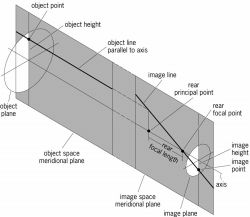 Now take an arbitrary object plane and its conjugate image plane. Select a point off axis in the object plane and construct a line parallel to the axis passing through the off-axis point. The conjugate line in image space will intersect the axis at the rear focal point and the image plane at some off-axis point. The distance of the object point from the axis is called the object height, and the corresponding distance for the image point is the image height. The ratio of the image height to the object height is called the transverse magnification, and is positive or negative according to whether the image point is on the same or the opposite side of the axis relative to the object point.

The focal points and principal points are four of the six gaussian cardinal points. The remaining two are a conjugate pair, also on axis, called the nodal points. They are distinguished by the fact that any conjugate pair of lines passing through them make equal angles with the axis. The function of the cardinal points and their associated planes is to simplify the mapping of the object space into the image space.

Real optical systems cannot obey the laws of the collinear transformation, and departures from this ideal behavior are identified as aberrations. However, if the system is examined in a region restricted to the neighborhood of the axis, the so-called paraxial region, where angles and their sines are indistinguishable from their tangents, a behavior is found which is exactly congruent with the collinear transformation. Paraxial ray tracing can therefore be used to determine the ideal collinear properties of the system.

a branch of optics in which the laws of propagation of light are studied on the basis of concepts of rays of light; a ray of light is taken to be the line of propagation of a flow of light energy. This concept is consistent with reality only to the extent that light diffraction on optical inhomogeneities can be neglected, which is permissible only when the wavelength is much smaller than the dimensions of the inhomogeneities. The laws of geometrical optics make it possible to create a simplified but, in most cases, sufficiently accurate theory of optical systems. For the most part it explains the formation of optical images and makes possible the calculation of aberrations in optical systems, the development of methods for correcting them, and the derivation of the energy relationships for light beams passing through optical systems. At the same time, not all wave phenomena (including diffraction phenomena) that affect the quality of images and determine the resolving power of optical instruments are treated in geometrical optics.

The concept of light rays originated in the science of antiquity. Euclid, by summarizing the achievements of his predecessors, formulated the principle of rectilinear light propagation and the principle of mirror reflection of light. Geometrical optics developed vigorously during the 17th century in connection with the invention of a variety of optical instruments (the terrestrial telescope, the magnifying glass, the telescope, and the microscope) and the beginning of their general use. A major role in this development was played by J. Kepler, R. Descartes, and W. Snell (who discovered Snell’s law of the refraction of light). The construction of theoretical principles until the mid-17th century was completed by the establishment of Fermat’s principle, which asserts that a ray of light passing from one point through several mediums with arbitrary boundaries and varying indexes of refraction arrives at another point in minimum (more accurately, extremal) time. For a homogeneous medium, Fermat’s principle reduces merely to the law of rectilinear propagation of light. The laws of refraction and reflection, which historically were discovered earlier, are also results of this principle, which has played an important role in the development of other branches of physical theory. After 1700 the methods of geometrical optics for calculating optical systems were improved, and they developed as an applied science. After the creation of classical electrodynamics it was shown that the formulas of geometrical optics could be derived from Maxwell’s equations as a limiting case where the wavelength is vanishingly short.

Geometrical optics is an example of a theory that has provided many important practical results from a small number of fundamental concepts and laws (the assumption of light rays and the laws of reflection and refraction). It has retained to the present time great significance in the theory of optical equipment.

[¦jē·ə¦me·trə·kəl ′äp·tiks]
(optics)
The geometry of paths of light rays and their imagery through optical systems.
McGraw-Hill Dictionary of Scientific & Technical Terms, 6E, Copyright © 2003 by The McGraw-Hill Companies, Inc.

Feedback
Flashcards & Bookmarks ?
Please log in or register to use Flashcards and Bookmarks. You can also log in with
Flashcards ?
My bookmarks ?
+ Add current page to bookmarks
Mentioned in ?
References in periodicals archive ?
Fuki, "Waves in weakly anisotropic 3D inhomogeneous media: quasi-isotropic approximation of geometrical optics," Physics-Uspekhi, vol.
Scientific review on the ionospheric absorption and research prospects of a complex eikonal model for one-layer ionosphere
Formal approximation of geometrical optics or WKBJ approximation cannot be applied near the caustic, that is because rays merge together in that area, after they were reflected by caustic.
Fundamental problems of internal gravity waves dynamics in ocean
Nearly no dependence of reflectance on the pyramid size could be explained by ray-tracing in the geometrical optics regime when the surface features are much larger than the wavelength.
Formation of various pyramidal structures on monocrystalline silicon surface and their influence on the solar cells
It is, I suggest, against a background in which the implications of geometrical optics were increasingly at odds with accepted theory in natural philosophy that the commentators develop a new strategy to insist on their compatibility.
'It makes no difference': optics and natural philosophy in late antiquity
Taoda, "Invisibility cloaking based on geometrical optics for visible light," Journal of the European Optical Society--Rapid Publications, Vol.
A Simple Unidirectional Optical Invisibility Cloak Made of Water
The simplest interaction is specular reflection, which can be easily described using the results derived within the scope of geometrical optics [2].
On the accuracy of asymptotic solutions for tm waves diffracting on an impedance wedge
One of the fundamental axioms of geometrical optics is the principle of reversibility of the optical path of rays [7,8].
Ray tracing methods for correcting chromatic aberrations in imaging systems
The topics include geometrical optics principles, systems of several lenses and thick lenses, aberration polynomials and other high-order aberrations, the computer evaluation of optical systems, diffraction in optical systems, basic optical systems and simple photographic lenses, the human eye and ophthalmic lenses, astronomical telescopes, microscopes, and projection systems.
Handbook of optical design, 3d ed
Since the geometrical optics (GO) approximation is to be used for the physical interpretation of the transmission process in the geometrically lit region, the Debye approximation for Hankel functions is to be employed in the integrands in (8).
Geometrically lit region analysis of the single-ray Debye terms for the transmission of a high frequency plane wave into a double-negative cylinder by the modified Watson transformation and Debye series expansion
A means of getting rid of the most misleading sign convention of geometrical optics has been offered in Bhattacharjee (2002, 2012).
Giving more realistic definitions of trigonometric ratios
He discusses the role of geometrical optics and antenna phase center approximations, and uses J.
Clock synchronization and navigation in the vicinity of the earth
The transmission coefficient [tau] of a diffracting aperture is defined as the radiant flux transmitted into the positive half space, divided by the radiant flux incident upon it in the limit of geometrical optics. Thus, for a plane aperture of area A and normally incident parallel light of unit irradiance,
Optical diffraction in close proximity to plane apertures. III. Modified, self-consistent theory