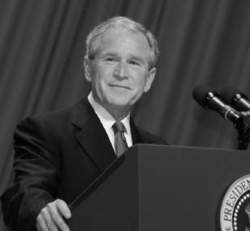 Was President George W. Bush merely carrying out the directions of the New World Order when he invaded Iraq?

Conspiracy theorists maintain that George W. Bush’s invasion of Iraq was not about pursuing a war on terror, but about securing oil fields and obeying the directives of the New World Order.

In March 2004 President George W. Bush prepared a set of slides that he thought would make for a hilarious spoof at the annual dinner of the Radio and Television Correspondents’ Association. The photographs showed him in the Oval Office searching for the weapons of mass destruction that had not been found in Iraq. Bush peered under the desk, behind curtains, looking in vain for the WMDs. As the audience roared in laughter, the president read such captions as, “Those weapons of mass destruction have to be somewhere. Nope, not here. Maybe under here?”

Millions of Americans fail to find anything funny about the grim fact that President Bush led the United States and its allies into war on the basis of “faulty intelligence” about a supposed link between al-Qaeda and Saddam Hussein and about Hussein’s alleged willingness to use weapons of mass destruction on his Middle East enemies unless the United States ousted him. And there is definitely nothing humorous about thousands of Americans in the military services killed or wounded—or the tens of thousands of Iraqis who have died and the thousands of men, women, and children severely wounded.

Conspiracy theorists state that they knew all along that Bush was absolutely correct when he insisted that Hussein had chemical and biological weapons of mass destruction in Iraq—because it was the U.S. government that gave Hussein both the technology and the means to acquire as many WMDs as he thought he needed to maintain his dictatorship. Once Hussein had received those terrible weapons from the U.S., he used them effectively and mercilessly against the Kurds in Iraq’s war with Iran. In the Anfal campaign in the late 1980s, as many as 150,000 Kurds were shot or killed in poison-gas attacks. In March 1988 a chemical weapons attack on the town of Halabja killed an estimated 5,000. To repress a Shiite rebellion in southern Iraq in 1991, Saddam’s elite troops are thought to have killed at least 150,000. In each instance of these mass murders, the U.S. government chose to look the other way.

There are unlikely to be any theorists who doubt that Saddam Hussein was a ruthless, cruel tyrant, a megalomaniacal dictator who believed that he was the reincarnation of Nebuchadnezzar, the king of ancient Babylon (605–562 B.C.E.), or that he committed horrific crimes against the Kurds, Iranians, Kuwaitis, and his own Iraqi people. But it should not be forgotten that when Hussein was committing his most heinous crimes, the U.S. government was supporting him materially and politically.

Many researchers will not be shaken from their belief that George W. Bush’s insistence that the United States go to war with Iraq is all about nothing but oil and that GWB is only following up on the master plan devised by his father, former President George Herbert Walker Bush (GHWB). Here, according to numerous conspiracy theorists, is a timeline of the New World Order of the Bush dynasty and their links with the Saudi royal family and the bin Laden family in the oil business.

1942: The U.S. Congress seizes the Bush family’s banking assets by enforcing the Trading with the Enemy Act. Prescott Bush and his father-in-law George Herbert Walker made their fortunes supplying Nazi Germany and the other Axis nations with money, steel, ships, munitions, and formulas for synthetic gas.

1953: George H. W. Bush (GHWB), a World War II hero and 1948 graduate from Yale in the Skull and Bones fraternity, becomes an owner of Zapata Off-shore Oil, which controls a large fleet of oil tankers off the coast of Kuwait.

1976: GHWB is named director of the CIA by President Gerald Ford. During his tenure Bush works to cement relations with the Saudi royal family, and he privatizes some CIA assets.

GWB’s friend Jim Bath, recruited for the CIA by GHWB, enters into a trust agreement with Salem bin Laden, older brother to Osama, which enables Bath to act as the bin Laden family’s financial representative in the United States. Later, Bath will also represent Khalid bin Mahfouz, a member of Saudi Arabia’s preeminent banking family, owners of the National Commercial Bank, the bank favored by the Saudi royal family.

1987: GWB’s oil companies fail, but Harken Energy, a company that has absorbed them, receives a $25 million stock offering underwritten by Bank of Credit and Commerce International (BCCI), a Middle East banking concern.

1989: As the forty-first president of the United States, GHWB authorizes a top-secret directive that orders closer ties with Iraq and provides $1 billion in new aid for Saddam Hussein. GWB assembles a group of partners who purchase the Texas Rangers baseball franchise.

1990: Bahrain grants exclusive offshore drilling rights to Harken Oil. GWB sells two-thirds of his Harken stock at top dollar for $850,000 but fails to make a report to the Securities Exchange Commission until March 1991. One week after Bush’s coup on the market, Harken stock plummets 60 percent. Bush pays off his bank loan for the Texas Rangers.

In August, with the help of the leaders of Kuwait, Saddam Hussein is tricked into invading that country by GHWB. Zapata Oil’s slant drilling from Kuwait is invading Iraqi territory, and Bush does not want Hussein to control world oil markets. The U.S. ambassador assures Hussein that America is neutral in the battle over oil drilling rights between Iraq and Kuwait. Then, after the invasion, GHWB declares that the world would suffer if all the world’s oil reserves fell into the hands of Saddam Hussein.

GWB is asked to serve on the board of directors of Caterair, a company supported by the Carlyle Group, a powerful investment group with strong ties to the bin Laden family.

1991: GHWB is able to declare the Gulf War under a UN mandate, strengthen the UN, and hike up oil prices. GHWB compares Hussein to Hitler but stops short of toppling the dictator’s regime. Hussein agrees to destroy all chemical and biological weapons.

John Sununu, former aide to the White House chief of staff, leaves the Bush administration to work for BCCI.

George W. Bush spends three nights in a Houston hotel so he can claim Texas residency.

1992: The first of Harken Energy’s wells off Bahrain comes in dry.

GHWB loses the presidential election to Bill Clinton but becomes an adviser to the Carlyle Group and continues his ties to the bin Laden family.

1998: GWB becomes the first governor in Texas history to be elected to consecutive four-year terms.

1999: GWB executes his ninety-ninth prisoner and announces that he will run for president of the United States.

September 11, 2001: The terrible tragedies of the destruction of the World Trade Center in New York City, the attack on the Pentagon, the hijacking of airliners, and the loss of nearly three thousand lives changes America forever.

GHWB is in a business meeting with one of Osama bin Laden’s brothers at the Ritz-Carlton Hotel in Washington when the attacks occur.

Soon after the attacks, GWB and Defense Secretary Donald H. Rumsfeld begin focusing on Iraq and planning an invasion to oust Saddam Hussein.

January 29, 2002: GWB makes his famous “Axis of Evil” speech in which he links Iraq, Iran, and North Korea and suggests that the clouds of war might be forming. Some theorists note that in addition to being “evil,” the three nations mentioned are, interestingly, also great oil producers.

On January 31, 2002, the head of the UN’s International Atomic Energy Agency reports that Iraq has cooperated fully and that there are no weapons of biological and chemical mass destruction.

In March the Bush administration begins to raise publicly the possibility of engaging Iraq. About March 14 Britain’s chief foreign policy adviser, David Manning, meets with U.S. national security adviser Condoleezza Rice, who expresses gratitude for the UK’s support in bringing about regime change in Iraq and assures him that it will be very carefully done.

In late May and early June, U.S. and British forces begin a covert combination of air strikes and raids on Iraq. (The chief Allied air force commander, Lieutenant General Michael Moseley, revealed on June 27, 2005, that between June 2002 and March 2003, before the official declaration of war was made, U.S./British aircraft flew 21,736 sorties over the southern no-fly zone. Moseley reported 600 bombs dropped on 391 targets.)

In July Hans von Sponeck, a UN humanitarian aid coordinator, returns from Iraq and says that all facilities the UN inspectors had previously destroyed are still disabled.

Hans Blix, an expert nuclear weapons analyst, insists there are no WMDs and asks for just one more inspection to prove it.

The New York Times reports that the CIA has no evidence that Iraq has any links to al-Qaeda or any weapons of mass destruction.

2003: GWB authorizes the invasion of Iraq in March. Although the intense bombing raids are called “shock and awe,” the numbers of raids actually decreases after the “coalition of the willing” invades the nation.

In June 2005 Michael Smith, the British reporter who broke the now infamous “Downing Street Leaks” that revealed the grand deception of the U.S. plans to use military force against Iraq over a year before declaring war, stated that he had further learned that on June 8, 2002, roughly one hundred U.S./British aircraft had engaged Iraq’s major western air defense installation. The number of days per month in which allied warplanes attacked installations in Iraq went from six to nine between July and August 2002, then increased to thirteen from December to February 2003.

On October 15, 2005, Richard Norton-Taylor writing in the Guardian (UK), reported that on January 30, 2003, shortly before the invasion of Iraq, Bush told Blair that he intended to go beyond Iraq and target other countries, particularly Saudi Arabia, Iran, and North Korea. According to British international lawyer Philippe Sands, the memo was drawn up after a telephone conversation between the two heads of state by one of the prime minister’s foreign policy advisers in Downing Street and delivered to the Foreign Office.

Conspiracy theorists insist that the war was never about weapons of mass destruction or an Iraqi link to al-Qaeda. The war was not even about regime change or removing Saddam Hussein from power. The United States simply feared that the world’s largest oil reserves would fall into the control of anti-American, militant Islamists. Vice President Dick Cheney once remarked, “You’ve got to go where the oil is.” Under the cover of fighting terrorism, removing an evil dictator from power, and making Iraq safe for democracy, the U.S. government could be viewed as a global savior, instead of an imperialist conqueror.

Noam Chomsky, professor of linguistics at the Massachusetts Institute of Technology, author of Hegemony or Survival: America’s Quest for Global Dominance, commented on July 7, 2005: “If the United States can maintain its control over Iraq, with the world’s second largest known oil reserves that will enhance significantly its strategic power and influence over its major rivals in the tripolar world that has been taking shape for the past 30 years: U.S.-dominated North America, Europe, and Northeast Asia, linked to South and Southeast Asia economies.”

In his June 28, 2005, speech, President George W. Bush tried once again to assure Americans that the invasion of Iraq was the right thing to do as a significant aspect of a “global war against terror.” In reality, many theorists assert, the invasion of Iraq may have significantly increased the threat of terror, for many terrorists from all over the Muslim world have found in harassing the occupation forces in Iraq the perfect training ground for schooling in assassinations, kidnappings, car bombings, and a host of other ghastly techniques.