[¦jē·ō¦sträf·ik ′wind]
(meteorology)
That horizontal wind velocity for which the Coriolis acceleration exactly balances the horizontal pressure force.
McGraw-Hill Dictionary of Scientific & Technical Terms, 6E, Copyright © 2003 by The McGraw-Hill Companies, Inc.
The following article is from The Great Soviet Encyclopedia (1979). It might be outdated or ideologically biased.

a horizontal, even, and straight movement of air with no force of friction and with balance in the gradient of pressure and the deflecting force of the earth’s rotation; the simplest theoretical scheme of air movement of the rotating earth. The actual wind in atmospheric layers higher than 1 km above the earth’s surface is close to the geostrophic wind. The geostrophic wind is directed along the isobar, with an area of low pressure remaining to the left of the stream in the northern hemisphere and to the right in the southern. The velocity of the geostrophic wind is proportional to the magnitude of the horizontal gradient of pressure. With equal gradients it is inversely proportional to the density of the air and the sine of geographic latitude and therefore increases with elevation and with increasing nearness to the equator. 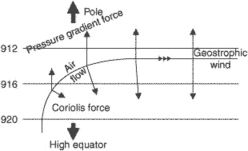