Ghost Rider was adapted to film in 2007. (Columbia/Marvel Entertprises / The Kobal Collection.) 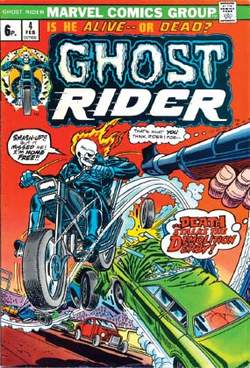 After the enormous superhero boom of the 1960s, the following decade was characterized by a big upswing in horror comics. Marvel Comics responded to this demand with a major line of horror stories, adopting the same sort of continuity and characterization that had made their superhero stories so successful. Only rarely, however, did they combine the two genres to create horror superheroes; the Son of Satan was, despite his name, a genuine hero. However, it was the Ghost Rider who would prove to be by far the most popular of this type of specialty character.

The first Ghost Rider was a macabre Western lawman, inspired by the hit Vaughn Monroe song, “Ghost Riders in the Sky.” He was co-created by writer Ray Krank and artist Dick Ayers in Magazine Enterprises’ Tim Holt #11 (1949). After the trademark expired, writers Roy Thomas and Gary Friedrich, and artist Dick Ayers, created a Marvel version of this character in Ghost Rider #1 (February 1967). This original Ghost Rider was a nineteenth century teacher Carter Slade, who disguised himself in a phosphorescent costume that made him look like a ghost when he fought lawbreakers. This series was not a great success. Somehow, however, the name “Ghost Rider” still hung around.

Marvel editor in chief Roy Thomas, writer Gary Friedrich, and artist Mike Ploog introduced the new motorcycle-riding Ghost Rider in Marvel Spotlight #5 (August 1972). (Friedrich, Ploog and Thomas have publicly disputed over who should be credited as this character’s creator.) With his sleek, blue leather costume, custom-built chopper, and blazing skull for a head, he was one of the most visually arresting characters in comics—though Ploog apparently only signed up for the project thinking that it was going to be a Western strip!

The new Ghost Rider was Johnny Blaze, who had been raised since the death of his father by Crash Simpson, a daredevil stunt rider in the circus (as Blaze’s father had been). Over the years, Blaze, too, learned to be an expert motorcyclist, but his life changed when he found out that Crash was dying of an incurable disease. Naturally, this being the 1970s, Blaze sold his soul to the devil, though at the last minute his half-sister stepped in and at least partially prevented the spell from working. The result was that, as night fell, Johnny Blaze became a living skeleton, possessed with the power of hellfire, which he used to battle evil, faced with the dread prospect that he could go over to the dark side at any time.

Soon, leaving the circus behind, he moved to Hollywood and briefly spent time (with former members of the X-Men) in a superhero team called the Champions, before hitting the road as a drifter. Along with most of Marvel’s horror stars, Ghost Rider fought all types of B-grade villains, including his nemesis the Orb, a motorcycling goon who wore a giant eyeball helmet. After a short run in Marvel Spotlight, the Rider was given his own title in 1973, but by then Ploog had left. By most measures, Ghost Rider was rarely one of Marvel’s better-crafted comics, but somehow it outlasted all the other horror books to run for an incredible ten years. If nothing else, it showed the potency of the horror/superhero/easy rider hybrid and just how far you can go with a character of truly startling appearance.

As the 1980s turned away from horror, Johnny Blaze more or less vanished from sight. Then, out of the blue in 1990, a new Ghost Rider comic appeared with a new star. This incarnation was teenager Danny Ketch, who happened upon the Ghost Rider’s motorcycle in a graveyard and was transformed into another flaming-skulled hero. Much as before, this Rider was soon enjoying enormous popularity and quickly became very much one of the hot characters of the 1990s. The combination of crunching action and the ultimate in teenage alienation (forget acne, imagine how you would feel if you suddenly became a fiery skeleton!) clearly struck a chord with fans.

It was not long before Johnny Blaze himself returned, this time simply called Blaze, and soon both he and Ketch were co-headlining in a second Ghost Rider comic called Spirits of Vengeance. That was followed by another spin-off, Ghost Rider 2099, which starred a futuristic, computer-enhanced version of the hero, potently mixing science fiction and horror. For a while, Ketch and his fellow bikers were everywhere—in spin-offs and one-shots, and guest-starring with classic superheroes such as Captain America, Wolverine, and the Punisher. Sometimes, however, you can have too much of a good thing, and this overexposure disheartened fans and eventually led to the comic’s cancellation in 1998.