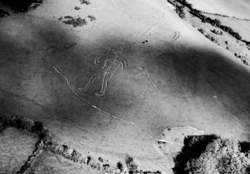 Just who carved this figure into an English hillside is an unsolved mystery, though the picture is clearly some sort of fertility symbol. Legend has it that women who sleep on the site are more likely to become pregnant. Getty Images.

On a hillside in rural Dorset, England, a huge figure 180 feet tall has been cut deeply into the underlying chalk. It is a nude male figure whose most prominent feature is an erect phallus and testicles. He holds a large club, and above his head on the hilltop is a place for maypole dancing.

The origin of the giant is obscure, but the best speculation is that it is a representation of the half-god Hercules. It was possibly cut during the reign of the Roman Emperor Commodus (r. 180–192ce), who thought of himself as the reincarnation of Hercules. As emperor, Commodus dressed like Hercules, including the carrying of a club. Shortly before his death he officially assumed the title of Hercules. If this early origin of the Giant is assumed, it is easy to see the hill above the Giant as the site of fertility rites. It is noteworthy that the people in the area took it upon themselves to keep the giant visible over the centuries, even after Christianity became dominant in the area. Local legends attribute fertility powers to the Giant, and tales circulate in Dorset of women who slept on the figure while seeking to become pregnant.

The Giant is first mentioned in writing in a 1694 note in the books of the local Church of England parish, the first published account being in 1751 in John Hutchins’ Guide to Dorset. Some have suggested that the lack of an earlier mention of the figure means it was cut in the seventeenth century, a high possibility. When pictures began to be published of the Giant, on many occasions the phallus was blanked out.

Ronald Hutton, a historian of British Paganism, has identified the Giant with Denzil Holles, the first Baron Holles (1599–1680), the local lord of the manor. The figure could have been cut by his servants or even as a crude joke on His Lordship.