(gĭl`gəmĕsh), in Babylonian legend, king of UrukUruk
or Erech
, ancient Sumerian city of Mesopotamia, on the Euphrates and NW of Ur (in present-day S Iraq). It is the modern Tall al Warka. Uruk, dating from the 5th millennium B.C., was the largest city in S Mesopotamia and an important religious center.
..... Click the link for more information. . He is the hero of the Gilgamesh epic, written on 12 tablets c.2000 B.C. and discovered among the ruins at NinevehNineveh
, ancient city, capital of the Assyrian Empire, on the Tigris River opposite the site of modern Mosul, Iraq. A shaft dug at Nineveh has yielded a pottery sequence that can be equated with the earliest cultural development in N Mesopotamia.
..... Click the link for more information. . The epic was lost when the library of the Assyrian king AssurbanipalAssurbanipal
or Ashurbanipal
, d. 626? B.C., king of ancient Assyria (669–633 B.C.), son and successor of Esar-Haddon. The last of the great kings of Assyria, he drove Taharka out of Egypt and firmly established Necho in power there only to have Necho's son
..... Click the link for more information.  was destroyed in 612 B.C. The library's remains were excavated by British archaeologists in the mid-19th cent., the tablets were discovered, and the cuneiform text that survived was translated by British scholars. Of some 3,600 lines, 3,200, whole or in part remain.

The epic tells of the adventures of the warlike and imperious Gilgamesh and his friend Enkidu. When Enkidu suddenly sickened and died, Gilgamesh became obsessed by a fear of death. His ancestor Ut-napishtim (who with his wife had been the only survivor of a great flood) told him of a plant that gave eternal life. After obtaining the plant, however, Gilgamesh left it unguarded and a serpent carried it off. The hero then turned to the ghost of Enkidu for consoling knowledge of the afterlife, only to be told by his friend that a gloomy future awaited the dead. 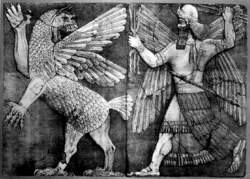 A Babylonian relief of God pursuing the demon Gilgamesh. Reproduced by permission of Fortean Picture Library.

Gilgamesh, asteroid 1,812 (the 1,812th asteroid to be discovered, on September 24, 1960), is approximately 14 kilometers in diameter and has an orbital period of 5.2 years. It was named after the Sumerian hero of the Gilgamesh epic. Gilgamesh was a king of Uruk who, after his best friend died, embarked on an unsuccessful quest for immortality. The asteroid represents an interest in death and physical immortality. The sign and house position of Gilgamesh in a natal chart indicates how this interest manifested. If prominent in a chart (e.g., conjunct the Sun or the ascendant), it may show a person for whom this interest is a major life theme.

Sumerian epic songs about Gilgamesh arose in the third millennium B.C. and have survived to our time. At the turn of the second millennium, a major epic poem on Gilgamesh was created in the Akkadian (Assyro-Babylonian) language. It describes the friendship of Gilgamesh with the wild man Enkidu, Gilgamesh’s despair after his friend’s death, his wanderings in search of the secret of immortality, his visit to his ancestor Utnapishtim, who had survived the flood, and so forth. The Gilgamesh legend was also widespread among the Hetts, Hurrites, Palestinians, and other peoples. The best-known version, from the early first millennium B.C., is from Nineveh.

Humanity made the transition from tribal lifestyles to the more complex forms of social organization we call civilization along four great river basins—in China, India, Egypt, and the Middle East. The Middle Eastern basin, which runs along the Tigris and Euphrates rivers in what is now modern Iraq, hosted a series of sequentially related civilizations that together are referred to as Mesopotamia. It is the oldest of the four early sites of civilization, predating the high culture of Egypt by thousands of years.

The Mesopotamians wrote on clay tablets, many of which have survived to the present. This ancient literature contains, among other compositions, The Epic of Gilgamesh. Humankind’s oldest recorded hero tale (dating from at least 2000 B.C.E.), the epic is built around Gilgamesh’s quest for immortality and is full of dream accounts. A legendary king who ruled the city-state of Uruk around 2600 B.C.E., Gilgamesh was said to be the son of the goddess Ninsun and the king Lugalbanda. His divine heritage on his mother’s side, however, did not exempt him from mortality.

The first part of the epic relates the events leading up to Gilgamesh’s meeting with a man named Enkidu, beginning with Gilgamesh’s dream predicting that he would find a friend whom he would “embrace as a wife.” Because the dream message was expressed in symbols, Gilgamesh sought out his mother, who interpreted the dream for him. Enkidu, who began life as a naked wild man, is eventually tamed and becomes Gilgamesh’s best friend. Together they travel off and slay Humbaba, the giant of the pine forest. On the way to the forest, Gilgamesh has what he feels may be an inauspicious dream, but Enkidu interprets it for him so that it indicates a favorable outcome to their quest.

Gilgamesh triumphs over Humbaba and is so attractive that the goddess of love herself, Ishtar, proposes that she and the young king become lovers. Gilgamesh responds by recounting the bad ends her partners have met and rejects her proposal. Ishtar is so upset that she persuades the Bull of Heaven to come down from the sky and punish Uruk. Gilgamesh and Enkidu, however, make short work of the bull.

Unfortunately, slaying the Bull of Heaven evokes the ire of the gods, who decide that one of the two friends must die as punishment. They choose Enkidu for this unpleasant fate, and he sickens and eventually dies. (Before falling ill, Enkidu has an omen dream in which he learns that he has been chosen to die.) Gilgamesh is distraught by the death of his best friend, but he also begins to consider his own mortality. In Mesopotamian thought, the gods constructed humans out of clay to be their servants on earth. Pragmatists, they did not bother to include an immortal soul as part of the package. What afterlife there was was a pale shadow of earthly life, much like the Jewish Sheol or the early Greek Hades. Before he dies, Enkidu dreams about the other world, and offers the following description: “There is the house whose people sit in darkness: dust is their food and clay their meat. They are clothed like birds with wings for covering, they see no light, they sit in darkness. I entered the house of dust and I saw the kings of the earth, their crowns put away forever….” (Sandars, p. 92—see Sources). Like other cultures that buried the dead in the ground, the Mesopotamians conceived of the otherworld as being a dark, dusty, unpleasant underworld.

With this frightful prospect before him, Gilgamesh resolves to set out on a quest for immortality. He has heard that the mortal man Utnapishtim, the Mesopotamian equivalent of the Bible’s Noah, was granted immortality by the gods. To discover how Utnapishtim obtained such a favor, Gilgamesh undertakes an arduous journey.

When he finally arrives, Utnapishtim relates how the gods, in a fit of anger, destroyed all of humankind in a great flood. Only the wise divinity Ea had the foresight to warn Utnapishtim, who built a great boat in which he and his family survived. The gods quickly realized the error of their ways, but only after the fact. Human beings “feed” the gods, and, without them, celestial beings will starve. Utnapishtim, however, was able to make the appropriate offerings, and the gods were able to eat. Out of gratitude, they granted immortality to him and his wife.

As for Gilgamesh, Utnapishtim requires that, as a test to determine his worthiness for immortality, he stay awake for a week. Gilgamesh promptly fails the test and, instead, sleeps for a week. Good host that he is, however, Utnapishtim gives Gilgamesh a “consolation prize,” namely, a plant with the powers of rejuvenation (the next best thing to immortality). Unfortunately, on the journey back a snake eats the plant, so Gilgamesh arrives home empty-handed.

As reflected in the Gilgamesh, dreams were highly regarded in ancient Mesopotamia as omens of the future. Dreams were also valued as a means by which the dreamer could penetrate other realities, as when Enkidu gets a glance into the afterlife during a dream. And, finally, dreams were utilized in the Gilgamesh as a literary device, foreshadowing events that had not yet occurred.

Feedback
Flashcards & Bookmarks ?
Please log in or register to use Flashcards and Bookmarks. You can also log in with
Flashcards ?
My bookmarks ?
+ Add current page to bookmarks
Mentioned in ?
References in periodicals archive ?
Good Effort is also poorly weighted while VALE OF KENT -- trained by Mark Johnston (above) -- was just behind Gilgamesh here last month.
Kent looks up for the Challenge; VALUE SCOPE; DAVE MITCHELL on the 3.35 at Ascot
The Epic of Gilgamesh as represented by tablets from the "libraries" of first-millennium BCE Mesopotamia is the best known and most accessible to modern readers of all the literature of the ancient Near East, save that of the Hebrew Bible.
Male and Female in the Epic of Gilgamesh: Encounters, Literary History, and Interpretation
BEIRUT: In the Babylonian epic of Gilgamesh, the protagonist, a Sumerian king, journeys to Mount Lebanon, deforests its famed cedar trees and beheads the demigod Humbaba -- guardian of the sacred land.
Lebanon's mountains in a sorry state
FEELING GRATE Gilgamesh is on the mend after treatment
Saved seals make splash
To understand how much this approach is hard wired into the DNA of western politicians, and increasingly most world leaders, Dr Russell-Jones analyses the oldest story in recorded history, The Epic of Gilgamesh.
The epic of Gilgamesh and the plunder of nature
Gilgamesh had improved 13lb before his season was derailed and if he can pick up where he left off, he can become a major all-weather player through the winter months.
Cash in with Part Exchange
Another contender in the famous silks will be George Scott's Gilgamesh in the Britannia Stakes for three-year-olds.
ulysses on course
The 2015 winner of the King Fahd Center for Middle East Studies Translation of Arabic Literature Award, Gilgamesh's Snake is a haunting meditation on the Epic of Gilgamesh and how its themes of upheaval and a search for meaning continue to resonate some four thousand years later.
Ghareeb Iskander: Gilgamesh's Snake and Other Poems
The ninth Asheyyat Tuqoos Al Masraheya festival awarded Mr Shams, from Gilgamesh Theatre, for his role as a waste collector in Al Mazbala Al Fadhela (the esteemed landfill).
Bahraini actor wins major theatre award
Epos o Gilgamesovi, H 351 = The Epic of Gilgamesh, H 351.
The first volumes in the complete Martinu edition
Before those lofty targets can be tackled, Buick is aiming to get back on the board at Nottingham, where the first of his mounts is once-raced maiden Gilgamesh in the opening 6f maiden for in-form George Scott.
Buick returns from suspension at Nottingham