[¦glō ¦dis‚chärj]
(electronics)
A discharge of electricity through gas at relatively low pressure in an electron tube, characterized by several regions of diffuse, luminous glow and a voltage drop in the vicinity of the cathode that is much higher than the ionization voltage of the gas. Also known as cold-cathode discharge.
McGraw-Hill Dictionary of Scientific & Technical Terms, 6E, Copyright © 2003 by The McGraw-Hill Companies, Inc.
The following article is from The Great Soviet Encyclopedia (1979). It might be outdated or ideologically biased.

a type of stable, self-maintained electrical discharge in a gas. A glow discharge occurs at a low cathode temperature and is characterized by a comparatively low current density at the cathode and a high cathode drop U, which may be of the order of a few hundred volts. Although such discharges may occur at gas pressures p as high as atmospheric pressure, most investigations of the glow discharge have been carried out at pressures ranging from a few hundredths of a millimeter to several millimeters of mercury.

In a glow discharge electrons are emitted by the cathode primarily as a result of bombardment by positive ions and fast electrons; the photoelectric effect and the energy of metastable atoms, however, also play a certain role in electron emission. At 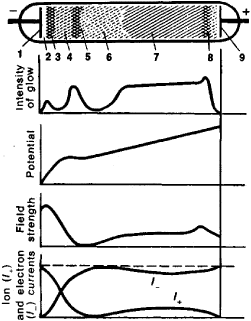 pressures of the order of tenths of a millimeter of mercury or higher, a glow discharge in a long cylindrical tube is typically divided into a number of regions that differ markedly in appearance (Figure 1). The formation of these regions can be explained by reference to the characteristics of the elementary processes of ionization and excitation of atoms and molecules. The most important region, which determines the very existence of the glow discharge under the given conditions, is the cathode dark space. In this region collision ionization by electrons results in the formation of positive ions, which cause the emission of electrons by the cathode.

A special type of glow discharge can be obtained with a hollow cathode (a cathode consisting of a hollow cylinder or two parallel plates). In such a discharge the electrons undergo multiple oscillations between the walls of the cathode and intensely ionize the gas. Hollow-cathode glow discharges exhibit much higher current densities and much brighter glow regions than do ordinary glow discharges.

The properties and characteristics of glow discharges are made use of in technology in, for example, voltage regulator tubes.

An electric discharge in a gas at low pressure which produces a diffuse glow; characterized by a low cathode temperature, a low current density, and a high voltage drop.
McGraw-Hill Dictionary of Architecture and Construction. Copyright © 2003 by McGraw-Hill Companies, Inc.

Feedback
Flashcards & Bookmarks ?
Please log in or register to use Flashcards and Bookmarks. You can also log in with
Flashcards ?
My bookmarks ?
+ Add current page to bookmarks
Mentioned in ?
References in periodicals archive ?
Radiofrequency glow discharge or plasma treatment is another highly recommended technique to enhance wettability of VP.
WETTABILITY AND HYDROPHILLICITY OF VINYL POLYSILOXANE IMPRESSION MATERIAL
et al., "Cathodic Contact Glow Discharge Electrolysis for the Degradation of Liquid Ammonia Solutions," Plasma Processes and Polymers 12(1):25-31, 2015, doi:10.1002/ppap.201400049.
Exploring the Potential of Combustion on Titan
PPTMP thin films were prepared using a capacitively coupled glow discharge system [16].
Thickness Dependence of AC Electrical Conductivity and Dielectric Behavior of Plasma Polymerized 1,1,3, 3-Tetramethoxypropane Thin Films
Karal'Nik et al., "Evolution of the radial structure of a negative corona during its transformation into a glow discharge and a spark," Plasma Physics Reports, vol.
Inactivation of Microbial Food Contamination of Plastic Cups Using Nonthermal Plasma and Hydrogen Peroxide
(2016) have demonstrated the use of x-ray radiography to obtain temporally and spatially-resolved 2D maps of the gas displacement inside the gap of a conventional spark plug, mainly during the glow discharge phase [20].
X-Ray Radiography Measurements of the Thermal Energy in Spark Ignition Plasma at Variable Ambient Conditions
KEYWORDS: DC discharge, Glow discharge regions, Optical emission spectroscopy, Image
Investigation of intensity distribution by image analysis for DC discharge
Carmand, "Collisional--radiative model for the sputtered copper atoms and ions in a direct current argon glow discharge," Spectrochimica Acta Part B: Atomic Spectroscopy, vol.
Computer Simulation of Metal Ions Transport to Uneven Substrates during Ionized Plasma Vapour Deposition
Despite the fact that the influence of the magnetic field on the parameters of the plasma has been studied in the experiment, in theoretical research, there is still not a complete theoretical description of the influence of magnetic field on the parameters of the glow discharge. The relations between the physical quantities and some physical phenomena can not be explained strictly.
DC Glow Discharge in Axial Magnetic Field at Low Pressures
Glow discharge plasma at low pressures is one of the several physical techniques utilized to modify the morphology and properties of polymeric membrane surfaces [1].
Surface Modification of Asymmetric Polysulfone/Polyethylene Glycol Membranes by DC Ar-Glow Discharge Plasma
A low noise DC glow discharge anemometer was designed successfully by Mettler in 1949, and it was applied to measure the 1.6 Ma supersonic flow field and obtained the good effect [7].
Research on the Plasma Anemometer Based on AC Glow Discharge
The Glow Discharge Optical Emission Spectroscopy (GDOES) measurements on PEO oxidized tantalum samples were performed on a Horiba Scientific GD Profiler 2 instrument using radio frequency (RF) asynchronous pulse generator with the following conditions: pressure: 700 Pa, power: 40 W, frequency: 3000 Hz, duty cycle: 0.25, and anode diameter: 4 mm.
XPS and GDOES Characterization of Porous Coating Enriched with Copper and Calcium Obtained on Tantalum via Plasma Electrolytic Oxidation