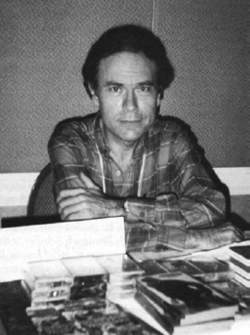 Donald Frank Glut, author and editor of vampire books, was born in Pecos, Texas, the son of Julia and Frank C. Glut. He attended DePaul University for two years (1962–64) and completed his bachelor’s degree (1967) at the University of Southern California. Following his graduation, Glut launched a career as a writer and, during the intervening quarter century, has produced numerous horror titles, especially around the Frankenstein and Dracula themes. Throughout the early 1970s, he authored a series of Frankenstein books including Frankenstein Lives Again (Spanish ed. 1971; English ed. 1977), Terror of Frankenstein (Spanish ed. 1971; English ed. 1977) and The Frankenstein Legend: A Tribute to Mary Shelley and Boris Karloff (1972).

In 1972, Glut produced his first vampire book, True Vampires of History. It proved a landmark volume—the first to bring together the accounts of all real (as opposed to legendary) vampires in what was a historical narrative. He followed in 1975 with The Dracula Book, a monumental bibliographical work on the character of Dracula as he appeared in the different media, such as books, comic books, stage, and film. It was awarded the Montague Summers Award by The Count Dracula Society, and became the foundation of all future vampire bibliographical and movie research. In 1977, Glut brought together his two primary loves in a novel, Frankenstein Meets Dracula (German edition, 1980).

Glut continued his interest in Frankenstein and produced The Frankenstein Catalog (1984), an updated edition of his prior bibliographical work. He also pursued an interest in dinosaurs and has authored a number of titles on that topic, beginning with The Dinosaur Dictionary (1972). In the early 1990s, he began compiling a comprehensive work on dinosaurs. His completed work, Dinosaurs: The Encyclopedia, published in 1997, was named a outstanding reference source by the American Library Association.