; and so on. Glycols containing two OH groups at the same carbon atom—for example, chloral hydrate, CCl3CH(OH)2—are stable only in the presence of strong electronegative groups.

In their chemical properties, glycols resemble the monohydric alcohols in many respects (they form alkoxides, ethers, esters, and other compounds). Depending on the relative arrangement of the OH group in the molecule and on the dehydration conditions, dehydration of glycols may yield carbonyl compounds or cyclic ethers. Thus, ethylene glycol yields acetaldehyde or 1,4-dioxane, whereas 1,4-butane diol yields tetrahydrofuran. 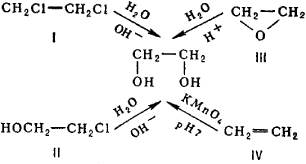 The 1,2-glycols and their derivatives have the greatest practical importance. The esters of higher glycols are used as plasticizers.

Feedback
Flashcards & Bookmarks ?
Please log in or register to use Flashcards and Bookmarks. You can also log in with
Flashcards ?
My bookmarks ?
+ Add current page to bookmarks
Mentioned in ?
References in periodicals archive ?
Glyceryl tribenzoate and pentaerythrityl tetrabenzoate, and neopentyl glycol dibenzoate are typical of the benzoic acid esters.
Plasticizers
The brand managers and packaging engineers who are concerned about the potential effects migrating glycol ethers and residual monomers can have on food products have a new polymer technology at their disposal.
Glycol ether-free polymers: the right path to brand loyalty
Unfortunately, the addition of glycol to water makes the fluid even more corrosive than water.
Longer life for glyco-based stationary engine coolants
Copolymers are readily prepared by melt copolymerization of dimethyl terephthalate, the high molecular weight glycol and excess tetramethylene glycol.
Synthesis and morphology of TPEs
* Polycaprolactone - poly([Epsilon] - caprolactone) glycol.
TPU: the first commercial TPEs
offers Flexol 4GO, which is a secondary PVC plasticizer (glycol ester type) that imparts a low-temperature flexibility and viscosity stability to plastisols.
Plasticizers: product lines reviewed
The Ethylene Glycol production is part of Sasol's US Mega Project, including a 1.5 mmt/year ethane cracker as well as six downstream chemical production units.
Sasol Limited reports launch of marketing agreement with HELM AG
This report discusses a case in which propylene glycol was used to dissolve resveratrol for IP slow bolus administration to rats.
Status Epilepticus due to Intraperitoneal Injection of Vehicle Containing Propylene Glycol in Sprague Dawley Rats
Glycol is fundamental to the smooth operation of any chiller system and if specified incorrectly, it can cause serious issues, including reduced heat transfer and corrosion.
9 tips for getting the most out of your glycol: Brent Hall, technical manager at ICS Cool Energy, offers nine top tips for using glycol in chillers and chilled water systems
Back in the 1950s, Dow Chemical promoted its glycols by highlighting the humectant and softening effect in cigarettes.
1951 Chemistry in Canada, April issue