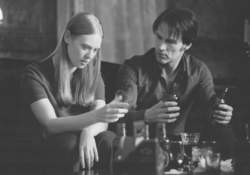 Margaret L. Carter, a scholar of vampire literature, has defined good guy vampires as vampires who act morally when dealing with mortals, and, as a whole, conform their moral perspective to a human ethical perspective. In order to obtain blood without killing or “raping” their victims, they will attempt to acquire it from animals, blood banks, or willing human donors. A few, like Vampirella and Blade, use synthetic blood substitutes. Carter also maintains that the good guy vampires retain personality and freedom of choice, and are not so consumed with blood lust that ethical decisions become impossible. Good guy vampires tend to emerge in one of two situations: either they are basically good people who discover themselves trapped in the evil condition—vampirism—and are forced to continually fight against it, or vampirism is pictured as an ethically neutral state, in which vampires can make ethical decisions on how to find their needed sustenance, blood.

In the 1960s, good guy vampires Vampirella and Barnabas Collins appeared in popular culture, while literary examples of that time include the Dracula of science fiction writer Fred Saberhagen and St. Germain, the hero vampire of the novels of Chelsea Quinn Yarbro. Throughout the 1980s, good guy vampires multiplied in literature and media, but most notably reappeared in the 1990s in the person of Nick Knight, the vampire lead of the television series, Forever Knight. Carter has rightfully pointed out that the good guy vampire is a feature of modern vampire lore that separates it radically from nineteenth-century vampire literature. It is worth noting, however, that the idea of a morally responsible vampire was not really common in twentieth-century literature until after the 1950s. Good guy vampires have been an essential part of the revival of interest in vampires in the 1990s. When in 1992 Mary Ann B. McKinnion announced her intention of starting a fanzine dedicated to good guy vampires, she received encouraging response. For several years she turned out substantial issues annually. Good Guys Wear Fangs featured original short stories and poetry in which the vampire is a hero.

The good guy vampire found its real home in both romantic fiction and teenage fiction. Good guy vampires became the heroes for writers Amanda Ashley, Christine Feehan, and Charlaine Harris, whose books were adapted for the HBO television series True Blood. And then there are the good guy detectives Jack Fleming in P. N. Elrod‘s many books, and Henry Fritzroy in the novels of Tanya Huff. Simultaneously, in the early episodes of Buffy the Vampire Slayer, a good guy vampire, Angel, would be introduced as a romantic love interest of the Slayer. In the teen book series Twilight, a family of good guy vampires, the Cullens, take center stage with narrator Bella Swan as the main protagonists. Good guy vampires have shown up on many television shows, notably the vampires of Vampire High, Nick St. John of Moonlight, the two rival vampires in Laura Smith’s Vampire Diaries, Bill Compton and his vampire friends of True Blood, and a number of animée series from Japanese television. Many of the television vampires were aimed at a youthful audience and many were developed from and/or spawned teenage vampire novels.