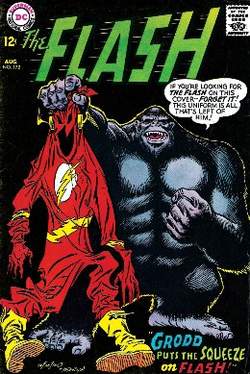 (pop culture)
He is one of the cruelest supervillains in the DC Universe, thirsty for nothing short of world domination. He can discharge destructive psionic bolts, transfer his psyche into the bodies of others, and telepathically compel victims into blind obedience, all with his formidable “Force of Mind.” He is a technological mastermind, the inventor of such insidious devices as the Devolutionizer Ray, and when his vast intellect fails to service him, he is capable of crushing the mightiest of heroes in his bare hands. And he is an ape. Born of an era when DC Comics editors (most notably Julius Schwartz) believed that covers featuring super-intelligent gorillas were tantamount to increased sales, Gorilla Grodd first appeared in The Flash vol. 1 #106 (1959); contrary to editorial wisdom, however, Grodd was not depicted on the cover. In “Menace of the Super-Gorilla!” by writer John Broome and artist Carmine Infantino, a nuclear-powered “all-purpose craft”—capable of achieving remarkable speeds in flight, underwater, on land, and even while burrowing through the earth—arrives in Central City, home of the Silver Age (1956–1969) Flash. Emerging from the uncanny ship is a talking, genius gorilla—Grodd— seeking “the greatest mind in the world.” That mind belongs to fellow primate Solovar, the sovereign of a secret African civilization of scientifically advanced simians, opting to play dumb in a circus cage rather than reveal the existence of his kingdom of Gorilla City. Grodd telepathically usurps Solovar's Force of Mind, intending to use it for conquest, but Flash makes a monkey of Grodd by disorienting him in a superspeed-created whirlwind. Grodd escaped from a Gorilla City prison in the very next issue (#107, 1959), and was not as easily vanquished by the Flash in their second clash but still beaten once the hero repeatedly punched him in the blink of an eye. By his third appearance—in Flash #108 (1959), giving the super-gorilla an impressive three-issue trial run— Grodd was in better control of his Force of Mind, employing the human secret identity of Drew Drowden and uprooting trees as deadly projectiles with his newly honed mind over matter faculty. Gorilla Grodd was a relentless and consistent threat to the Fastest Man Alive, fighting him solo and orchestrating the first union of the Flash's Rogues' Gallery in Flash #155 (1965). Throughout the latter 1970s, Grodd allied with cadres of criminals in Secret Society of Super-Villains (1976–1978) and as one of the Legion of Doom in the animated cartoon Challenge of the Super Friends (1978–1979); during these uneasy alliances, Grodd held his human and alien partners with low regard and worked with them only to further his personal goals. His popularity during the late 1970s inspired DC Comics to plan a comic book titled Grodd of Gorilla City; while the publisher pulled the plug on the title before printing it, the first issue was produced. Over the decades, Grodd's malevolence has thrust him into conflict with other heroes, including Superman, Hawkman, Blue Devil, Supergirl, Martian Manhunter, the Teen Titans, the Birds of Prey, the Outsiders, and, oddly enough, Swamp Thing. While sometimes succumbing to primate puns in story titles (“Gorilla My Dreams,” “Groddspell”), DC Comics writers have, over time, expanded the history of Grodd and Gorilla City. Grodd was married but (not surprisingly) separated, has a son named Gorbzil Mammit, and conflicting reports peg him as either the brother or grandfather of Sam Simeon, the sentient primate cartoonist in DC's offbeat Angel and the Ape series. After numerous attempts at wresting control of Gorilla City from Solovar, Grodd orchestrated a coup in the JLApe: Gorilla Warfare crossover in DC's 1999 annuals. He had Solovar assassinated, transformed the Justice League into gorillas with his “Gorillabomb,” and incited Gorilla City into a war with humans. In the twenty-first century, this super-intelligent simian's bestial side is often displayed, with Grodd even eating his adversaries in the Grant Morrison–penned JLA: Classified #1–#3 (2005). With his balance of sentience and savagery, Gorilla Grodd has evolved from a gimmick-spawned villain into one of the deadliest menaces in the DC Universe. Gorilla Grodd's non-comics appearances include a 2001 action figure and a 2005 Flash-versus- Grodd mini-statue from DC Direct, and appearances on the Cartoon Network's Justice League (2001–2004) and Justice League Unlimited (2004–present), voiced by Powers Boothe.
The Supervillain Book: The Evil Side of Comics and Hollywood © 2006 Visible Ink Press®. All rights reserved.