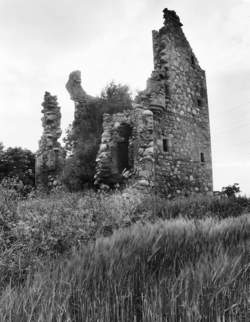 Ruins of Inshoch Castle, Scotland Highlands, where Issobell Gowdie is said to have met the Devil and learned from him the practice of wax image making. Courtesy Fortean Picture Library.

One of the Auldearne coven of witches tried in Morayshire, Scotland, in 1662. Gowdie, young and red-haired, became famous partly because her testimony was so full of details and partly because it was supposedly freely given, without torture. However, as Cameron points out, preliminary torture—which could include being deprived of food and drink, being kept without sleep, and even beatings and having the legs crushed—was frequently ignored by the courts. The recorded torture was only that which was applied at a later stage, to obtain the names of accomplices. Prior to that, the words "The prisoner confessed without torture" would be written into the records. However, Gowdie did tell her story at least four times, between April 13 and May 27, never once deviating, contradicting herself, or altering her testimony in any way, including the recitation of a number of spells and incantations.

Gowdie claimed she had been initiated fifteen years earlier (in 1647) at Auldearne Church in Nairnshire by a man dressed all in gray. Her sponsor was a woman named Margaret Brodie. The man in gray put his "Devil's mark" on her and gave her the eke-name of Janet. From that time forward, she met with twelve other women—a traditional coven of thirteen—on a regular basis, with sabbats taking place every quarter.

The attendant imps, or devils, were of various types and dressed in a variety of colors. Gowdie's was named Reed Reiver and wore black. The use of the wax image was to destroy the male children of the Laird of Park. One of the coven—John Taylor—provided the clay which was worked upon to create a poppet, a figure representing a male child in all details. The witches then laid the poppet in the fire till it baked hard. After that they would roast it each day, concentrating on a particular part each time.

The coven raised storms by beating wet rags against stones and chanting. To blight a farmer's field, they dug up the body of a child from the graveyard and, after sharing parts of it with another neighboring coven, buried pieces in the farmer's compost pile, which worked against the fertility of his fields.

To the authorities, the most shocking part of Gowdie's testimony was her detailed description of sexual rites. Some were the outcome of feasting, dancing, and festivities, but some were of a ritualistic nature. Gowdie made much of the fact that the devil's penis was extremely large and extremely cold, as was his emission. The female leader of the coven—the "Queen" or "Maiden"—was Jean Marten. In that position, she was always the first to enjoy the male leader's sexual favors.

Most authorities say there is no record of the outcome of the trial, although they assume Issobell Gowdie paid the usual penalty, along with her coven mates. Tindall, however, says that Gowdie was hanged at the West Point of Elgin and her body later burned. The ashes were scattered.