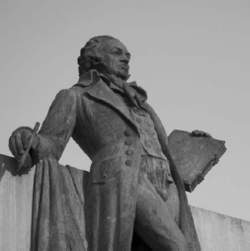 Francisco Goya (1746–1828) began painting decorative tapestries and then moved on to become a professional portrait artist. He lived during a troubled period of European history, surviving Napoleon Bonaparte’s devastating invasion of Spain. The symbolic expressionism of his later work would serve as inspiration for later generations of artists. His depictions of nightmares, violence, and human suffering are considered forerunners of the Romantics of the following century.

Goya is particularly remembered for the nightmarish works of art he produced during the later half of his life. In the painting Saturn Devouring a Son, he shows the god in the midst of an appalling feast. Somehow, Goya manages to convey the deity’s amazement with his own participation in this cannibalistic ritual. His work The Sleep of Reason Produces Monsters is a tribute to the fears of “Reason” that the freeing of the imagination may result in the free reign of the unmanageable aspects of the human psyche. Goya was also known for his depictions of the inmates of a madhouse in Saragossa, Spain, and witches’ sabbaths.

The aspect of Goya’s life that allowed him to realistically portray frightening dreams was the nightmarish quality of his own waking world. He had a habit of “pointing” his brush with his mouth. Over the course of his life, he began to exhibit the symptoms of what we now recognize as lead poisoning. The illness progressed to the point where he was constantly battling intermittent paralysis, deafness, and tremors that affected the paint strokes of his work toward the end of his life.