a hoisting crane whose load-lifting mechanism is a clamshell-like grapple. The grab crane is widely used for loading and unloading at ports, the depots of industrial establishments, construction sites, railroad stations, and elsewhere. 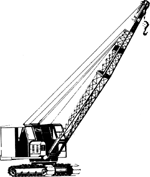 crane
1. A machine for lifting or lowering a load and moving it horizontally, in which the hoisting mechanism is an integral part of the machine; classified by mounting, by boom configuration, and by lifting capacity.
2.See fireplace crane.
McGraw-Hill Dictionary of Architecture and Construction. Copyright © 2003 by McGraw-Hill Companies, Inc.

Feedback
Flashcards & Bookmarks ?
Please log in or register to use Flashcards and Bookmarks. You can also log in with
Flashcards ?
My bookmarks ?
+ Add current page to bookmarks
Mentioned in ?
References in periodicals archive ?
These loads are then transferred to outgoing ships via PHC's grab cranes. The veteran 863, meanwhile, is now operating in ships' holds where it works in conjunction with crane-mounted grabs to unload bulk cargoes of grain and animal feed.
Europe\ s largest natural harbour buys new Bobcat
In addition Emirates Trading Agency based in Dubai ordered four heavy duty grab cranes for each of two panamax transloading stations.
Cargotec's MacGREGOR business area announces record number of ship crane orders in Q1
His uncle placed one of his large hands on the top of his head, held him like one of those grab cranes people try to lift out prizes with at the fair, and tilted his head, making him look up.
MORNING SERIAL