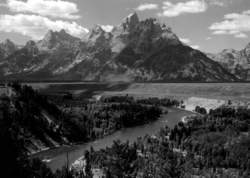 The Grand Teton Mountains in Wyoming took on new religious significance in 1934, when “I AM” leader Guy W. Ballard claimed to have religious experiences there. Time Life Pictures/Getty Images.

The Grand Teton Mountains are a spectacular mountain range in northwest Wyoming, its highest peak reaching over 13,000 feet. They took on religious significance in 1934 when Guy W. Ballard (1878–1939) included accounts of his mystical experiences in the mountain in the first book for a movement that would become known as the “I AM” Religious Activity. According to Ballard, Ascended Master Saint Germain took him to the Tetons, where, at a point never specifically designated, “Saint Germain touched a great boulder. Instantly, the enormous mass tipped out perhaps four feet away from its original position. He motioned me to follow. We entered and, to my astonishment, stood before a large bronze door…. He stepped forward and pressed certain points on the door. The great mass of bronze weighing many tons swung slowly open, and admitted us into a spacious chamber from which a stairway, cut in the solid rock, led downward.” They entered what is known as the Royal Teton Retreat, where they had a meeting with a group of Venusians.

The “I AM” and the several groups that have derived from it, such as the Church Universal and Triumphant, now understand the opening inside the Grand Tetons to be one of the two principal retreat centers in North America for the Great White Brotherhood, the groups of evolved individuals who are believed to guide the course of humanity from age to age. The other main retreat center is in Mount Shasta in Northern California. The Grand Tetons center was established after the sinking of Atlantis.

Those in the “I AM” tradition believe that the Ascended Masters hold major conclaves at the Grand Tetons, especially in early January and July. These conclaves focus the Masters’ work for the continued evolution of humanity. The ancient Chinese teacher Confucius is considered the primary leader of the Grand Teton center.

There are a number of anecdotal tales of believers in the “I AM” story spending time in Jackson Hole and Grand Teton National Park in hopes of making contact with the Masters and being invited into the retreat. However, none since Ballard have reported any significant contact.

Feedback
Flashcards & Bookmarks ?
Please log in or register to use Flashcards and Bookmarks. You can also log in with
Flashcards ?
My bookmarks ?
+ Add current page to bookmarks
Mentioned in ?
References in periodicals archive ?
The pronghorn's 300-mile round-trip journey extends between Wyoming's Upper Green River Basin and Grand Teton National Park.
Pronghorn pilgrims: quick and agile, pronghorns are one of the fastest animals in the world, and they can be found roaming the grasslands of the West
How did the National Elk Refuge and Grand Teton National Park evolve from a safe harbor for the nation's largest remaining herd of elk to a threat to their descendants' survival?
Although Grand Teton encompasses more than 300,000 acres, very little of this area is suitable winter range, which means the annual migration to the refuge is crucial to the herd's existence.
This natural system of predators may even be starting to work in Grand Teton: Five wolf packs in and around the park are helping to restore a natural balance while providing magnificent wildlife viewing for park visitors.
The refuge: the National Elk Refuge--in the shadow of Grand Teton and Yellowstone National Parks--may be doing more to harm elk than anyone would ever expect
The Grand Tetons will outlast us; so will Yellowstone and the Grand Canyon and Mount Rainier.
Grand Teton National Park holds a sacred store of memories for a conservationist and nature writer.
Places of the Heart
Every ride in Grand Teton National Park offers views of the park's namesake mountains.
This 30-mile round-trip ride offers views of glaciers, Jenny and Leigh lakes, and, of course, the 13,770-foot Grand Teton. Stop for lunch at Jenny Lake Lodge.
On a bicycle built for tours: five guided rides around the West - and one to try on your own
The Wildlife of the American West Art Museum, with more than 350 works in its permanent collection, has moved to new quarters in downtown Jackson, just 5 miles south of Grand Teton National Park.
New quarters for wildlife art in Jackson Hole
Thank you for the eye-catching article about Grand Teton National Park (August, page 82).
Happy travels
On its 50th birthday, Wyoming's Grand Teton National Park offers big views, big peaks, big surprises
Even now, several hours later--after a quick breakfast, a van ride to a bend of the river called Deadman's Bar, and the launch of our raft for a float through Grand Teton National Park--the air is still chilly.
Tall in the Tetons