Calculations of algebraic expressions. In graphic calculations numbers are usually represented as directed segments on a line. A unit segment is selected, which serves as the scale of the graph. One direction on the line is taken to be positive. Segments representing the positive numbers are laid off in

Figure 1. Representation of the numbers 1, 3, and -4 by directed segments on a line

this direction; negative numbers are represented by segments laid off in the opposite direction. In Figure 1. the segments M0M, A0A, and B0B correspond to the numbers 1,3, and -4. (Here, the positive direction is to the right.)

Multiplication and division are performed by using proportional segments, which are cut off by parallel lines on the sides of an angle (MA and BC in Figure 2). Segments I. a, b. 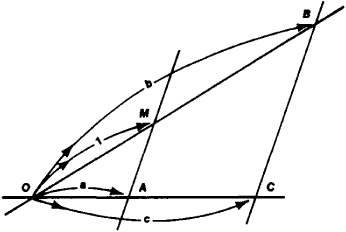 and c are constructed in this manner, and their lengths satisfy the ratio a: 1 = c: b, from which c = ab or b = c/a. Hence, knowing the length of two of the three segments a, b, and c, it is always possible to find the length of the third, that is, it is possible to construct the quotient or product of two numbers. The unit segments on the lines OB and OC need not be the same.

Combining the operations of addition and multiplication, we can graphically calculate such expressions as

and the weighted mean

Raising a quantity to a whole higher power can be graphically done by repeated multiplication. Graphic calculation of the values of a polynomial

is based on expressing the polynomial in the form

and successively graphically executing operations, beginning with the expression given in the innermost parentheses. 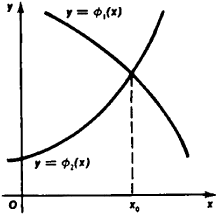 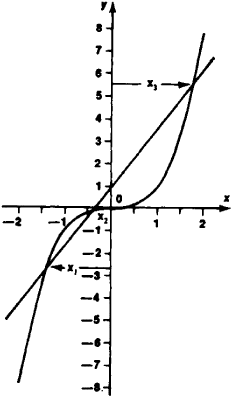 The first equation is a parabola (which is the same for all fourth-degree equations), and the second, a circle with radius r and center at(x0, y0); the coordinates of the center are easy to calculate from the coefficients of the given equation. 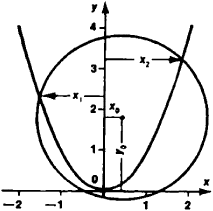 where Δxk is the length of the base of the kth rectangle and its height y* is one of the values of the function >• =f{x) on the segment Δλ>. This expression gives 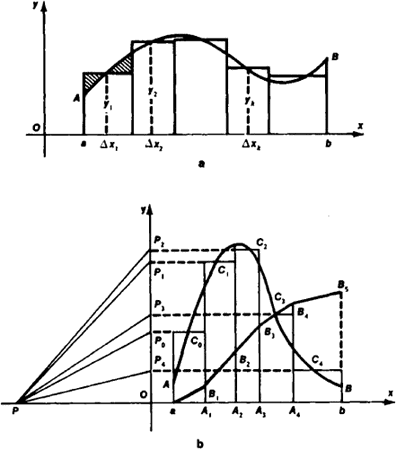 Figure 6. Graphic integration an approximate value for the integral

ykΔxk can be calculated graphically in the manner discussed above. Figure 6.b shows all the constructions needed to calculate the integral

(where the function y=f(x) is given by the graph AC0C4B. After dividing the curvilinear trapezoid by lines passing through the points A, .....3,A4 one constructs the rectangles. Their heights, the ordinates of the points C0.....C4, are laid off on the y-axis. The resulting points P0.....P4 are joined to the p point P (OP = 1). Then, beginning with the point a, the polygonal curve aB1, . . . Bs is drawn, the segments of which are parallel to the corresponding segments PP0PP,1.....PP4 The integral is numerically equal to the ordinate of point B5. To construct the graph of the antiderivative of the function y= f(x) (that is, one connects the points of the polygonal curve obtained when calculating

Graphic differentiation. The graph of a derivative can be constructed using the slopes of the tangents to the graph of the given function at its various points. This method is not very precise due to large errors in determining the directions of the tangent lines. The graph of a derivative can also be constructed using secants and repeating in reverse order the process of graphic integration depicted in Figure 6,b. For this purpose we draw lines parallel to the y-axis and separated by a fixed distance. Ax These lines intersect the graph of the functions in points A1, A2 (Figure 7). Then we draw segments AB1, A1B 2, . . parallel to the x-axis. The segments B1A A1, B2A A2, are equal to the corresponding increments of the function. These segments are now drawn from thex-axis. A step curve is constructed through the resulting points A1A2..... Now a curve is drawn such that the curvilinear triangles within a given step have equal areas. This curve is the graph of the derivative.

Graphic integration of differential equations. A differential equation of the first order dy/dx = f(x, y) defines a direction field in the plane. The problem of integrating the equation consists in drawing curves whose tangents have the same direction as the field. Various methods of graphic integration amount to stepwise construction of integral curves, whose tangents have prescribed slopes. To a large extent these methods duplicate the numerical methods of integration. 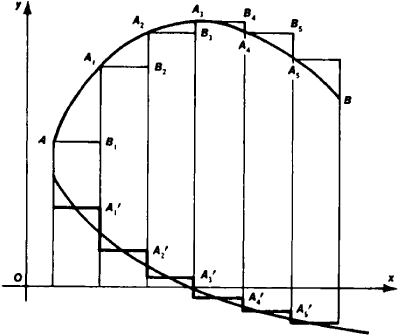