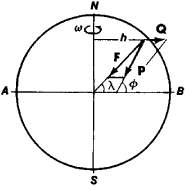 At all points in a region whose dimensions are small compared with the earth’s radius, the force of gravity can be considered to have the same magnitude and direction—that is, it can be considered to form a uniform field of force. In this field the potential energy of a particle is Π = Pz, where z is the particle’s coordinate measured along the vertical upward from some initial level. When the particle moves from the position where z = z1, to the position where z = z2, the work done by the force of gravity is A = P(z1 – z2) and is independent of the particle’s trajectory and of the law governing the particle’s motion. The action of the force of gravity has a considerable influence on nearly all phenomena and processes occurring on the earth, both in nature (including animate nature) and in technology. (See alsoGRAVIMETRY.)