methods of separating minerals from barren rocks by using the difference in densities. Gravity dressing is the oldest method of dressing minerals; it was used 2,000 years before the Common Era to treat tin and gold placers in the southern Urals and the Altai. Gravity dressing devices such as K. Frolov’s gold-washing machines, which were the prototypes of modern machines, were built in the 14th and 15th centuries. G. Agricola (16th century) described gravity dressing in detail, and one of the first scientific groundings of the process was given by M. V. Lomonosov.

Gravity dressing was used most extensively at the turn of the 20th century, when the extraction of minerals increased markedly and the flotation method, which was competing successfully with the gravity method in the beneficiation of fines, was only beginning to develop. Gravity dressing has not lost its utility; this fact is connected with its main advantages, cheapness and the possibility of separating by different methods mineral particles of a wide size range (0.1–300 mm).

Gravity dressing is done by means of water and air. The separation is sharper in water because of its higher density. However, dry (so-called pneumatic) dressing is advantageous in many cases, since it does not require dehydration of the products of dressing. This is particularly important in regions with a severe climate, where freezing of concentrates (for example, coal concentrates) hampers their transportation. In gravity dressing the force of the earth’s attraction is generally used (hence the method’s name); in some cases centrifugal and electromagnetic forces are used together with gravity.

The theory of gravity dressing is based on determining the relative speeds of movement of particles of various density and size in a medium with a different density. The first theories of gravity dressing were developed by P. Rittinger (1867). The theory was substantially developed in the works of G. Ia. Doroshenko (1876), S. G. Voislav (1884), V. A. Gus’kov (1908), R. Richards (1908). and T. Finkei (1940), and particularly P. V. Liashchenko (1940). At first, methods of determining the rates of fall of single particles were developed. If the difference in speeds is great enough, separation occurs: high-density particles are situated below, and those of lesser density are situated in the upper part of the layer. With such an approach, in order to separate the particles according to density they must have relatively similar sizes (otherwise a very coarse grain of low density would fall at the same speed as a small grain of high density, and they would not separate). However, that principle has not been borne out in practice, and separation has occurred. Attempts were made to eliminate the variance between theory and practice by introducing the concept of so-called constrained conditions of movement of particles, under which they move in groups. However, it is then very difficult to take into account the laws of mutual friction and motion of particles. An attempt has also been made to treat the process of gravity dressing as a separation of coarse particles in a dense suspension of finer particles.

The modern theory of gravity dressing was developed in the 1960’s by the Soviet scientists E. E. Rafales-Lamarka and N. N. Vinogradov. Particular attention is given to the stratification process and to properties of suspensions in a statistically unstable state.

In beneficiation in heavy suspensions, bits of coal or ore are immersed in a suspension consisting of a weighting compound consisting of fine grains (fractions of a millimeter) of heavy minerals, such as magnetite, or alloys such as fer-rosilicon, in water. The density of the suspension is adjusted by the concentration of the weighting compound in it; it reaches 3 g/cm3. Pieces whose density is greater than the density of the suspension sink to the bottom; pieces that are less dense rise to the surface and are removed by paddles. This gives the most exact separation of fragments, even with small density differences. Another advantage is the possibility of beneficiating the largest fragments (up to 300 mm). The disadvantage of the method is the need to regenerate the particles of the weighting material. This method of gravity dressing is widely used in the coal branch of the mining industry, where its role is comparable with that of jigging, as well as in the ore branch (for example, in beneficiating diamond ores). The use of so-called gaseous suspensions. which are a fluidized bed made by passing compressed air through a porous base on which the fine weighting material is spread, is promising. In such a fluidized bed the heavy particles sink and the light particles float, almost as with aqueous suspensions; however, dry materials are produced by this method.

Concentration on tables and sluices is based on the settling to the bottom of small, heavy grains of high density when a mixture of water and particles smaller than 1 mm flows over a sloping plane surface. Various types of equipment are distinguished according to the method of separating the heavy fraction. Concentrating tables have a grooved plate that oscillates at right angles to the flow, and minerals of different density form a sort of fan on the plate. With sluices and buddies the heavy minerals are collected by various templates or napped material that covers the bottom of the conduit. In recent years sloping jet troughs of various designs, which have flat bottoms and narrow toward the end, have been used. The narrowing causes ascending water currents, reinforcing the stratification of the material as it progresses along the trough. The great simplicity and high output of such equipment make it promising. There is extensive use of liquid cyclones, which are often used in connection with heavy suspensions—for example, for beneficiating fine coal. A combination of centrifugal and gravitational forces is also used in screw separators. A special form of gravity dressing is the separation of particles in high-density liquids by means of centrifuges. In magnetohydrodynamic separators, “pseudo-weighting” of the medium is provided by simultaneously applying magnetic and electric fields to an electrolyte.

Gravity dressing is carried out at factories, where the material is prepared and dressed and the resultant products are treated. A diagram of a plant for combined gravity dressing of coal, using a heavy suspension for coarse particles and jigging for fine particles, is shown in Figure 1. Combinations of various methods of gravity dressing, not only with each other but also with other methods of beneficiation (flotation and magnetic separation) and with hydrometallurgy. are often used. 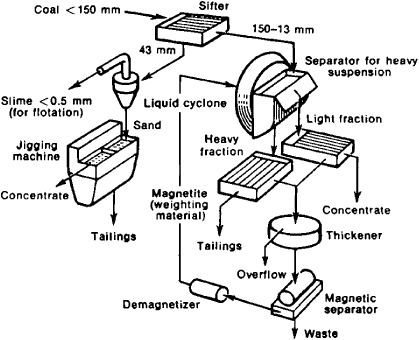 Figure 1. Diagram of gravity dressing of coal using jigging and a heavy suspension

The improvement of gravity dressing is associated with the use of various physical and physicochemical actions on the material being beneficiated and on the medium. For example, the separation of fragments of various densities in a heavy suspension is improved by reducing the viscosity of the medium, by adding peptizing agents, and by the use of vibration. In a number of cases (when beneficiating in liquid cyclones and on concentrating tables and jigging machines) hy-drophobizing reagents and a certain amount of air are added. The output of the main equipment—the jigging machines, separators, and so on—is continually increasing, not only because of an increase in their size but also mainly because of improved operating conditions and design (for example, the use of multiplate concentrating tables).