(redirected from Great Pyramid of Gizeh) 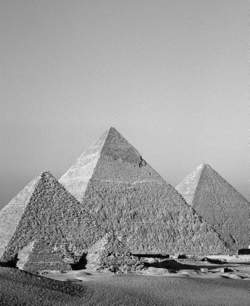 The Great Pyramid of Giza is the most famous of Egypt’s pyramids and serves as a spectacular testimony to ancient beliefs in the afterlife. National Geographic/Getty Images.

Of the seven wonders of the ancient world, the Great Pyramid built by the Egyptian pharaoh Khufu (also known as Cheops or Suphis) as his tomb is the only one left standing, although it has suffered greatly through time. It may be seen as one manifestation of ancient Egyptian religion’s emphasis on death and the afterlife and the culmination of a tradition of creating elaborate tombs by Egypt’s rulers and wealthy elite.

When completed around 2565 BCE, the Great Pyramid stood 481 feet high. Built between 2600 and 2500 BCE, it was the tallest human-made structure on earth until the nineteenth century. Carefully constructed, it was oriented to the cardinal points on the compass, and its blocks were laid with a high degree of precision.

Although the pyramid is mainly solid stone, it does have several rooms, corridors, and escapeshafts. The primary room is the king’s burial chamber, located at the center, which may be reached through the Great Gallery and an ascending corridor. This relatively large room measures 34 feet by 17 feet by 19 feet. The pharaoh was placed in a stone sarcophagus made of red granite, which was also used to line the room’s interior walls.

The pyramid was originally covered with white limestone. However, after the Muslim conquest of the land, the limestone was stripped away and used for buildings being erected in nearby Cairo. The Arab conquerors actually attempted to destroy the structure, but they gave up after taking some thirty feet of stone from the top. Even before the attack on the outer surface, in 820 CE the Muslim caliph launched an exploration of the interior of the pyramid. His workmen burrowed through solid stone until they encountered one of the passageways that then led them to the King’s Chamber and to the second, smaller room at some distance beneath it, popularly called the Queen’s Chamber.

Besides its ancient religious significance, the Great Pyramid has additionally become an object of widespread religious speculation in the modern world. The first wave of speculation, coming on the heels of Napoleon’s foray into Egypt in 1798, derived from the identification of the Great Pyramid with the altar to the Lord mentioned in the book of Isaiah 19:19–20:

In the 1830s Col. Howard Vyse (1798–1853) made extensive measurements of the pyramid’s interior. Based on those calculations, a British mathematician, John Taylor (1781–1864), and a Scottish astronomer, Charles Piazzi Smyth (1819–1900), claimed to have found prophecies embodied in the building’s structure. Taylor claimed the architect was not an Egyptian, but an Israelite. Smyth’s speculations were passed to the British Israelites, who believed that the ancient Israelites continued to exist as the Anglo-Saxon nations of the world. A key to the speculations was the discovery of what Smyth called the pyramid inch, the unit of measurement he believed was used by the builders. His calculations led him to confirm the creation of the earth in 4004 BCE and to announce the coming of Christ in 1881.

Pyramidology, as the science of measuring and discerning the meaning of the Great Pyramid in Christian studies was termed, continued through the mid-twentieth century. It received a major boost by the interest of Charles Taze Russell (1852–1916), the founder of what today is known as the Jehovah’s Witnesses. In 1940 a British researcher, Adam Rutherford, founded the Institute of Pyramidology and issued a multi-volume set of books that summarized the speculations. The institute’s work is carried on by the American Institute of Pyramidology, located in the Chicago suburbs.

Christian pyramidology gave way to esoteric speculation on pyramids in general and the Great Pyramid in particular in the later twentieth century. Of course, as early as the 1880s, Ignatius Donnelly (1831–1901) had suggested that the pyramid was built by former residents of Atlantis, an idea carried on by Manly Palmer Hall (1901–1990) and Edgar Cayce (1877–1945).

In the 1970s speculation emerged that the pyramid structure itself concentrated a form of cosmic energy. The idea was initially broached by a Czech engineer, Karl Drbal, whose work was described in the best-selling book Psychic Discoveries behind the Iron Curtain (1970). This book, the source of a variety of activities pursued by people in the New Age movement, described Drbal’s use of a pyramid to sharpen razors. Used razors could seemingly be regenerated by placing them under a properly aligned pyramid at the place of the King’s Chamber in the Great Pyramid.

Several authors used the brief treatment of Drbal’s pyramid to create a whole mythology of pyramids, including the notion that people could sit within large pyramid structures to receive healing power or find stimulation for psychic development. Individuals experimented with using small pyramids to mummify food. The fad continued through the 1980s. By the 1990s, the lack of any real verification of the many anecdotal stories concerning the reality of a unique pyramid energy led to the demise of this latest form of pyramidology.